Home Story The Problem Of Plenty: Steps To Beat The Hunger Pandemic

The Problem Of Plenty: Steps To Beat The Hunger Pandemic

Now, we have the hungry and COVID-19, simultaneously. A deadly combination, especially for the migrant poor. Still, we can feed all our people, if only we organize our people and our public services properly, including by protecting them fully against COVID- 19.
K.R. Venugopal | Apr 21, 2020 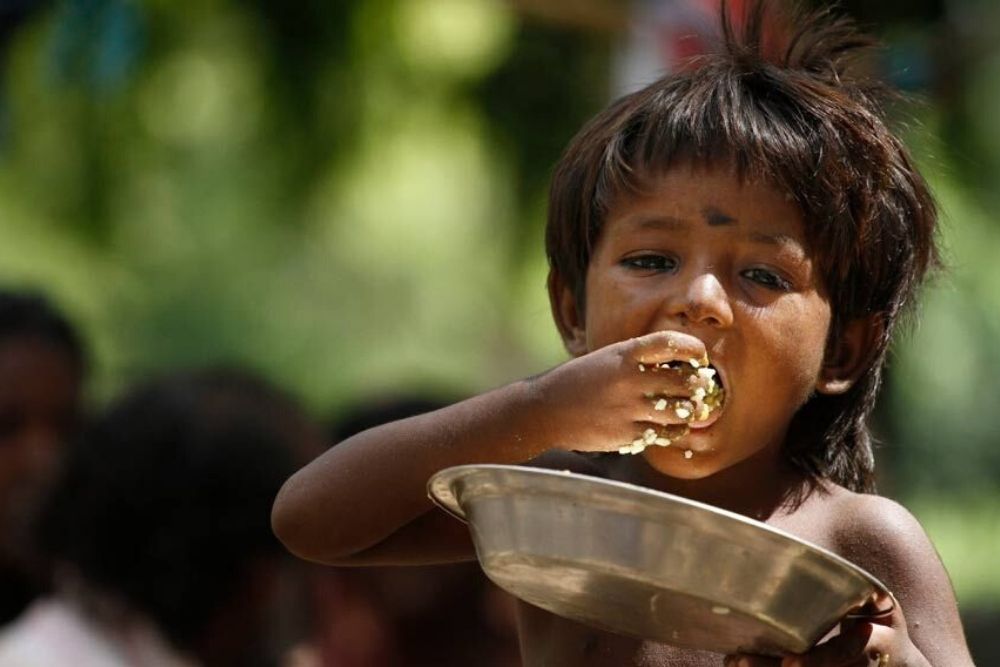 The Minister of Consumer Affairs, Food and Public Distribution has gone on record saying that the country has food grains stocks of the order of 53 million tonnes, of which rice is about 30 million, and the rest wheat. I may add that this is far in excess of the buffer stock norms we need to maintain, - of 7.6 million tonnes of rice and 13.8 million tonnes of wheat or a total of a little above 21 million tonnes of food grains.

What we do not readily acknowledge, however, is that at the same time the number of people who are going hungry in India is about 200 million or 20 crores, reflected in these huge stocks. This is the chronic food security story of India repeating itself. What should be with the poor households is in the warehouses. And now a huge Rabi harvest is waiting to be gathered and stored. As per the estimates for 2019-20, total Food grains production in the country would be a record 292 million tonnes, which is higher by 6.74 million tonnes than the production of food grains in the year gone by.

Now, we have the hungry and COVID-19, simultaneously. A deadly combination, especially for the migrant poor. Still, we can feed all our people, if only we organize our people and our public services properly, including by protecting them fully against COVID- 19.

The key for this would be the Public Distribution System (PDS) and the Integrated Child Development Services (ICDS, - Anganwadi) Programme Infrastructure that we have built, and the Personnel we have recruited and trained, over a period of 40 years in these services. The ICDS personnel are in every village of this country. The size of the ICDS personnel at around 1.7 million is perhaps larger than the combined strength of our armed forces. They are verily the social warriors.

At a time when the nation is locked down in the face of a marauding COVID-19 crisis, its impact on our migrant population mainly in the unorganised sector is an existential crisis. The logic of the COVID-19 combat is it restricts movement as a first step of its resolution. However, the essence of the Indian unorganised sector’s existence or its very survival is dependent on internal migration, - inter-state and intrastate, calling for movement. The logic of unorganised sector migration is hunger. This conundrum is no easy problem to solve. So, we have to find solutions reconciling these two illogical logics. Hunger is the supreme ruler in this situation. And so, it appears is COVID-19 with no vaccine in the horizon. How can we help ourselves in this crisis?

Naturally, the Prime Minister is in the thick of this crisis as the leader. He should consider mobilising the PDS and ICDS personnel and infrastructure, alongside the Medical and Health human resources, as the first line warriors in this battle. Fundamental to this strategy will be facilitating measures of controlled movement of personnel and road transport in terms of logistics, encouraging the spirit of true federalism between the Union and the States. The institutions involved are the Union’s FCI, RBI for central pool food grains supplies and adequate credit supply; and the States’ agencies for transportation and distribution at the village level.

This will depend upon how rationally and maturely the decisions to allow movement of our migrant population in the coming days that our union and federal leaders would take together, based on advice from the ICMR, virologic and other health experts. It is a very delicate balance.

Like we did in the past to determine prevalence of distress in drought/ famine conditions by opening “test public works”, we should now open free kitchens in all self- selecting areas like urban bastis of the poor and the settlements of the poor in villages, and carry out a quick inquiry of where the migrants and the hungry elsewhere are. That will show us the exacerbated hunger geography levels in the country at this hour. That will also be a pro-active way of feeding the poor by offering them hope of food and solidarity. The hungry are bound to be everywhere and therefore this feeding should be done everywhere. Start in bastis in all urban areas; and start in all rural areas from dry land agricultural areas, upland areas, tribal areas, drought-prone and desert areas. This way, we can cover almost all the hungry people of India, who are nearly 20 crores. The Anganwadi Centres and Anganwadi Workers, with extended working hours, would be the ideal starters to begin this massive counter action. They have a place to call as their own, however rudimentary, and known to every villager and basti dweller of the country. We have to guarantee them all required protection in every possible manner, including enhanced remuneration and a variety of protective equipment and medical supplies, and trained to practise social distancing. And family insurance for each of them.

Delivery system is all important. Southern states have fine models of village level delivery of PDS and ICDS commodities. This can easily be done in Telangana; AP; Tamil Nadu; Karnataka and Kerala. The model for Northern States would be how we conduct general elections like identifying routes to nooks and corners of our country and station ourselves in the most distant outposts. For these, all Government personnel should be summoned and mobilised with substantial additional remuneration given, and trained to practise social distancing and use of protective gear. And family insurance as well.

Feeding must be universal. People, with or without identity cards, - though those without identity cards should be provided with them after a summary spot enquiry. That is vital for their dignity. However, we can issue temporary ration coupons to the migrant workers and those similarly placed like them, valid for the period of the lockdown. It has been seen in Hyderabad by COVA, an NGO that many migrants carry with them Aadhar Cards with address of their native places to confirm they are migrants. Their Aadhar Cards, though should not be mandatory but where carried, can be used as basis for issuing the temporary coupons and they can avail food grains from regular ration shops or from food camps to be started. A summary spot enquiry will enable Government officials and the local public to know migrants/ other poor in hunger and in need of food. The key here is being liberal in feeding the poor, consistent with their right to their dignity. This approach has been initiated in Telangana state by the Chief Minister K. Chandrashekhar Rao, who has given convincing assurances to the migrant population in Hyderabad through Government orders.

Once Government takes the lead, donors and voluntary workers are bound to join the effort in a big way because feeding people in want is prescribed in all religions as charity-related action.
People of India delight in feeding the poor, if asked.

The MGNREGA should immediately include the much-ignored food grains component in its wages, limiting that component however to the actual daily needs of the participants, - say 2.5- 3 kg per family per day. This will guarantee real wages.

COVA, in Hyderabad, is using a survey format of all family and individual details required to determine the migrant population without any sort of identity cards. These include information on any special conditions like widowhood, old age, being orphaned, and affected by medical conditions like diabetes and blood pressure. This should be done in all States. Obviously, formats can be adopted to suit differing conditions.

If Test, Test and Test is the mantra, Feed, Feed and Feed should be the Mantra to give sense to the former.

Finally, let not all the huge incentives, those lakhs and thousands of crores be only about the captains of industry. Let that be about the people of the nation whose health alone can keep the wheels of the economy spinning. Let our Anganwadi kitchen gardens bloom with vegetables and our dry land farms with health-giving millets. That way our warriors will be strong enough to fight the Corona enemy.

(K.R. Venugopal, a former Secretary to the Prime Minister, is author of two books- “Deliverance from Hunger, the Indian Public Distribution System”; and “The Integrated Child Development Services Programme, - A Flagship Adrift”).