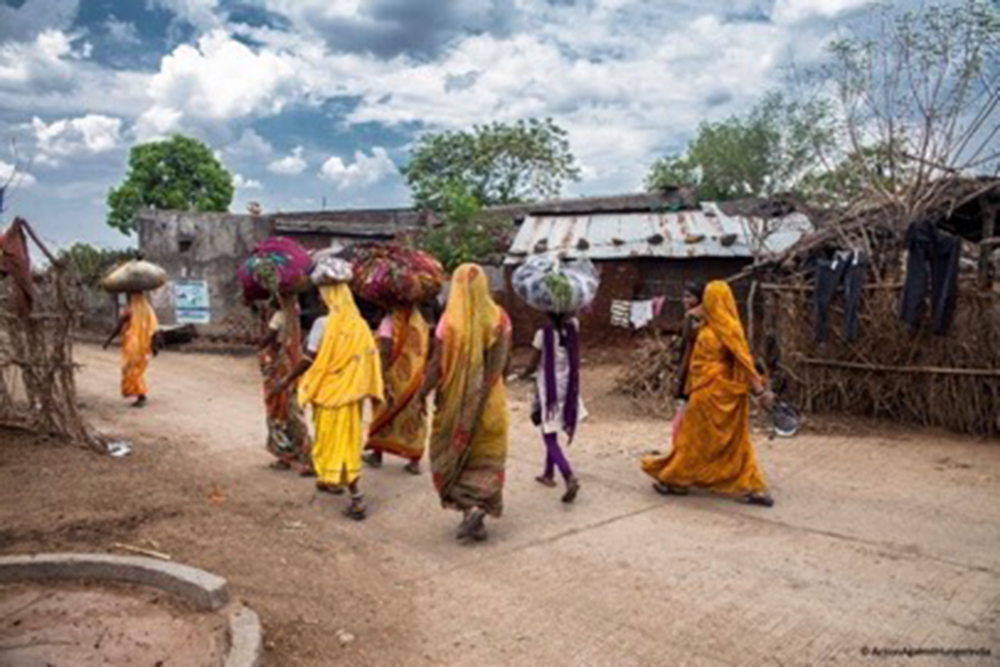 Research shows that 44% of tribal children under-5 in India are stunted, 45% underweight and 27% wasted. Severe stunting in tribal children is 9 points higher than in non-tribal children (29% vs 20%), according to Action Against Hunger India.

Despite the Constitution guaranteeing them special status to safeguard their rights and culture, India’s 104 million tribal population continues to suffer from poverty and malnourishment, with children facing the brunt. Constant migration to urban areas in search of livelihood and adverse climatic conditions compound their suffering.

Health and healthcare services in tribal areas have long been neglected, and in order to bridge the gap acknowledgment of the problem is required as well as build a roadmap for the future.

Seasonal migration of tribal communities is a centuries-old practice. Unstable livelihoods and agricultural distress pushes the Sahariyas to become seasonal migrants, who travel to work in agriculture and construction sectors in neighbouring states every year. In Rajasthan and Madhya Pradesh, Action Against Hunger has been working with a section of the migrating population since 2011. Among the key reasons for tribal migration, are access to food and safe water and legal land. However, constant migration makes the tribal women and children most vulnerable to nutrition and health issues.

In Rajasthan and Madhya Pradesh, seasonal migration is mostly of two kinds, Naward - ‘forest migration’ and Palayan - ‘migration motivated by daily labour or cash-earning activities’. In the second type, the entire household migrates, including pregnant and lactating women and children of all ages. Here, the proportion of children left behind to other caretakers (grand-parents for instance) seems to be quite minimal for a number of reasons: very limited resources at disposal of the non-migrating members of the family, the cost of paying them back upon return, the risk of having to come back if the child becomes badly sick, etc.

Another negative factor is that the children do not receive any kind of education while on migration, and in addition it also prevents them from accessing government nutrition schemes. Palayan, however, has some benefits as migrants have better access to quality food, which they are able to purchase from their wages.

Action Against Hunger’s field experience indicates that tribal families migrate during the winters to work at brick kilns, construction sites, mines, and for railway work. The harvesting season sees the bulk of migration happening during the spring break. The monsoon season is usually reserved for short-term forest migration – for harvesting sugarcane, cotton etc. Such seasonal frequent migrations leave the tribal children vulnerable to malnutrition, vector and water-borne diseases.

The constant migration also hinders the process of recovery of the malnourished child even if the child is covered under a nutrition programme. The odds of a migrating tribal child not cured under a programme can go to as high as 280%.

The marginalized community needs to be ensured proportionately distributed resources so that future generations have better living standards. Lack of Primary Health Centres (PHCs) is another factor. The Rural Health Survey 2017 shows that within the tribal-dominated states and areas, Rajasthan has 52% and Madhya Pradesh 53% shortfall of Primary Health Centers. This is compounded by an acute deficit of healthcare service delivery personnel, which in turn leads to greater risks linked to migration.

Another aspect is the role of climate. Droughts and destructive monsoons and catastrophic weather force families to migrate further, increasing their vulnerability, which again affects the women and children the most. This leaves families with limited options to work on their cultivatable agricultural lands, restricting their economic growth. The tribal lands are usually monopolized by industries.

The persistent concern and the hidden epidemiology of tribal undernutrition, and any resilience whatsoever, will be based on six major trends analyzed by the Inter-Agency Research and Analysis Network (which works with Action Against Hunger) that will continue to shape the context throughout the coming years. Among the six trends, caste and tribal -based discrimination is a key one, along with gender-based discrimination, legal context, corruption, unemployment and underemployment and the pro-breastfeeding lobby.

The government’s Poshan Abhiyaan (National Nutrition Mission) is a well-laid out mission to address malnutrition in the country. In addition, the Virginius Xaxa Committee on Tribal Affairs (formed in 2013) has already submitted its report (India’s first comprehensive tribal health report ) highlighting many governance and administrative issues, without which the health of the tribal people cannot be guaranteed. The concern, however, is that no specific policy has been streamlined to address the issue of tribal undernutrition that will cover migration with nutrition-specific interventions.