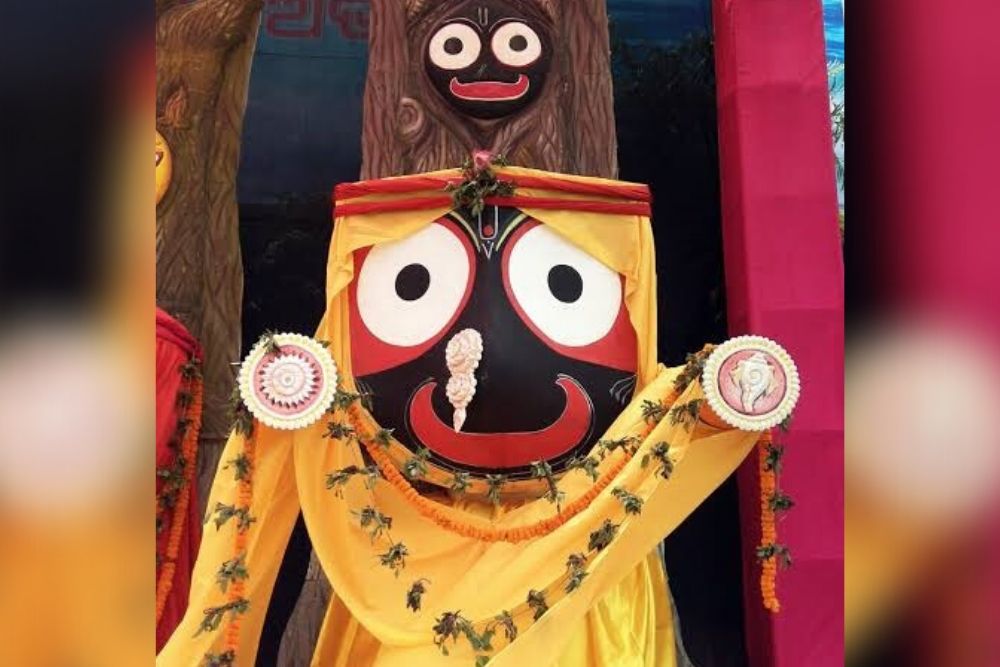 What’s Cooking In The World’s Largest Kitchen On Makar Sankranti Day? A Sneak Peek Into The Jagannath Temple Kitchen

The Ancient Harvest Festival Of Makar Sankranti, Celebrated To Welcome The Summer, Sends Out A Message Of Community Nutrition. A Look Into The Best-Loved Bhoga Of Lord Jagannath In Puri Reveals A Recipe That Is Unique As Well As Nutritious

The Jagannath temple in Puri is one of the chardhams—the four most revered pilgrim spots—of Hindus. Every day, at all hours, the majestic 12th century temple by the Bay of Bengal in Odisha is a bustling sea of humanity—devotees offering prayers, fulfilling vows, sitting in silent communion or waiting patiently in queues snaking around the 4,00,000 sqft temple courtyard—for a darshan of Lord Jagannath, Lord Balabhadra and Devi Subhadra, the reigning deities. As colourful flags flutter atop the 200-ft temple tower, cymbals chime, bells rings, conches blow and chants rise—for a devotee, it is like fulfilling a lifetime's aspirations.

For die-hard devotees, however, there is a special area of the temple that draw the eye: the temple kitchen. Considered to be the largest kitchen in the world, a variety of at least 56 meals, or “bhoga” in Odia, are cooked in the kitchen every day for the deities, over wood-fire and in earthen pots. The sacred “mahaprashad” then feeds a staggering one lakh people a day. “It is believed that food never falls short in the temple kitchen,” Arabinda K. Padhee, Country Director, International Crops Research Institute for the Semi-Arid Tropics (ICRISAT) and Ex-Chief Administrator, Shree Jagannath Temple Administration (SJTA), told Outlook Poshan. “The mahaprasad is rich in micronutrients, cooked in the most nourishing manner and addresses the calorie requirements in a proper way,” said Basanta Kumar Kar, who is also known as the ‘Nutrition Man of India.”

On January 15, as the harvest festival of Makar Sankranti, celebrating the end of winter solstice, unfolds, the entire temple is devoted to preparing a special kind of bhoga, known as the “Makara Chaula,” or Makara rice. According to temple legend, the dish has a special significance on this day. According to the Skanda Purana, sage Kashyap observed the day to please Lord Jagannath. Goddess Lakshmi returned on this day with Makara Chaula from her parental home—which was then offered to the Lord Jagannath. Keeping true to its ritual significance, people take a holy dip in the sea, offer prayers to the Sun God, with red flowers on a copper plate, before partaking the bhoga.

The bhoga, once prepared, is carried around the temple by the sevaks, a practice known as “Makara Bedha.” As tradition goes, the three deities are painted with lime and covered with cloth, before being served the Makara Chaula on three silver plates. Prepared from harvested rice, the dish comprises of banana, jaggery, sesame, milk, ghee, coconut, freshly-made butter, fruits and dry fruits.

A delight for its sweet taste, the dish is high in nutritive value. For instance, jaggery is loaded with properties that help in digestion. Rich with anti-oxidants and minerals, such as zinc and
selenium, jaggery prevents early ageing. Sesame forms blood cells and helps in burning excess fat in our body. Herbs, such as cardamom and black pepper, are potent antioxidants, bringing the sweet dish to life. Coconut adds a distinct flavour to the delicacy. It’s also heart-friendly and controls blood sugar levels in our body.

Not just the temple, almost every household in Odisha offers the bhoga to the deities. Surya mantra is chanted to invoke the blessings of the Lord, before the bhoga is shared with family members. Donation and charitable activities are also carried out on this day, to observe the festival, especially sweet items prepared from sesame seeds and jaggery. Enriched with fats, proteins , carbohydrates, and vitamins, it’s a dish that is meant to impact collective nutrition levels.

Makar Sankranti is celebrated in several other states of India with different rituals and names, such as, West Bengal, Assam, Rajasthan, Uttarakhand, and many other states. It is known as Lohri in Punjab and North India, which is considerable celebrated by Sikhs and Hindus in North India; “Sakraat” in Rajasthan; “Uttarayan” in Gujarat, etc. Despite the uniqueness of celebration in each state, there is something common all across: the use of jaggery and sesame. In Punjab, people traditionally consume khichdi and jaggery, to welcome summer. In Goa, Sankranti involves distribution of sweets in the form of granules consisting sugar-coated sesame seeds among the family members. In Assam, shunga pitha, or rice cake, is an important part of the celebrations, while in Maharashtra women exchange Til-gul laddoos, made out of sesame and jaggery.

Tradition often becomes a meaningless litany of rituals in modern times. Why not take a new look at the message of good nutrition hiding in our tradition on this day?