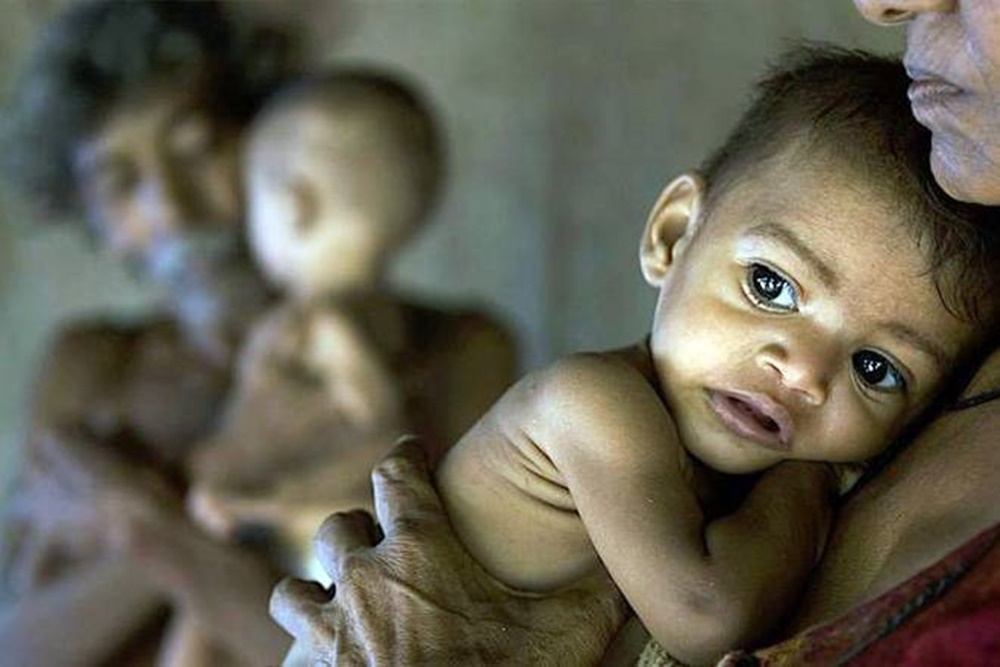 Among the many public health challenges that India faces, malnutrition is one of the most critical and continuous one faced by the country. Malnutrition impairs the immunity of children and makes them prone to death and diseases in early stages of life.

According to a study conducted by Lancet in 2019, two in three under-5 deaths in India were due to malnutrition. Besides the increase in public health burden due to disruptions in health and well-being, malnutrition in children also directly impacts the socio-economic progress of a nation. According to a study carried out by the Council on Hemispheric Affairs or COHA (2020), malnourished children have lower self-esteem and confidence which further reflects in decreased economic productivity. The report released by World Vision India in 2020, estimated an 8 per cent reduction in economic growth due to an increase in malnutrition.

Unfortunately, India holds the maximum burden of malnourished children in the world and the arrival of Covid-19 pandemic has further intensified this burden. The lockdown enforced to curb the pandemic saw closure of schools and as a result suspension of the Mid-Day Meal Scheme. As compared to 2019, the total offtake of cereals under Mid-Day Meal Scheme fell by over 60,000 tonnes for the months of April and May 2020. The decline in household incomes due to joblessness and migration along with changes in the availability and affordability of nutritious foods and interruptions to health have pushed the vulnerable and economically poor families deeper into malnutrition. Even before the pandemic, 68.2 per cent of 1.04 million deaths in children under-5 years was attributed to malnutrition and if not given due attention, this number could increase by 10-20 per cent due to Covid-19 (Lancet, 2019).

Besides, the poor ranking of India, an abysmal 94th out of 107 countries on the Global Hunger Index 2020, calls for concrete measures to be undertaken to prevent any irreversible damages to the health and lives of children after the Covid crisis. Malnutrition is also an obstacle to effective immunization in children. It has been argued that since malnutrition leads to immunodeficiency, vaccines and drugs may not be as effective. This is a serious obstacle as immunization of children against various diseases is an all-important health goal.

Malnutrition in children is a direct result of poor or inadequate nutrition in the early years of life. It usually stems from maternal malnutrition, the impact of which lasts across generations. To put it simply, “Undernourished mothers (Micro-nutrient deficient) give birth to undernourished infants (low birth weight) who become undernourished children (Stunted, Wasted, Underweight). The under-nourished girls then grow into under-nourished adolescents who later become under-nourished mothers and the vicious cycle continues. According to National Family Health Survey (NFHS)- 4 conducted in 2015-16, around 50 per cent of women in the age of 15-49 years in India were anaemic, 38.4 per cent of children under-5 years of age were stunted (low height for age), 35.7 per cent were underweight (low weight for age), 21 per cent were wasted (low weight for height) and 7.5 per cent were severely wasted.

While poor nutrition is a direct cause of malnutrition, an indirect factor that reinforces this intergenerational cycle of malnutrition, particularly in a developing country like India is the underlying issue of gender discrimination. The right to marry, complete an education or make reproductive and sexual health decisions are not recognized for many women and girls in India. According to NFHS-4, only 35.7 per cent of women had more than ten years of schooling, 26.8 per cent of the women in the age group of 20-24 years were married before they turned 18 and 7.9 per cent of women in the age of 15-19 were already mothers.

Though India has made some positive gains in reducing both nutritional and gender-linked indicators as brought to light by NFHS- 4, the rate of growth has been rather sluggish. To make the matters worse, one of the nutritional indicators that have seen a concerning reversal in the last decade is the prevalence of child wasting. Wasting or Acute Malnutrition is the result of rapid weight loss in children, usually in combination with infections. According to a study published in the journal Global Health Science in July 2020, India has the highest number (approx. 9.3 Mn) severely wasted children in the world. And the possible weight loss due to immediate food shocks induced by the pandemic is expected to push another 5 million children in the wasting category and additional 2 million children in the severe wasting category. The high proportion of wasted children is a serious cause of concern as children who are chronically wasted are at a higher risk of stunting and are nine times more likely to die than their well-nourished peers if left untreated.

Therefore, it is of utmost importance that the highest priority is accorded to interventions that tug at issues of both poor nutrition and persistent gender inequalities. This can only be successfully achieved through a community-based approach, wherein effective sensitization of both men and women coupled with programmatic interventions designed at the local level using local resources need to be adopted.

In the current Covid-19 situation where mobility has been restricted and access to healthcare services has been compromised, CMAM can act as a catalyst to reach children living in remote and hard to reach areas. On the gender front, a community-based approach enables field functionaries to develop strong relationships with the community that in turn helps them to educate and sensitize people about the importance of maternal nutrition, the right age of marriage for girls, the need for family planning, women’s empowerment, and gender-based violence. This continued engagement with the community leads to a change in the attitudes and behavior of both women and men around gender and nutrition, therefore further enhancing focus towards maternal and child nutrition and improvement in other dietary practices. States such as Rajasthan, Gujarat, Uttar Pradesh, Jharkhand, and Bihar have seen beneficial outcomes already.

Therefore, the backsliding of nutritional indicators in the NFHS-5 data (2019-20) is a wake-up call to prioritize community-based practices if we are to see benefits at scale. India has been long struggling with sub-optimal resources, supplies and workforce, and the Covid-19 has only exacerbated the situation. In addition to the policy level intervention for the treatment of Acute Malnutrition with standardized alternatives at the national level, the major thrust needs to be on convergence across all sectors such as health, nutrition, education, and social empowerment to reduce the gender inequalities and improve the public health outcomes. If implemented well, a community-based approach can battle against the inter-generational cycle of malnutrition and is a long-term investment that will benefit both present and future generations.

(The author is a former Director-General, Indian Council of Medical Research. Views expressed are personal, and do not necessarily reflect those of Outlook Magazine)