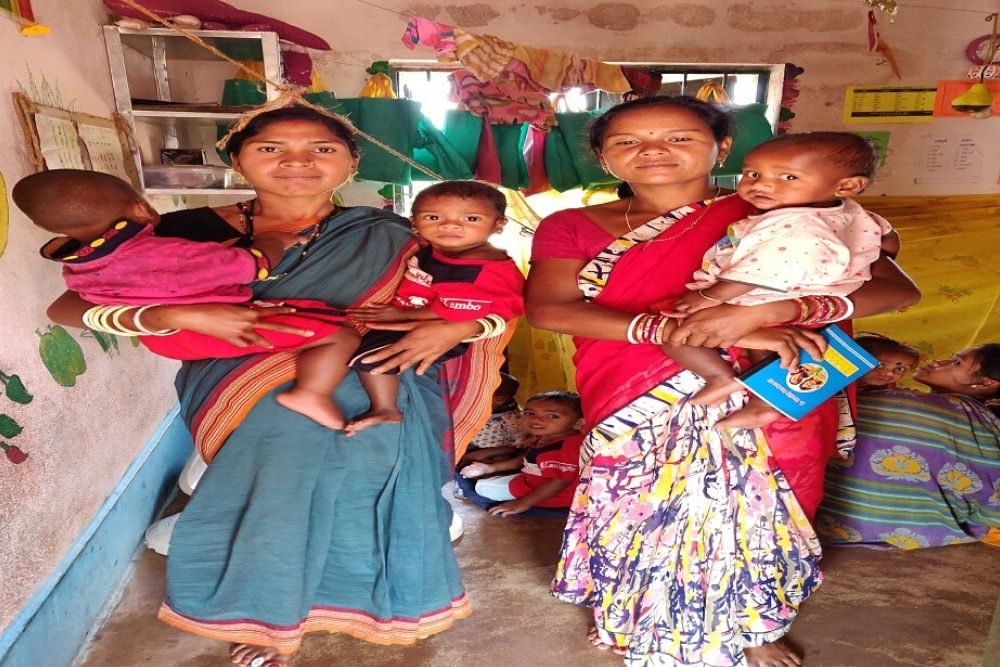 Over 1, 800 tribal children in high-malnutrition pockets of Keonjhar district find succour in creches which feed and protect them while their parents work.

Suniti Mohanta leaves her home early every morning, navigating her way on a two-wheeler across the uneven terrain of Talakainsari village to her first stop for the day – a crèche where around 20 children are waiting for her.

The walls of the crèche are covered with photographs of the children, their drawings, and charts mapping their growth. There are plenty of toys, blankets and beds, and a designated space for breastfeeding. Until recently, the space where this crèche is located used to be a ‘clubhouse’ where locals would hold prayers. Now children aged 6-36 months spend almost eight hours a day here while their parents are busy at work in the neighbouring mining areas, brick kilns or agricultural fields. 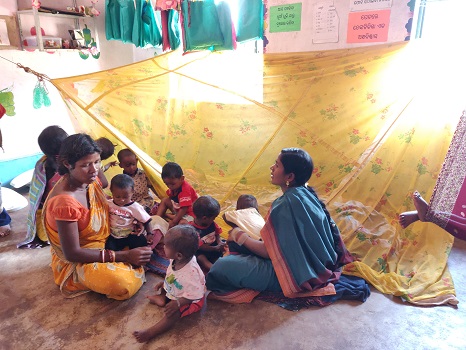 Talakainsari is a village with a population of 622 in Keonjhar Sadar block of Keonjhar district in North Odisha. Eighty-three percent of the village population is tribal. The remote but mineral-rich Keonjhar district is home to over 18 lakh people, 45% of whom belong to scheduled tribes including the Juangs, one of 13 tribes classified as Particularly Vulnerable Tribal Groups (PVTG) in Odisha.

The crèche in Talakainsari village is one of 60 crèches, called Mamata Gharas, which are looking after at least 1, 800 children in high-malnutrition pockets of this district. Ten of these
crèches come under Suniti, who is the crèche supervisor. ‘I visit all 10 crèches every day, stopping at each to check on the workers and the children. We ensure that the children receive proper care here and that they grow up to be healthy,’ Suniti explains. According to the National Family Health Survey (NFHS-4, 2015-16), 44.6% of children below-5 in Keonjhar district are stunted and nearly 19% are wasted. Only one in 10 children between six months and two years receives an adequate diet in the district. To change these outcomes, the District Mineral Foundation (DMF) of Keonjhar stablished the Mamata Gharasunder the DMF Initiated Crèches Against Malnutrition (DICAM) project. 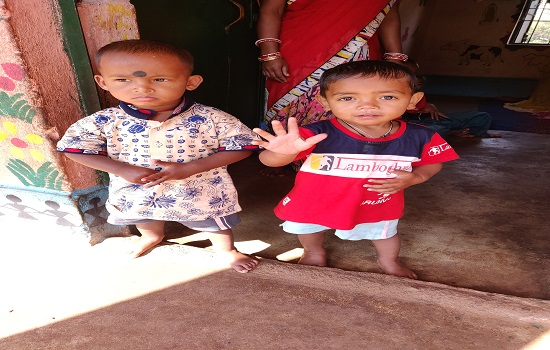 Now, 60 such creches are being run successfully in the district in partnership with the NGO Ekjut. One of 550 such foundations, the DMF in Keonjhar was set up in response to a 2015 amendment of the Mines and Minerals (Development and Regulation) Act, 1957 that mandated state governments to establish non-profit statutory bodies to work for the benefit of persons and areas affected by mining. Each Mamata Ghara can accommodate up to 20 infants and children. Each has a smokeless chulha (stove), a toilet, hand washing station, safe drinking water facility, baby weighing scales, stadiometres to measure height, and infantometres to monitor weight. A kitchen garden, often the source of some of the food cooked at the crèche, flourishes in the backyard.

Also Read| For Food Security, Community Involvement Is The Key

These crèches are important touch points for complementary feeding of children in the critical first 1,000 days, especially in a district with such high levels of undernutrition. The children areprovided three meals – one full and two snacks – consisting of dates, sattu (ground pulses and cereals), khichdi (a mix of rice and lentils), leafy and green vegetables, and payesh (porridge made of rice). These are freshly prepared and served hot, providing the much-needed dietary diversity needed for growth. Very often, these calorie-dense, protein-rich meals meet 70% of the recommended dietary allowance (RDA) for a child below three years. Thrice a week, the meals include eggs.

While the anganwadi centres continue to operate across the state under the Integrated Child Development Services (ICDS) scheme for children between three and six years of age, these crèches aim to address undernutrition amongst children below three, a time when they are specifically vulnerable to malnutrition and need to be fed nutritious food consistently. An important distinction between the two is that the Mamata Ghara provides hot cooked meals to the children while the anganwadi centres hand over the take-home rations meant for the consumption of children to the mother or head of the family once a week or every fortnight. These rations often end up being shared, and there is no way to ensure the child receives her full entitlement.

Children at the crèche are weighed every month and their height is measured thrice a year. Children suffering from severe acute malnutrition (SAM) are identified early and receive special attention at one of the four nutrition rehabilitation centres (NRCs) across Keonjhar district. The crèches are open six days a week and follow the ICDS calendar. Each crèche is run by two workers, usually from the village where the crèche is located, and a supervisor like Suniti. A programme manager monitors operations across a cluster of 30 creches spread across each district.

The workers – preferably matriculate and identified by the local community – are recruited and trained in early feeding practices and on relevant health and nutrition best practices. They monitor the children’ s growth charts, document data on the child’s growth, and share it with parents. The crèches and staff are well connected with auxiliary nurse midwives (ANMs) and other frontline caregivers to ensure that children receive healthcare services on time. ‘To set up these creches, first we hold a meeting in the village with the ASHA workers (accredited social health activists) and local leaders,’ Suniti explains. ‘Our leaders and villagers have always agreed to such initiatives. After that, the two crèche workers are selected. The daily menu is decided by Ekjut, the partner agency in charge of implementing the programm eat this crèche, with approval from the district social welfare office.’ The crèches are also playing an important role in enabling older siblings to attend school more regularly. Typically, an 11-14 year old would otherwise be looking after his/her younger brother/sister while their parents were at work for much of the day. Now, parents are able to leave their babies at the creche and go to work while the older children attend schools. Thus, the crèches are also helping prevent possible loss of livelihoods and wages that would have occurred had there been no day care facilities for their children.

Odisha, one of the eight Empowered Action Group (EAG) states that lag behind in demographic transition and have the highest infant mortality rates, has made significant progress in reducing child undernutrition. According to an International Food Policy Research Institute (IFPRI) report3 that analysed data from 2014-15, Odisha has outpaced richer states such as Gujarat, Madhya Pradesh and Uttar Pradesh in several nutrition parameters. Odisha had better nutrition outcomes, such as stunting levels, and performed better in terms of immediate determinants, including the number of 6-8 month olds receiving solid, semi-solid, or soft foods and the number receiving minimum dietary diversity during complementary feeding. The state had greater coverage of nutrition specific
interventions such as mothers of children younger than three years who received three or more antenatal care checkups and children 12-23 months old who were fully immunized.

A comparison between the third and fourth rounds of the NFHS indicates Odisha’s progress on several indicators between 2005-06 and 2015-16. While 45% of children under-5 were found to be stunted in 2005-06, the proportion of children who were stunted had come down to 34% by 2015-16.4 During the same period, the proportion of underweight children under-5 decreased from 40% to 34%. Odisha also saw improvements in critical indicators like institutional births, full immunization coverage, and reduction in infant mortality and under-5 mortality rates. Significantly, the rate of early marriage also declined for women under 18 years.

‘Pioneering schemes for maternal and child health and nutrition in Odisha have helped the state boost nutrition outcomes,’ says Ashish Thakre, district magistrate and collector of Keonjhar district. One of these pioneering programmes is the Mamata conditional cash transfer scheme under which adult pregnant women, barring government employees, receive Rs 5,000 in two installments if they fulfil certain conditions that are beneficial for their health and that of their newborns. The idea is to promote health-seeking behaviour.

In addition, Village Health and Nutrition Days (VHND) are monitored by field staff who go door-to-door every week and send an SMS to the block level data manager to ensure that outcomes are being monitored. Based on these messages, Thakre reports, it is now possible to track high-risk mothers and infants who may be underweight and undernourished. The mothers then receive a ‘red card’ under the Mamata Scheme (for not having met conditions necessary to avail cash transfers) and each such case is reviewed at the next VHND session.

Another successful state programme is the provision of eggs on a daily basis to schoolchildren under the Mid-Day Meal Scheme to increase attendance in government-run schools. ‘The children now themselves demand eggs,’ Thakre adds with a smile. The civil society organizations partnering on these initiatives bring critical knowledge and expertise, while the involvement of the local community in realising these initiatives and running them on an everyday basis provides the much needed impetus.

The crèche workers, for instance, who are part of the community, sing folk songs, and communicate with the children in the local dialect and are therefore able to connect with the locals and influence change. The community’s response to and uptake of these centres has so far been encouraging.

Draupadi Nayak (name changed) is a young mother who works in the neighbouring coalfields and leaves her child at the crèche in the morning. She visits the facility every afternoon to breastfeed him. ‘My child’s weight and height have improved after I started leaving him here,’ she says. ‘He eats nutritious meals here which are helping him grow better.’

Copyright Seminar Publications. This article was published in Seminar's June 2020 edition titled 'Justice on our Plates: a symposium on how to solve the problem of malnutrition'. Seminar is amonthly journal that discusses various national and international issues. Each issue of the journal focuses on a single problem, bringing together different viewpoints, to provide in-depth insights to our readers and decision makers