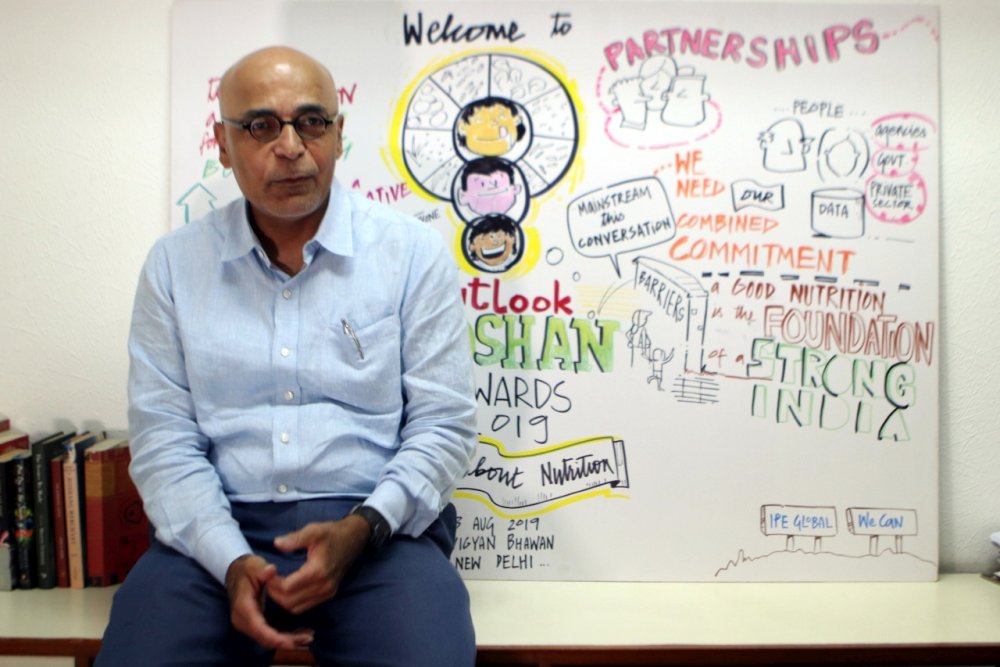 It’s a bright feather in Poshan Abhiyaan’s hat when someone like K “Vish” Vishwanath talks about the transformative potential of Modi government’s flagship programme to make India malnutrition-free. With an extensive track record of research on the role of communication in health promotion, inequity and emergency, the Director of Harvard T.H. Chan School of Public Health India Research Center, is a master of translational communication, informing and influencing public health policy, research, teaching and practice across the world. In this extract from an extensive interview with Damayanti Datta of Outlook Poshan, he explains what is different from the past and how India is embracing the idea of people’s participation in decision-making for the first time. The video of the full interview is attached below:

Q: India has had a range of policies to address malnutrition and hunger. Yet, one-third of the world’s malnourished live in India now. How is Poshan Abhiyaan different from those in the past?

KVV: Conventionally, whenever we try to address social conditions, governments always come up with schemes, policies and programmes. But they have never tried to address the demand side of things, or policies that increase active and informed participation of people in decision-making. What is unique to Poshan Abhiyaan is adding the term “Jan Andolan” and explicitly mentioning that it should be a people’s movement. That is the fundamental difference. What is different from the past is, right from the beginning, they are encouraging people to participate in this movement to stop malnutrition.

This approach will encourage a person not to look at the issue of malnutrition only as a condition, but also as a condition that is unjust, unfair and an issue that needs to be addressed. This issue not only needs the government and its policies, but also the involvement of the general public. That would be a brilliant movement. Now having said that, can a social moment be engendered from the top? No. It is not a social movement. Neither is it social, nor a movement, if it is coming from the top. However, social movement is the core idea. It is culturally resonant, especially if it comes from a credible source. This is what is different happening this time around. The encouragement to make people participate in a movement, to mobilise them to address the issue, has come from a credible source. The Prime Minister has framed the movement as “Jan Andolan,” or peoples’ movement, which implies that malnutrition is a “collective” problem and not just of the government or of the people suffering from it.

Secondly, our country has a rich history of social movements. Starting from the movements before we got independence, until now, when we have become highly mobilised in many ways. To tag it with that kind of a cultural context, and resonating so well with the people, allows the movement to become successful. There is tremendous potential for the people to take it seriously, and mobilise against this injustice. By this I mean that the injustice should not be fought only by one particular group, but the entire society should stand up to this situation and address it.

Q: When you say people, do you mean people most affected by malnutrition, say, tribals, women or Dalits? Do they have the wherewithal to initiate a Jan Andolan? If such a movement is initiated by the upper castes and upper classes, how will it percolate and reach the lowest strata of society?

KVV: When you mention certain groups, women make up a substantive number of our country’s population. Even the poor people in our country are huge in number. Any time you have a social movement, we are going to see three types of people. One of them is the group of people who are suffering, and want it to be mitigated. The second type of people is those who are indifferent to a problem. Such people are the largest in number. It is because they think that their life is picture-perfect, so why should they even bother? The third type of people is those who are opposed to it. Our aim should be to not just to reduce the opposition, or to mobilise the group of people who are already suffering—they already know the intensity of the problem. It is the vast group of people who do not know the issues well that need to be made aware of it. They need to be convinced, that malnutrition and hunger are unfair, unjust, but still addressable. So the idea behind a social movement is to initiate mass mobilisation and to involve all those who are indifferent to the issue.

Q: What sort of work is the Harvard T.H. Chan School of Public Health India Research Center involved with?

KVV: We have been working with the Women and Child Development ministry in Mahashtra, the UNICEF and a few other stakeholders. We are in partnership with a few other people. First, we train the critical stakeholders, which include frontline workers, on using strategic communication principles to raise consciousness on the issues of malnutrition and Poshan Abhiyaan. And, then, how to go about addressing it? So we provide extensive training to the workers on this.

Secondly, India is a heterogeneous country. There are tremendously rich and diverse sets of cultural and dietary practices, different in each place. The question is, how do you learn about what practices are working and which are not working? And how do you share it with other people? So this is what we are trying to do, through workshops. We not only train the frontline workers and the other stakeholders on strategic communications, on mobilising people and raising consciousness, but also to share those best practices and learn from each other.