Home Story The Politics Of Food 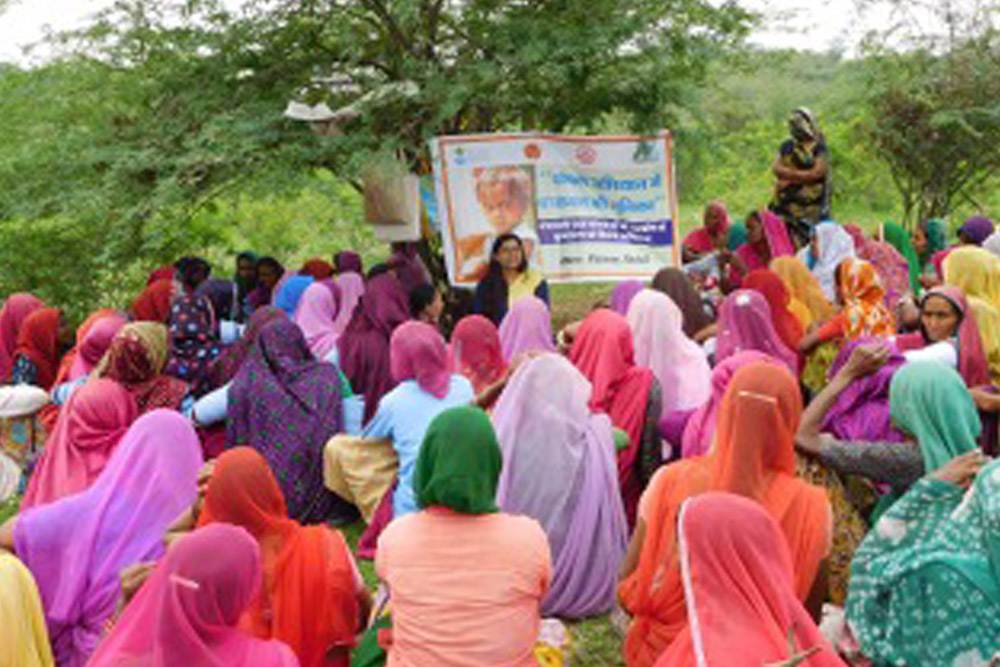 The Politics Of Food

Getting the sarpanch to rally for the nutrition needs of a village may be the perfect way to push for reforms, but it’s not easy. A report from the ground and some takeaways.

Call it a silent emergency. India’s very own. The pattern has changed over seven long decades. A good deal of schemes, policies and programmes have been rolled out. But India has fallen short, always. And the scourge of malnutrition has scored every time. Strikingly, there has not been a single one with a curative purpose to it.

Rajasthan, one of the worst performing states in nutrition matrix, took up one such project. It introduced an innovative plan in 2015: POSHAN (Proactive and Optimum care of children through Social-Household Approach for Nutrition) was carried out at the individual, household and community levels, in the spirit of local self-government. The sarpanch, or the village head, was the lynchpin of the scheme. It was his or her job to rally people to avail treatment against malnourishment. Action Against Hunger India (AAHI), set up in August 2012 to eradicate malnutrition and hunger, also came on board.

It was the 73rd Constitutional Amendment Act of 1992 that had conferred constitutional status to India’s age-old panchayati raj Institutions: to establish a democratic decentralised development process through people’s participation in decision-making, implementation and delivery. To this end, the Constitution provided for the devolution of power and responsibility upon panchayats (village councils) through a three-tier system: the gram panchayat at the village level, the Mandal Parishad or Panchayat Samiti at the tehsil level and the zila parishad at the district level.

Panchayati Raj Institutions (PRI) have historically played an important role in guiding the social, political and economic life of people in rural India, with different stakeholders participating to plan on locally-felt needs, raise revenue and resources locally and implement development projects initiated by the Central and the state governments. Thus, the PRIs became a cornerstone in the strategy of balanced regional development with broader participation of common people in engendering greater transparency and accountability in governance. Under the National Nutrition Strategy, 2017, it is imperative for Kuposhan Mukt Panchayats (Malnutrition Free Panchayats). Therefore, it is essential for the sarpanch to know how the awareness of managing malnutrition can contribute towards that goal.

Mapping the panchayats
AAHI organised strategic activities with the PRIs. A mapping of “Active Panchayats,” who voluntarily participated in the village-level activities was carried out and a workshop on nutrition was organised in each panchayat, with the sarpanch of the nearby villages were also invited. Within these workshops, the sarpanch were encouraged to speak about their interventions, informed about nutrition and malnutrition, trained in the POSHAN programme and how they fit into their respective roles. One-on-one meetings and exposure visits to POSHAN diwas (days) were organised for all the sarpanch, to showcase how the government programme ran.

To encourage active participation, the press was invited to visit a particular gram panchayat that excelled in the programme. With news reports of success stories appearing in newspapers, the sarpanch dug into the work with great enthusiasm. Some of them, hailed as “Nutrition Champions” for their good work, spoke about the POSHAN programme and malnutrition at the monthly village meetings, monitored the POSHAN Diwas, motivated families to take an active part in bringing their malnourished children to the programme and lend support in spearheading the awareness sessions. To ease their efforts, the pamphlets and documents were distributed in the local language.

-The concept of malnutrition was vague among the sarpanch
-Most believed nutrition was hereditary, linked to poverty
-They ignored the causes as well as the management
-They believed treatment to be costly, hence avoidable
-Many considered malnutrition to be a disease originating from food habits
- The sarpanch of far-flung areas did not attend Block meetings
-They were less aware of government schemes
-Many of them were not aware of the POSHAN programme
-Most had no clue about their roles and responsibilities.

The road ahead
The issue of malnutrition is dependent on multiple factors, which include best practices on infant- and young child-feeding practices, immunisation, institutional delivery and early childhood development, food fortification, deworming, access to safe drinking water and proper sanitation, dietary diversification, and other related factors. Therefore, to address the problem of malnutrition in children, it is imperative to create an enabling environment towards it.

The subjects allotted in the 73rd Amendments to PRIs include those addressing the immediate and underlying determinants of undernutrition: health and sanitation, family welfare, drinking water, women and child development, public distribution system, agriculture, education, poverty alleviation, and social welfare among others. Here the gram sabha should incorporate the agenda of nutrition in monthly meetings, according high importance to those. Each gram panchayat needs to mobilise their gram sabha by setting panchayat-specific nutrition targets, coordinating with the government and the non-government agencies and tap resources from centrally and state-sponsored schemes, so that the services reach the community.

POSHAN Abhiyaan focuses on converting the agenda of improving nutrition into a Jan Andolan (mass movement) through the involvement of PRIs, villages organisations, self-help groups etc to ensure wide public participation. Moreover, it looks to synergies all these efforts by leveraging technology to achieve the desired goals and convert nutrition awareness into mass awareness. The idea of POSHAN Abhiyaan is ultimately a “People’s movement”.

The learning and experiences of Rajasthan need to spread to other states. At the end of the day, elected members of a polity are answerable to the electorate. A positive feedback loop can perpetuate best practices and achieve the ultimate goals of the POSHAN Abhiyaan.

(Abdul Halim is a sociologist, social worker and public health professional with the AAHI
Mousumi Gupta is a social development professional, working as Director-Advocacy with AAHI.)