Home Story The Heady Aroma Of The Ancient Buddha Rice Is Believed To Be A Gift Of The Buddha. After 3,000 Years, Scientists Are Calling It A Treasure Trove Of Nutrition, That Can Put The Basmati To Shame 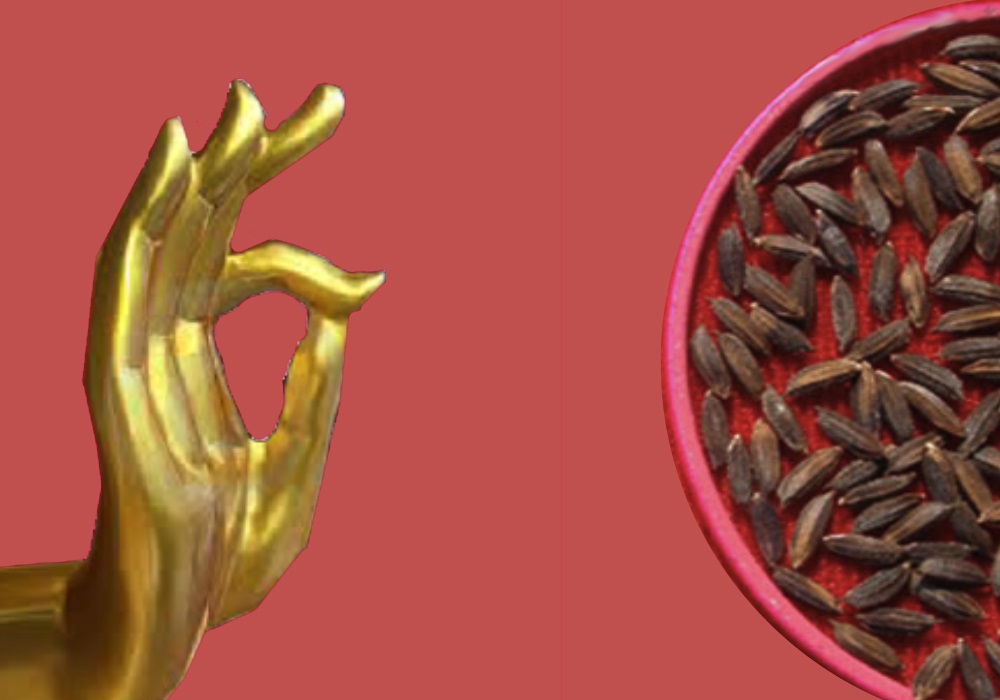 The Heady Aroma Of The Ancient Buddha Rice Is Believed To Be A Gift Of The Buddha. After 3,000 Years, Scientists Are Calling It A Treasure Trove Of Nutrition, That Can Put The Basmati To Shame

The story goes back to the Buddha. He was on his way to Kapilavastu after attaining enlightenment. He crossed the Bajha jungle in the Terai region and came to a place called Mathla. Here, the villagers stopped him, asking for blessings. The Buddha took the rice he had taken in alms and gave it to them: a short grain with unusual black husk. “Sow it,” he said. “It will have a special aroma. And that will always remind people of me.”

It is not easy tracing history's footsteps. Nearly 3,000 years later, the Bajha jungle has disappeared. There is a Bajha village somewhere in southern Nepal near Kapilavastu district. Instead of Mathla, there is a Mudila village in the Siddharth Nagar district of Uttar Pradesh—considered to be the heart of ancient Kapilavastu. But the rice continues to be sown in a handful of villages, in the Terai region. Colloquially the “kalanamak” for its black-salty husk, it is the hidden “black pearl” of Uttar Pradesh.

With Buddhism having a revival across the world, the ancient grain has regained its legend as the “Buddha rice.” Soft and fluffy yet firm and dry, when cooked. The grain also grows in length—a measure of quality in the international market—40 per cent more than the basmati grain. And its aroma, believed to be the gift of the Buddha, can put the basmati to shame. What’s more, it loses its aroma and quality if grown anywhere else. It has been awarded the Geographical Indication (GI) by the Govt. of India in 2013.

The Buddha rice is just one more of the several thousand neglected and forgotten riches—native crops, grains, seeds and fruits—that have fed Indians for millennia, but have gone largely without scientific or development attention. Many are lost forever, but some—like the Buddha rice—have been beloved companions for thousands of years in remote rural pockets. Their latent potential lies unexplored, even as millions suffer chronic hunger and malnutrition across the country. Hence, on Bodhi Day, let’s celebrate the Buddha rice, as yet another example of the nutritional wealth inherent in the full array of our indigenous platter.

Why is the Buddha rice such a treasure to cherish? One of the rare researchers on the Buddha rice, professor U.S. Singh of the Gobind Ballav Pant University of Agriculture and Technology (GBPUAT),Uttaranchal, explains how the Buddha rice outclasses the Dehradun basmati, and not just in aroma. Compare the two on nutrition content: for every 100 g of the Buddha rice you get about 390 kcal of energy (for basmati it is 130). Every 100 g of Buddha rice provides over nine per cent protein (2.4 g for basmati), nearly 90 per cent carbohydrates, about 2 per cent of dietary fibre, rich supply of iron, zinc, copper and magnesium, zero sugar and fat. It is much more resistant to rice diseases, bacterial blight and droughts. Water requirement is quite low, as compared to basmati. With it all, the cost of cultivating this rice—including seed, fertiliser, manure, pesticides, power for land preparation, irrigation—is exactly half that of basmati, shows Singh.

At a time the global scented-rice market is growing at a fast double-digit clip, India seems to have very few aromatic varieties to offer, beyond basmati. Thanks to the undue importance given to basmati after the onset of the Green Revolution from the 1960s, over 300 non-basmati scented rice varieties in India are now on the verge of extinction. According to GBPUAT researchers, the Uttar Pradesh region has already lost the germ-plasm of 20 non-basmati scented varieties already. Just eight such varieties still remain, thanks to scientist-farmer participation. The most prominent variety is kalanamak or the Buddha rice.

It is said that the Buddha attained enlightenment in 596 BC. On the eighth day of the 12th lunar month, the story goes, he awoke from deep meditation, looked up and saw the morning star. That was the singular moment of revelation. Buddhists celebrate the Bodhi Day between December and January: from December 8 in Japan to early January in China and India. With the sacred season taking off, why not spend some time browsing, researching and collecting information on this very special rice grain?