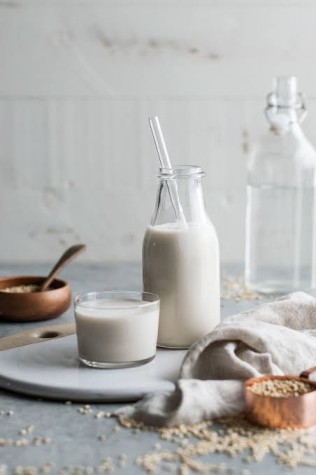 Milk has been long heralded as an essential food in India; its ubiquity in people’s diets bear testimony to this. But as the demand for dairy grows, so does its impact. In addition to the animal welfare issues involved, the unprecedented volume of breeding and raising of millions of cows and buffalo brings significant consequences for the health of our environment, both locally and in respect to global climate change.

The situation has opened a pathway for discussion of plant-based milks as a more sustainable and humane alternative.

India accounts for the world’s largest population of cattle and buffalo raised for milk and meat, with an estimated 98 million for dairy and 20 million for meat as reported by the Food and Agriculture Organization, with some estimates much higher. While these numbers may seem a laudatory achievement for India’s milk production capabilities, they raise a substantial challenge with regard to climate change.

A study conducted by the Indian Institute of Technology Delhi, Jawaharlal Nehru University and the Deenbandhu Chhotu Ram University of Science and Technology, Murthal, warned that methane emissions from India’s livestock will have significant implications for climate change. India’s livestock emitted 15.3 million tonnes of methane in 2012.

Methane’s global warming potential is 21 times higher than carbon dioxide – which means that it traps a much higher amount of heat in the earth’s atmosphere, albeit for a shorter duration.

Consumption of milk varies greatly across rural and urban areas of India. A study analysing consumption trends of milk conducted in 2014 showed that the ‘rich’ population in India consumed almost seven times the amount of milk consumed by the ‘very poor’. This disparity is reflected in the overall ecological footprint across different economic backgrounds.

Thus, urban populations with higher disposable income and better access to plant-based dairy alternatives – which are made from plant ingredients like nuts, grains and pulses and processed to mimic the sensory experience of conventional dairy, can, and will help slow the pace of the “climate clock”.

Research investigating the environmental impact of plant-based milk alternatives is nascent, but the data available indicates lower climate impact per unit weight of product for plant-based milk as we can avoid emissions from animals, feed production and manure. This offers further environmental benefits, such as reducing soil acidity and preventing an overabundance of nutrients in water bodies.

Consumer research tracking food trends are also indicative of the varied factors influencing food decisions among the urban middle-class Indian, and among them, conscious consumerism is a recurring theme.

Consumers are recognizing the urgency of climate change and want to see more transparency in food supply chains. They are also prioritizing health in their food decisions, and are showing more openness to new food options.

According to a study conducted to understand the lifestyle trends and changing food habits of Indian consumers, 80% of consumers want companies to increase attempts to provide more healthier options and 78% think that companies should increase their efforts to provide clarity and transparency concerning their products. All of this points to an increasing level of interest and demand for plant-based alternatives. This is further evidenced by the success of the plant-based milk sector in the country.

Plant-based milks are a subject of rising popularity and innovation globally. Such products deliver similar sensory experiences, allowing consumers to accept and transition to them more easily. Technological innovation, along with increased investments and partnerships, are also helping to scale-up availability and accessibility of plant-based dairy.

The landscape for plant-based dairy is just populated by start-ups but also mainstream companies responding to consumer demand and finding innovative ways to deliver more of what consumers want and in an expeditious way.

For example, in 2020, Nestle inaugurated an Research & Development accelerator with the objective of bringing plant-based dairy to market quickly. Concentrated research efforts are underway to make plant-based dairy suited to the taste & nutrition needs of the consumers on the functional beverage segment- for example, fermentation-based innovation offers a lot of potential for improving the nutritional content, stability, and taste profile of plant-based drinks.

Popular international brands like Oatly have entered the Indian market and are expanding the plant-based menu for consumers by offering plant-based dairy beverages in several cafe chains across the country.

Starbucks was one of the early-adopters of plant-based milk menus in India with almond and soy milk being available since its inception. The coffee company recently added oat milk beverages to its menus.

Today as we mark World Milk Day we are also in need of further dialogues around sustainability and consumption patterns for milk and other animal products. It is imperative that we move to adopt food options that can help us secure a more sustainable, healthier future. We can start by supporting the emergent market in plant-based milks.