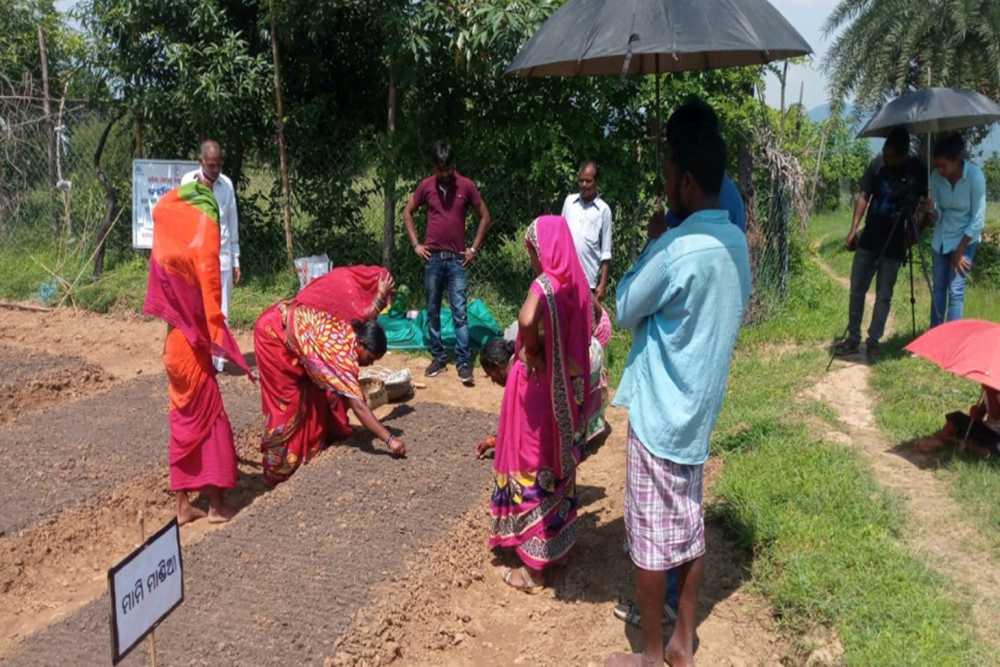 Odisha Millets Mission (OMM) is negotiating with women collectives of the state to replicate mobile teaching kitchen model to impart nutrition education. The response is encouraging…

The problem of malnutrition in Odisha is complex, and therefore, requires a multidimensional approach. Various central and state-run schemes are striving to address nutrition issues among sizeable vulnerable population. Odisha Millets Mission (OMM), a government of Odisha intervention, is striving to do this by linking nutritional goals and challenges to agricultural intervention.

As women in Odisha play a significant role in agricultural activities, tapping their collective potential is emerging as a strategic move. The role of women in agriculture stretches right from bringing the crops from farm to the hearth, and subsequently, serve it to the household in plate. Also, as an outcome of SHG movement, women collectives are emerging as powerful micro enterprises. This holds potential not only for improving market linkages but also initiating meaningful reform in addressing nutrition issue. OMM is doing just that.

The OMM has been negotiating with women collectives of the state to replicate mobile teaching kitchen model to impart nutrition education as part of millets promotion efforts. One such effort initiated by the Nabakrushna Choudhary Centre for Development Studies (NCDS), the State Secretariat, and OMM was a day-long workshop where NNEdPro Global Centre for Nutrition and Health team was invited to share their knowledge base. The response was overwhelming.

NNEdPro aims to shape future through education, awareness campaign, capacity building and collaboration with the objective to target malnutrition through mobile teaching kitchen. Their objective is in keeping with the efforts of TIGR2ESS, Cambridge Global Food Security, Flagship Prograame 6, which emphasizes the impact on community participation to enhance health and nutrition.

Trishakti SHG Federation has been associated with OMM since 2018 and has been trained by the Programme Secretariat on healthy millet recipes. Armed with the training from Mission Shakti, they have proved themselves as effective micro-enterprises, showcasing their products at state events like World Cup Hockey 2018, Adibasi Mela, Krishi Mela, Mission Shakti Mela.

Bringing visibility to millets as a healthy food option, 120 TA Btn AWWA women collectives run a bakery (Kalinga Bakery) within the campus premise in Bhubaneswar. The women entrepreneurs have been trained by OMM to bake products using millets as a healthier option to maida and wheat. Backed with necessary guidance, both the groups are ready to launch their own projects.

The workshop, held at 120 Territorial Army Btn premise, saw many of the eminent participants agreeing to provide handholding support to women’s groups in their own personal capacity.

The facilitators shared the tools, methodology, background and process of their action project in Kolkota. Prof. Sumantra Ray revealed how the ‘see one, do one, teach one philosophy’ followed by their team is seeing replication in other states like Punjab with good results. He felt micro level projects can bring about reform in the psyche of a society. Chitra Ray shared her role as a consistent hand holder as part of inner wheel club member while her colleague Sudeshna shared templates of balanced diets and explained the requirement of nutrition in growth and development of human beings. Sudeshna also highlighted that in keeping with objectives of OMM, they have introduced one millet recipe in their template, though for Kolkota residents millets is a new cereal. The fact that it is gradually but effectively getting approval spoke of the success of their efforts.

Millets are coming to be recognized as a health food across the country. A live demonstration of one of the templates was given in front of the participants emphasizing the nutrition value of each ingredient and hygienic cooking practices.

Appreciating collaboration with other line departments, especially with Armed forces organization, Prof. Srijit Mishra, Director, NCDS, stated that breaking the silo and crossing the gated communities is essential if we are truly engaged in imparting nutrition education. Such efforts need to be enhanced consistently.’

Col DD Swain, CO, 120 TA Btn, felt the workshop was in line with efforts to impart vocational training to wives of army personnel and an important move to make them self-reliant.

Encouraged by the workshop, Smita Swain, the lead lady of AWWA, stated that she was hopeful of being able to push ahead with their programme of plying food trucks in the state capital and empowering women with nutrition education’. Namita Singhdeo, member representative, Inner wheel club, Cuttack, revealed plans of initiating such projects in the neighbouring city.

Dietitians from AIIMS, Bhubaneswar, have already started contemplating introduction of millet recipes in the diet charts of their patients. “We would be needing supplies and now we know whom to reach out to,” Mamta Tiwari, AIIMS, confirmed, and adding that such initiatives would help spread nutrition education.

(A follow up report by the writer who is Post Doctoral Fellow, Nabakrushna Choudhary Centre for Development Studies (NCDS), Bhubaneswar. For earlier report link see: http://poshan.outlookindia.com/story/poshan-news-can-a-mobile-teaching-kitchen-target-malnutrition/338506)