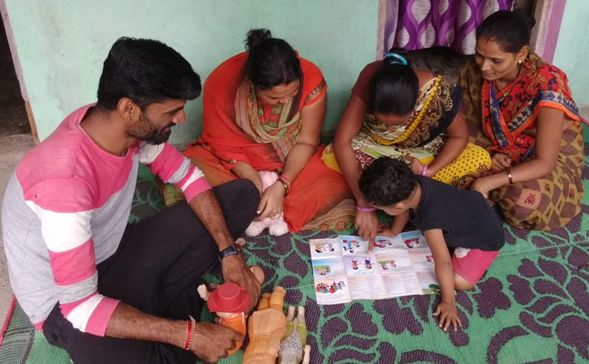 Pooja had no breast milk for her newborn girl, Trisha, and gave her cow’s milk and biscuits instead. Until some front line workers turned up and brought the smiles back in her family.

Educated up to the 10th standard, Pooja is a housewife living in the Vai village of Digras taluka in the Yavatmal district. She stays with her in-laws and her husband and her daughter Trisha. Her husband has studied till higher secondary and does farming for livelihood and income generation.

When Trisha was born, “It seemed like I had no breast milk and I would never be able to feed my baby. I gave up after trying a lot of things and started giving cow milk to Trisha”, says Pooja with slight hesitation. “As Trisha grew up, she took only milk and biscuits and nothing else. She would often become irritable and demand attention from other family members to give her the very same stuff to eat. So I kept giving her mostly milk and biscuits,” she adds

One day, ASHA and Anganwadi workers visited her home to explain how she should interact with her baby, speak to her, and when and what to feed her. Pooja replied, "But Trisha is 15 months old and has no taste of anything but milk and cookies, so you're suggesting that I should feed her everything. What I must do to ensure that she eats other nutritious things too?”

The frontline workers then " told me very clearly how I can increase her appetite," Pooja continues, "also, how to be patient with her if she doesn't sleep, to feed her at will, to play with her, etc. And since then, I've been feeding her fruits, loaves of bread, cucumber, and beans, and we've all begun to play and spend time with her as ASHA told us.”

Initially, Trisha couldn't take most of the meal we were giving, but the family members didn't give up. Every family member used to give her something to eat slowly to help her crave something other than milk. "It was wonderfully fulfilling to see it happen," says Pooja with a twinkle in her eyes.

"Earlier," she restarts after a pause, "The Anganwadi worker used to tell us when to feed the infant, but nothing on how to feed the kid. Also, since it used to be in Marathi, I couldn't comprehend any of it. So this time, the ASHA and Anganwadi worker asked me all these questions in my mother tongue, Banjara. Now they give us new, fascinating knowledge every time they visit our house.” 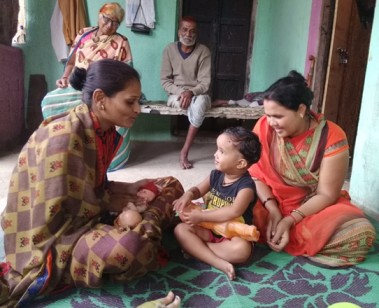 Asked how she finds the Anganwadi meetings, she states, "The ASHA and the Anganwadi staff describe everything to us in the local dialect. I decided to follow at home what we were taught at the meeting about what the child should and should not be given, how it would benefit her, how to monitor her growth. As a consequence, my daughter's food patterns have really improved for good. She seems more cheerful than ever.”

Trisha's friendship with other family members has lately become a pleasure to truly enjoy. "She likes to play a lot with her aunt and grandparents. She's even actually attempting to mimic them. It has eased me, too, as many members are taking part in her development" says Pooja, visibly relieved.

“Now you can see Trisha asking items to eat because she's trying to feed herself. She's even gained a decent weight over the past few weeks. If I had been ignorant of all the helpful things my daughter wanted, I don't think she could ever grow the way she did. It's so nice to see her like this," she concludes with a happy smile.