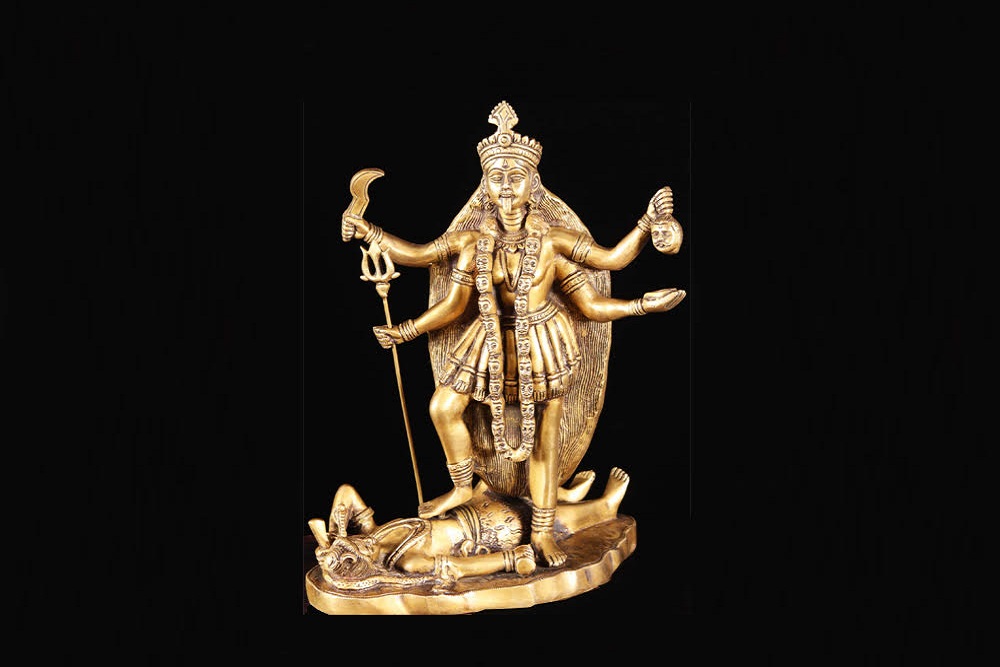 In a country where gods are always celebrated with food, what nutrition message does the most powerful goddess send out on Diwali?

She is the force of time and of the cosmos: naked, dark as the night, bedecked with severed arms and freshly-cut heads, tongue lolling with blood. She is Kali, the fierce, ferocious and frightening goddess of ultimate power, over adversity, and evil. And today is her day.

In a country where gods are always celebrated and associated with food, each with distinct preferences, what nutritional message does the most powerful goddess of India send out? That’s the million dollar question for Outlook Poshan. What food does Kali prefer? How has her iconography, cult and mythology influenced Indian diet habits?

Non-vegetarian. Or is she?

At Kalighat in Kolkata, right after noon, devotees are barred. Teams of cooks from the temple kitchen trot out with enormous brass platters in hand, loaded with rice, dal, vegetable fries and tarkari, deep-fried fish head, fish curry, chutney and kheer or payas. They cry, “Jai Ma!,” ring conch shells and bells, as they approach her inner sanctum. The doors are shut for a time,
allowing the goddess to eat in silence.

The point is: the everyday fare of the goddess is essentially the normal Bengali food. Not just, as Tupur Banerjee, assistant professor of history, University of Burdwan, writes, the goddess
prefers inexpensive fish (like boal, magur, sol) and vegetables (kachur shaak and lau ghanta cooked with the head of rohu fish). On special occasions, animal sacrifices (primarily, goats) occur in the temple, with mutton curry added to her fare. There are many butcher shops in Kolkata that keep a picture of Kali and people buy meat from them with the thought that they would be eating food offered to her.

Surprisingly, for long, on Kali Puja day most homes in Bengal, Odisha and Assam were strictly vegetarian, with women observing fast. In the words of Srila Prabhupada, the founder-preceptor of the ISKCON movement, “Goddess Kali never accepts nonvegetarian food because she is the chaste wife of Lord Siva. Lord Siva is also a great Vaishnava and never eats nonvegetarian food, and the goddess Kali accepts the remnants of food left by Lord Siva. Therefore there is no possibility of her eating flesh or fish.”
The living tradition, however, is that Kali Puja day is a normal non-vegetarian day—perhaps, with some culinary delicacies thrown in.
That’s in keeping with the changing food habits of Indians: an analysis of the national health data by IndiaSpend and FactChecker in 2018 revealed that 80 per cent Indian men and 70 per cent women take non-vegetarian food. Most vegetarians in the country live in a few northern states, while the southern and northeastern states are predominantly non-vegetarian, with people consuming different types of meat, fish, and eggs.

It is said, rice that has been partially boiled in the husk (Shiddha Chal in Bengal) is her favourite, writes Mausumi Banerjee Saha of Calcutta University, who has researched the idea of “prasad” extensively. This rice is easy to cook, less sticky, richer in B vitamins, thiamine, niacin, calcium, potassium, fibres and protein, compared to regular white rice. This kind of rice also has more antioxidant properties, that protect against cellular damage. Parboiled rice promotes the formation of beneficial bacteria, called probiotics, hence good gut health. It is believed that parboiled rice does not raise blood sugar as much as other types of rice, including brown rice.

Ragi, the red millet, is considered to be the favourite food of the goddess down South. In Tamil Nadu, Ragi Koozhu, or porridge balls made of ragi, is a staple “prasadham” in many Mariamman temples (Mariamman is considered to be an incarnation of Kali.) And Koozhu, also called Keppai Kali or simply Kali, is a poor man’s food: inexpensive, nutritious, cooling, rich with iron, vitamin B, protein amino acids, phosphorus, magnesium and potassium. It lowers blood pressure and asthma, repairs skin problems, helps in muscle and bone growth and served especially to young children and the elderly. A staple diet in farming communities, no festival of the goddess is complete without women making ragi porridge in the temples and distributing those to the poor.

Does she drink alcohol?

Alcohol, or karan bari, is integral to many of the Dashamahavidya, the 10 forms of Shakti in Hinduism. Alcohol in Kali Puja is one the Panchamakara items followed, according to Tantric
traditions. It is not offered to her, but a finger of the goddess is dipped into it, to symbolically transform it into “amrita,” before her worshippers drink it.

But then, there are other scriptures, say Shiva Purana, that mention her drinking: “Going to the battle ground, the goddess Kali roared like a lion. On hearing that the Danavas fainted. She laughed boisterously again and again. She drank the distilled grape wine and danced on the battle ground.”

It’s immaterial if Kali drank or not. As Babasaheb Ambedkar wrote in Riddles in Hinduism, “The Vedic Gods drank wine. The divine wine was called Soma. Since the Gods of the Aryans drank wine the Aryans had no scruples in the matter of drinking. Indeed, to drink was a part of an Aryan’s religious duty.”

It may not be a religious duty to drink alcohol anymore, but Indians are drinking for pleasure, like never before. India’s annual alcohol intake has increased by 38 per cent between 2010 and 2017, reports The Lancet (May 2019). About 30 per cent Indians drink regularly, with the average urban Indian consuming 4.3 litres a year, and their rural counterpart 11.4 litres a year—way above the international standard.

Did you know that Kali is just another aspect of Kamala, the goddess of inner and outer wealth? Both are among the ten goddesses of wisdom on the Hindu Dashamahavidya pantheon. Both represent aspects of the ultimate divine feminine—the Adi Parashakti. No wonder, Deepavali is the day to worship both.