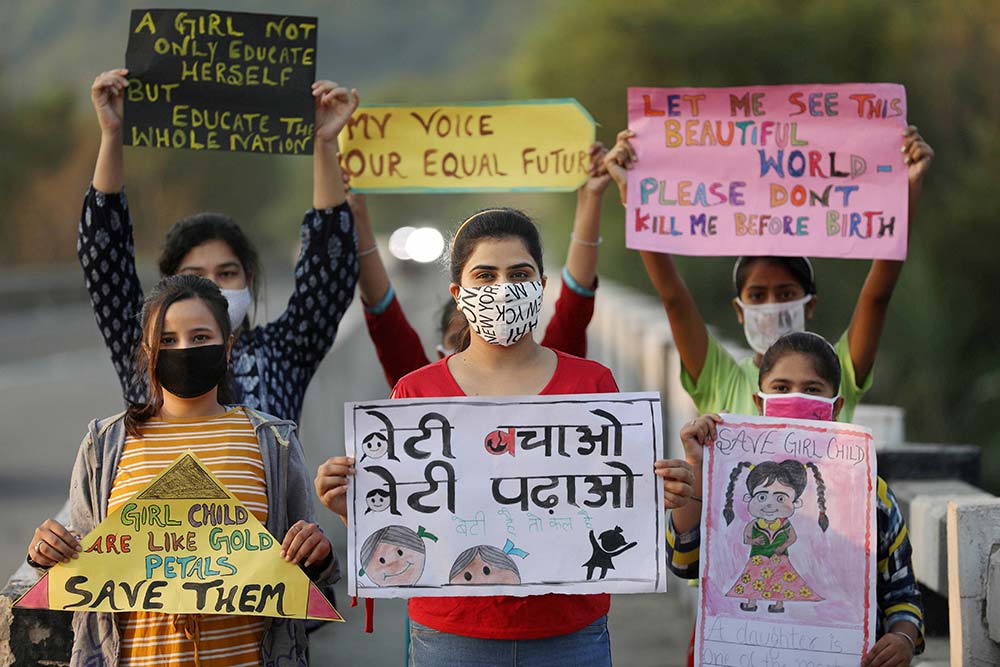 Gender Inequality denies Indian women reproductive choices, which is linked to maternal and children’s mortality and health and nutrition outcomes.

The theme of International Women’s Day 2021 is Choose to Challenge. This theme urges us all to take action for equality by raising awareness against bias to build a gender-equal world. The health sub-theme for this year recognises a women’s health as her capital and encourages women to be empowered enough to make informed reproductive decisions. In this piece, I strive to raise awareness about the lack of control that women in India face over their choice of contraceptive use.

India’s family planning strategies have been successful at stabilising the population growth rate and bringing the total fertility rate (TFR; the average number of live births by a woman during her reproductive age) to 2.2 according to NHFS-4 (2015-16)). This matches India’s population replacement fertility rate – 2.1, i.e. India would seamlessly replace one generation with another. However, the desired fertility rate (DFR; average number of live births desired by a woman during her reproductive age) is 1.8 - significantly below actual TFR (2.2). This implies there is a discrepancy between the actual and desired use of contraceptives in India. In recognition of this disconnect, I concentrate on one indicator of women’s reproductive health and an important determinant of this discrepancy: unmet need for contraception (UNC) or family planning.

UNC refers to the percentage of women who are not using contraception despite wanting to avoid or postpone childbearing. I illustrate this definition. For any population, the sub-section of (married or unmarried) women who belong to the reproductive age of 15-49 years are said to have a demand for contraception if they explicitly state that they do not wish to get pregnant. Among these, some practice contraception and some don’t. The former are the ones whose needs for contraception are met and the latter are considered having UNC.

According to NFHS-4 (2015-16), 48% of the currently married women use modern contraceptives. Among these, female sterilisation accounts for 75% (highest) contraception uptake. Family planning is viewed solely as women’s responsibility and this explains the limited uptake of male-oriented contraceptive strategies. The uptake of condoms and male sterilisation was only 12% and 0.63% in India, respectively (as per NFHS-4). This trend can partly explain the unabating rise of abortions, as a proxy for contraception. A study estimated that 15.6 million abortions occurred in India during 2015. These abortions and their subsequent adverse consequences to women’s health could have been avoided had the needs for contraception been met. Estimates suggest that just fulfilling the UNC and lowering unwanted as well as untimed pregnancies could reduce worldwide maternal deaths by one-third. Further, disruptions in access to health services and extended lockdowns during the pandemic have extenuated the UNC.

In the context of these figures and trends, it is important to look at the factors that contribute to the issue of UNC in India.

The literature informs us that the most common cause of UNC needs is gender inequality that strengthens regressive social norms. For women, their partner’s disapproval (whether explicitly stated or perceived) has been established as the most important predictor for UNC. Gender inequality perpetuates asymmetric power dynamics between a couple and disempowers women to exercise their right to adequate reproductive health (such as seeking contraceptives).

Gender inequality within a country is measured through the gender inequality index (GII). GII is a composite index that represents the inequality in achievement between women and men using the following dimensions: (1) reproductive health, (2) empowerment and (3) labour market participation. The reproductive health dimension includes maternal mortality ratio (MMR) (i.e. the number of maternal deaths per 100,000 live births) and adolescent fertility rate (AFR; the number of births to women aged 15-19 years per 1,000 women). Low MMR captures adequate access to women’s healthcare needs and is often regarded as an indicator of women’s status in the country. Similarly, a low AFR implies that women delay childbirth beyond their teenage years resulting in lower health risks for mothers and babies. The second component, empowerment, consists of the parliamentary seats held by the women and secondary education or beyond attainment by the women. Being a part of the local government as well as higher education enables women to raise questions, have easier access to information and also self-advocate in the policy space. The labour market dimension includes women’s participation in the workforce and is inclusive of paid and unpaid work as well as actively seeking work. The GII index ranges from 0 to 1: 0 representing no gender inequality and 1 being highly gendered unequal. It is an indicator of the loss of achievement that the country experiences due to gender inequality.

To estimate the relationship between unmet needs for family planning and gender inequality across countries, I use the data from the United Nation’s Human Development Report 2020. 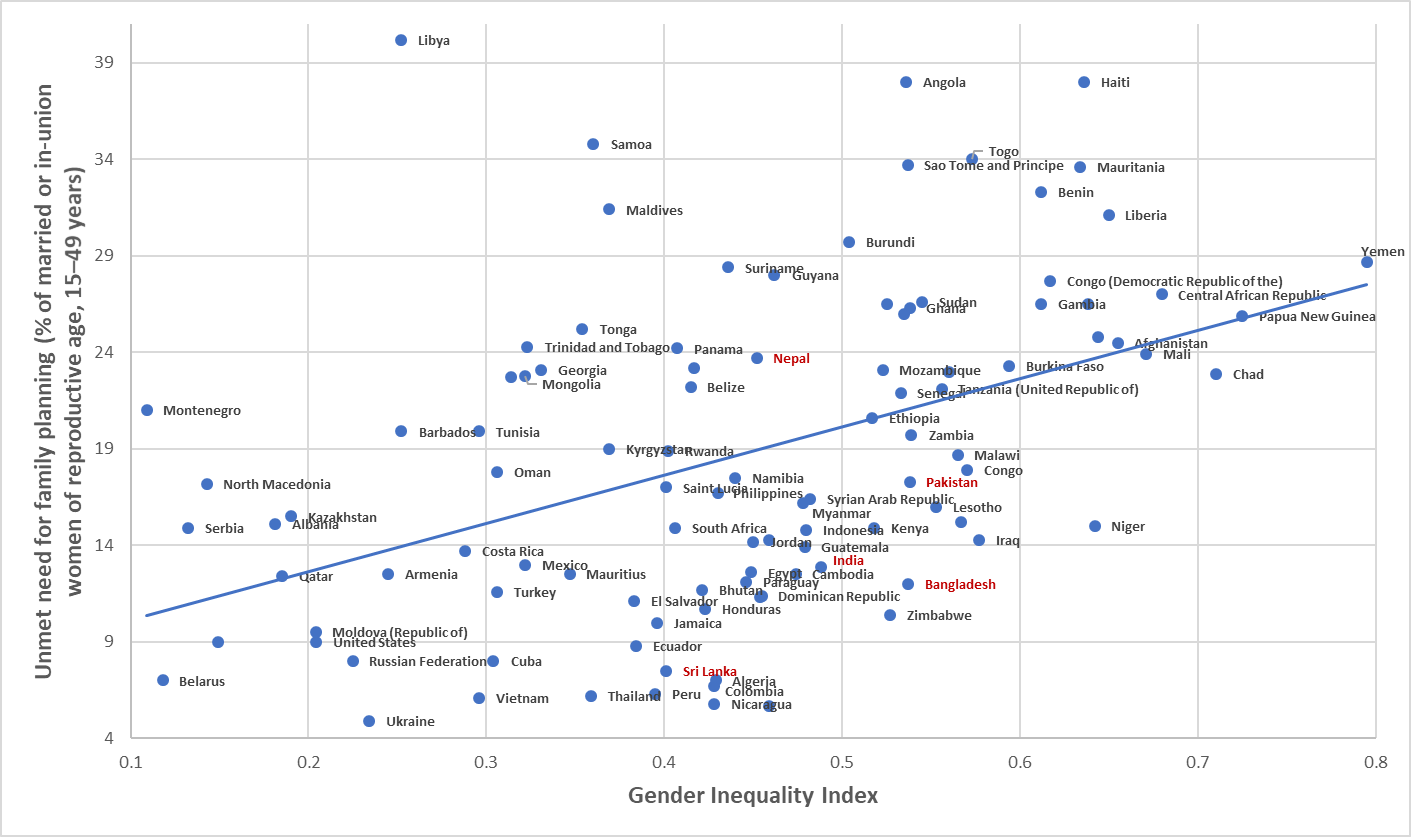 Figure: A scatter plot of countries based on the percentage of women with unmet need for contraception or family planning and their Gender Inequality Index (GII). The blue line is the fit along the scatter plot.

This chart shows that there is a strong positive correlation across countries between the gender inequality index and UNC. This chart reinforces our understanding that gender inequalities within a nation can lead to higher UNC among women. For instance, a lower GII depicts the extent of opportunities and freedom that women have in a nation. This in turn implies that there is higher interaction with community members, enhanced transmission of knowledge regarding contraception, and the ability to exercise the right to choose their preferred method. Lower GII also determines the women’s access to and control over household resources, allowing them to act in their best interest. Women's status and the ease of access to contraception choices in the household are linked with better maternal and children’s mortality and health outcomes.

India ranks 123 among 162 countries in the gender inequality index (0.49) and around 13% of the women face unmet needs for contraception. Compared to neighbouring countries like Pakistan and Nepal, India fares well in terms of unmet needs. On the other hand, Sri Lanka has significantly lower unmet needs but at the same time, it also has a lower GII than India. It is important to note that Bangladesh, despite exhibiting worse gender inequality than India, has lower the unmet for family planning. In lieu of this startling fact, an important question emerges, how did Bangladesh achieve this and what policy lessons can India emulate?

Bangladesh’s family planning program is designed to encourage regular and frequent visits by female family planning health workers. The awareness campaigns are targeted towards the couple and not just the woman. For instance, an experimental study reported that sustained adoption rates for contraception were higher among men who were given counselling in the intervention villages than men who were not given any counselling in rural Bangladesh. These health workers were instrumental in breaking the informational, cultural and psychological barriers about contraceptive use. Inter-spousal communication seems to be the key to lowering the unmet needs for contraception in Bangladesh.

Similar interventions can be designed to create an enabling environment for women to act on their fertility decisions in India. Along these lines, an exceptional intervention has been undertaken in India: Main Kuch Bhi Kar Sakti Hoon (I, A Woman, Can Achieve Anything). As an edutainment series, broadcast on national television, it informs the audience about the importance of reproductive health and fostering partner engagement in taking a mutual decision towards contraception. Such interventions will go a long way in changing people’s perceptions that contraception is solely a woman’s responsibility. Finally, rigorous qualitative research and male-oriented surveys are needed to understand the enduringly stubborn male perspective on the use of contraception.

In the spirit of #ChooseToChallenge and #HeForShe on International Women’s Day 2021, this article challenges the undue burden shouldered by women to seek adequate contraception decisions and calls for higher involvement of men in family planning.

(The author is a consultant at Tata-Cornell Institute, Cornell University USA and a PhD Scholar at Bennett University)