Home Story How Eggs And Women Transformed A Malnutrition-Prone Village 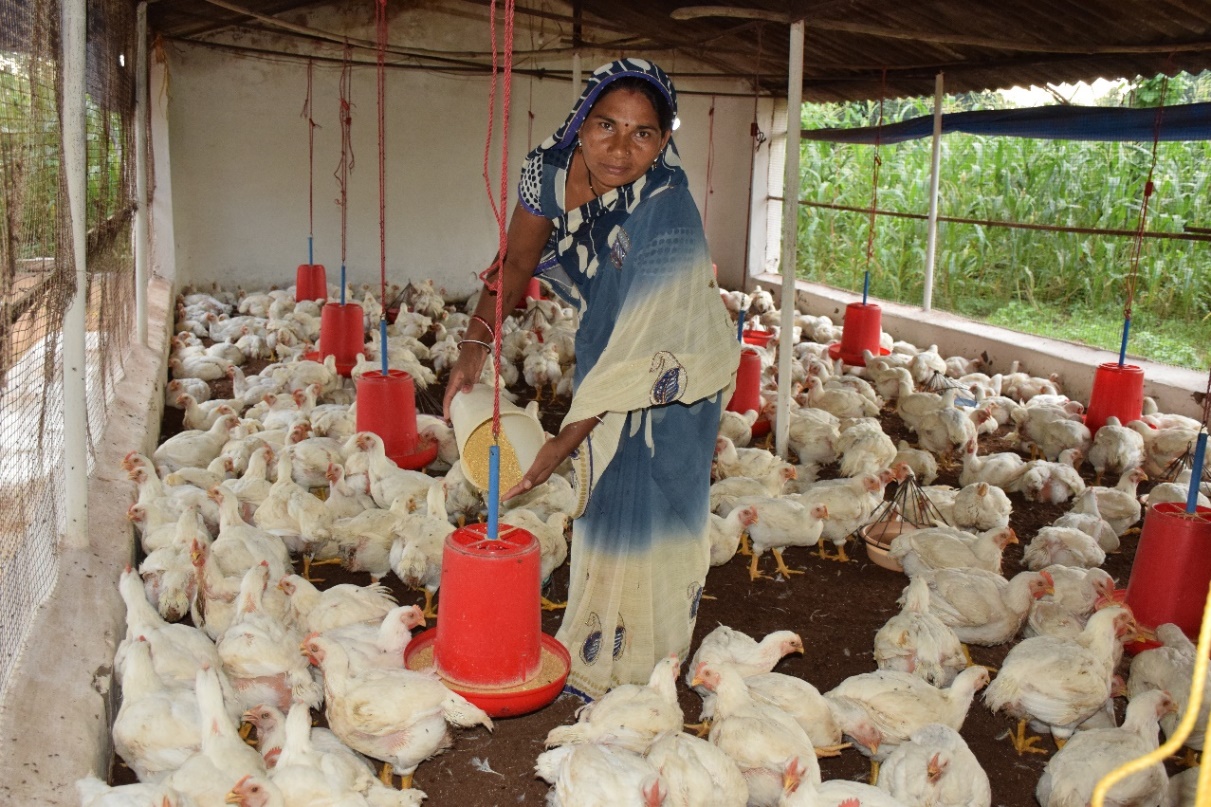 How Eggs And Women Transformed A Malnutrition-Prone Village

Every morning, Kota bai wakes up and walks over to the house she constructed just a year ago. She inspects her flock of 400 chickens carefully – all hale and healthy! It will soon be time for their breakfast – a specially formulated meal with the right mix of nutrients so they can lay healthy and large eggs. All this is thanks to the Madhya Pradesh Women Poultry Producers' Company Limited (MPWPCL). MPWPCL is an all women owned and managed farmer co-operative that promotes smallholder poultry women farmers by aggregating them in clusters working on market principles and generates wealth for their socio-economic upliftment. Over the last five years, this has led to a consistent increase in farmers' income like Kota bai while simultaneously improving the availability and affordability of eggs in rural India.

Even five years ago, Kota Bai’s village and its surroundings were far removed from today’s reality. The remote tribal communities of Anuppur in Madhya Pradesh consumed primarily rice, occasionally complemented with edible plants foraged from the surrounding forests. This resulted in chronic nutrition deficiencies of its population. Initiatives like MPWPCL have contributed significantly towards the reduction of malnutrition in the area by improving the availability and affordability of nutritious foods such as eggs and increasing incomes of smallholder farmers such as Kota bai.

Eggs are a powerhouse of nutrition, can be cooked in many ways, eaten at any time of the day, in any meal, and liked by both children and adults. Several recent studies have evidenced the positive impact of egg consumption on children's health and growth. Further, it’s possible to boost its nutrient profile through the feed. For example – a baby’s daily requirement for vitamin D can be obtained from one enriched egg. Despite their apparent benefits, availability in rural India is extremely low- only 2 eggs per person in a month compared to 13 in urban India. This huge gap is due to the concentration of eggs in a few South Indian states, and within them, eggs are produced and consumed in urban and semi-urban areas. If business continues as usual, egg availability in rural areas will, in fact, reduce to 1 egg per annum by the year 2030. 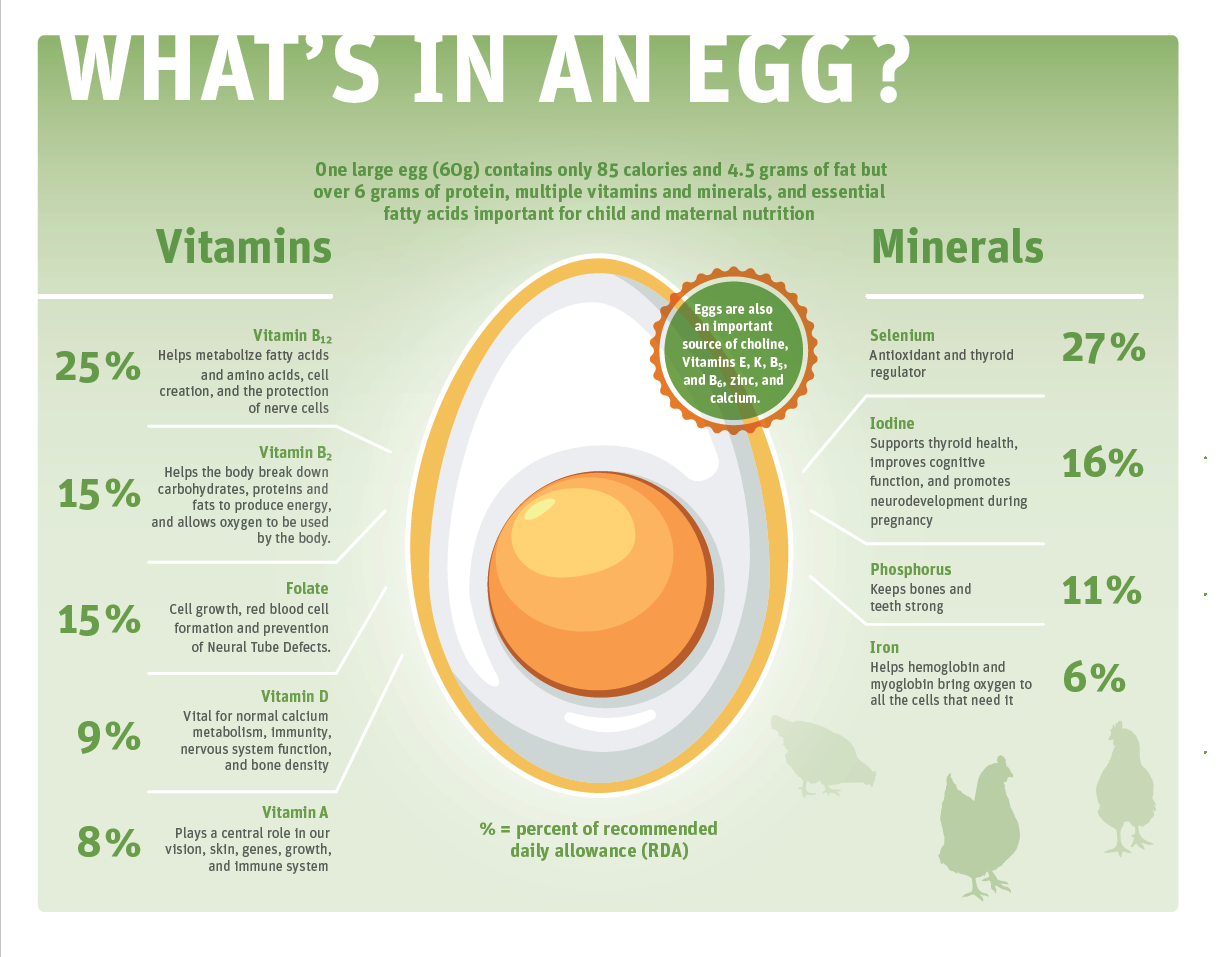 The high cost of transportation, inconsistent access to farm inputs, and market support are some of the challenges due to which eggs are neither produced nor distributed in rural India. This has resulted in the high price (30-50% higher than urban areas) and low availability in rural areas. Cultural beliefs and taboos also undermine egg consumption. For example, in some Indian communities, eating eggs is associated with heat in the body and miscarriage of the fetus.

Recognizing the opportunity to improve egg production and consumption in tribal districts of Madhya Pradesh, MPWPCL set up its first cooperative society focused on egg production in Anuppur. Women were trained in poultry farming and provided capital to set up farms. All farms are supported with high quality and consistent inputs, feed, and regular supervision. This reinforced good poultry management practices and improved the farms’ operational efficiency.

MPWPCL acts as an apex body integrating the smallholder poultry clusters under its guidance and passes on the benefits of bulk sourcing, technical support, and economies of scale. 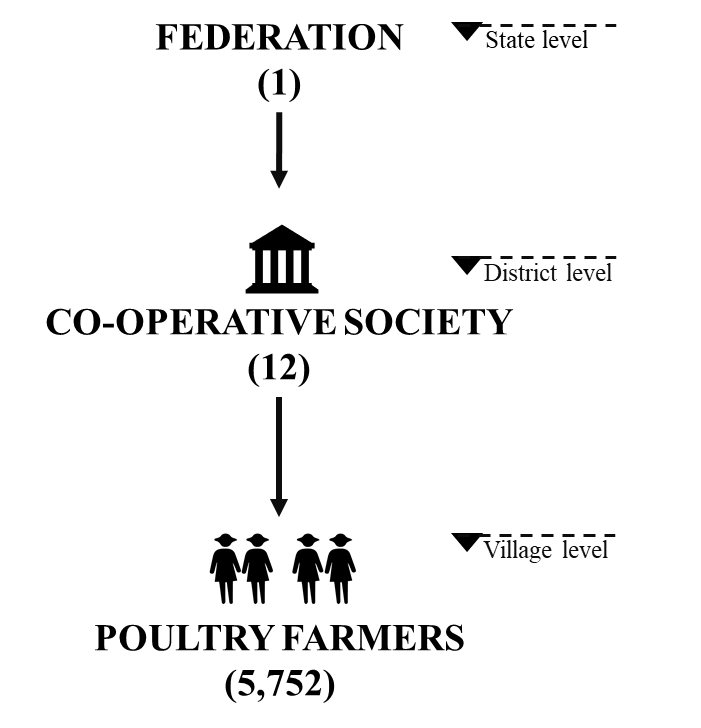 The organizational structure is depicted below.

The layer society (a cooperative society of women farmers raising egg laying poultry birds for the purpose of commercial egg production) in Anuppur was started in 2015. Currently, it has 600 farmer members, with each farmer operating a 400-bird poultry farm. The daily operations of the farms are overseen by a manager, their team of 8-10 salaried employees and 30 village supervisors. One village supervisor covers 20 farmers within a 10 km radius. A village supervisor is a local resident and maintains a close relationship with his farmers by paying daily visits and providing extension services.

The layer cooperative society procures critical inputs such as vaccines, chickens, and feed, which are stored in a central warehouse in the district. The supply of the feed is coordinated among a central supervisor and the village supervisor, which is then distributed to farms.

Eggs produced in the farm are collected at the village warehouse daily between 12 – 2 PM in the presence of the village supervisor. All data regarding egg collection is recorded daily in a diary. Supervisors are paid based on production attained by farmers. By evening the eggs are sent to the central warehouse. Eggs are sold to traders/wholesalers within 1-2 days of collection. 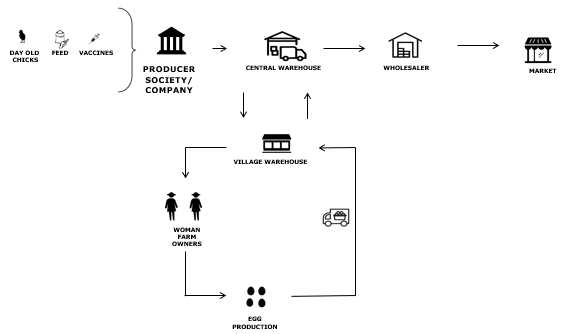 A 340 sq. ft. sized poultry farm has improved socio-economic and nutrition conditions of a household by increasing income eight times. The women can now feed themselves and their children an egg every other day

Performance chart of cooperative in Anuppur.

Gender impact: The woman’s participation in the activity has multiple benefits and impacts, which go beyond mere economic upliftment of the household. They are:

“Poultry farming made me confident and has given me a sense of identity. I don’t need to ask for money from my husband. He also treats me with respect.” – Woman farmer, Anuppur.

Several women like Kota Bai are involved with MPWPCL. Prior to poultry, their families sustained on INR 10-15 a day. They started with a loan from their Self-Help Groups. Within five years, they have built pucca houses and are able to support their children’s higher education. They are also accumulating assets in the form of gold/silver jewelry, thus giving them a sense of empowerment.

The model in Anuppur is a replica of the first poultry cooperative society, which was incorporated in 2001. Since then, 13 such societies have been established under MWPCL. The National Smallholder Poultry Development Trust (NSPDT), a national-level organization dedicated to the expansion of the smallholder poultry sector in India, played an important role in scaling-up the model. Under the aegis of NSPDT, the model has scaled up to 5 Indian states - Madhya Pradesh, Jharkhand, Assam, Odisha, and Maharashtra. The operations in Jharkhand have also emerged as the largest commercial poultry rearing operations in eastern India. At present, these cooperatives have a total membership of 13,954 women farmers constituting 27 farmer companies/society and three state federations. The total turnover of these cooperatives in 2018-19 was INR 520 crore.

The federation achieved break-even in 8 years after its registration in 2006. This supported asset creation and infrastructure development. In addition, MPWPCL also expanded its reach along the value chain by reaching the customers directly. It currently owns six retail outlets named “Sukhtava Chicken,” which are company-owned and company-operated. This strengthened their credit viability. Rabobank, a global leader in food and agriculture financing and sustainability-oriented banking, loaned a term loan of INR 10 crore and a short-term loan of INR 5 crore to further expand its operations.

Models like MPWPCL’s cooperative poultry farming are highly relevant for the poor. Most of the poor in India, and particularly the marginalized communities, have negligible ownership of arable land. A small poultry farm of 340 sq. ft. fetches comfortable income, support livelihoods, and improves nutrition outcomes. Hence, unlike other agriculture-based livelihood initiatives, it does not require significant land assets-base and can be a good source of livelihood for marginalized communities.

MPWPCL is well poised to expand this successful and proven model to serve marginalized communities in other states. It is exploring opportunities to set up a hatching unit, egg processing unit and cold storage, all initiatives that will help reduce costs/increase access, benefits that will be passed onto the communities. By 2030, it aims to double the number of societies, thus empowering 25,000 women like Kota bai pull themselves and their families out of debilitating poverty and malnutrition.

About Sight and Life:

The authors work with Sight and Life, a nutrition think tank that informs, supports, designs, and incubates evidence-based solutions to malnutrition.