A case study from Rajasthan shows how the key to change lies deep within a community and why textbook solutions mostly do not work
Dr Ajith Fredjeev Dinakarlal And Ashish Mukherjee | Oct 31, 2019 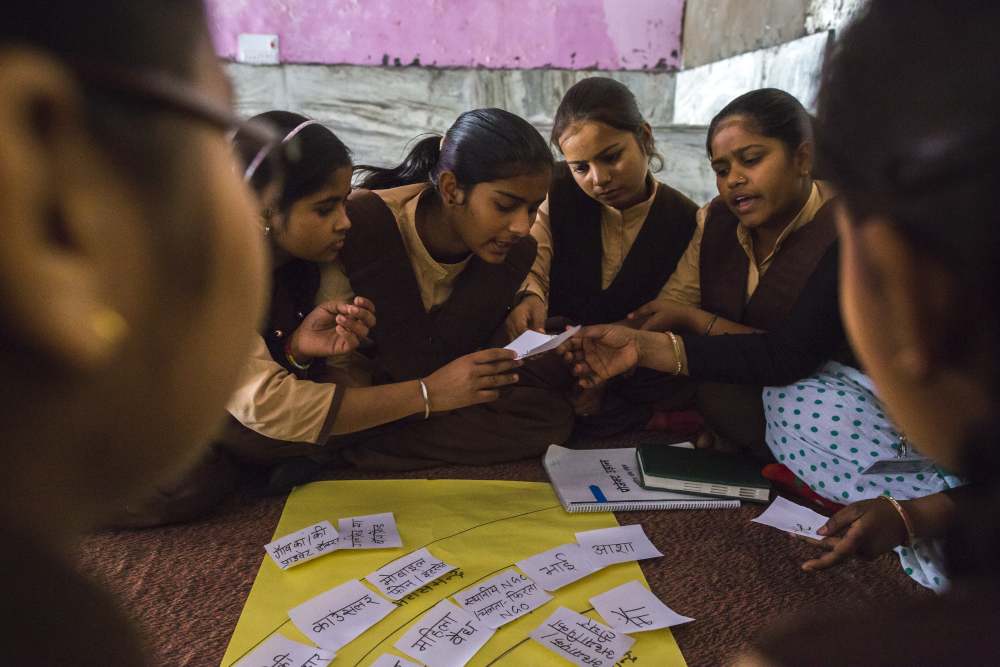 Let us begin with a story, the story of Priyanka, a young girl from Dhaulpur district of Rajasthan, situated in close proximity to Chambal—the place where the (in)famous Bandit Queen Phoolan Devi earlier operated. Predominantly dominated by men, Priyanka was familiar with eating left-overs—if any, after all the men in the family had been fed, being quarantined while using sand and dry leaves to keep herself dry during her periods and to reserve her comments even if she did not agree to anything happening around her - just as every other young girl and woman in her village had learnt too – without even the slightest fuss.

Coming from a ‘primitive’ background that needs no further elaboration to establish that as a fact, she recently started attending sessions on Sexual and Reproductive Health (SRH) organised in her school through Project Udaan, a pilot project launched to prevent adolescent pregnancy in Rajasthan. During the SRH sessions, she, along with her friends began to understand the choices they had in terms of food, nutrition, sanitation, hygiene, contraception, contraceptives and other health practices. This platform where information was disseminated also gave the young boys and girls the space to exchange ideas and clarify doubts, as it opened the ground to dialogue and debate with trainers and peers on issues such as nutrition, reproductive rights and even deeper issues like personal fears and social stigmas that they encountered every day—which would have been considered a taboo to be whispered, nevertheless discussed, in their community otherwise. As part of these discussions, they even got to visit Health Centres and Counselling Centres where the doctors and counsellors clarified their doubts on health and nutrition and enlightened them with their inputs. With information gathered, the students decided to take their learning to the next level. They convinced the school authorities to provide them with time-slots to disseminate the message to every child in the school and were soon found sharing these concepts during the assemblies.

As these exercises and changes were happening within school compounds in Dhaulpur, Priyanka suddenly remembered that she had something more important to do back home. Feeling empowered and responsible with a sense of understandable dignity and self-respect, which she seemed to have unintentionally imbibed with this newly acquired knowledge, she rushed to meet her brother-in-law. Her elder sister was recently ‘married off’—a term often used by many parents who see a girl child as a burden they should be relieved from at the earliest—and she felt the need to pass the information she had received through the SRH sessions that must reach the couple more than anyone else at the earliest. With multiple thoughts crisscrossing her mind, it was not easy for her to comprehend what was going to be more difficult—was it the sensitivity of the issue that she was about to discuss in her family or the insensibility she was going to be questioned of while challenging existing norms perpetuated in the name of establishing traditions in the society.

As she opened the topic, she could see her sister shy and drift away and her brother-in-law, obviously not amused with her presence, tried to stop her even before she got started. As her brother-in-law tried to resist the topic from moving uncomfortably further, Priyanka once again stood her ground, more determined to make her point loud and clear. The new approach used to disseminate information and bring forth behavioural changes during the SRH sessions had by now made her a good and confident negotiator and it only became evident as she began confronting and bargained with her brother-in-law to listen to her at their home. 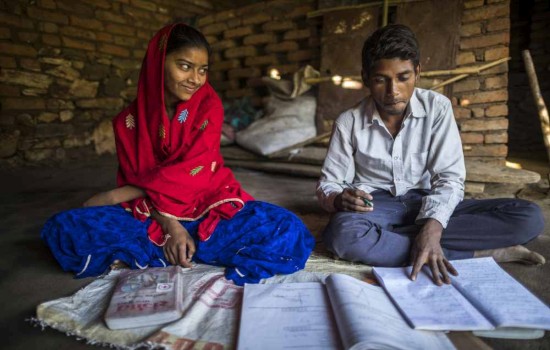 She urged him to realise how young her sister was and what good it would do to her and to the health and wellbeing of the children they wished to have in the future—if only they could give some more time and wait a little longer for her sister to get a bit healthier with better nutrition and healthcare before she actually conceived. She went on further to inform them about various contraceptive choices they had at hand and also about the Ujala Clinics and Counselling Centres from where they could go and verify the facts she had just shared. After she applied her emotional logic and logical emotion to pass the message she had for them, finally, the couple smiled. They agreed to meet the Counsellor at the nearby Community Health Centre and asked Priyanka to accompany them when they went there.

When she shared this story about how she had managed to convince her brother-in-law and sister with her friends and teachers at school, Priyanka realised that she had not been alone in this battle; many girls had undergone the same resistance when they tried to deliberate changes and had boldly dared to move forward to influence someone at home or neighbourhood, who they felt had to be informed to be transformed as well.

As NFHS recorded a staggering 44 per cent of children to be stunted and underweight being born to illiterate mothers, the teachers in the school where Priyanka was studying began to realise that these little children were becoming the real agents of change—by taking the message they had gathered from the school deep into the community and creating a ‘ripple-effect’ all along the process.

Women get the worst deal

The need to arrive at a comprehensive, multi-sectoral mechanism for controlling anaemia took centre stage during discussions and deliberations around nutrition, when the National Family Health Survey (NFHS) revealed a few years ago that 53 per cent of women aged 15 to 49 years were anaemic in India. Anaemia (when haemoglobin level is less than 12 gm/dl) occurs as a condition when the body does not have enough iron to produce the required haemoglobin present in the red blood cells to carry oxygenated blood throughout the body—rendering the person fatigued and susceptible to various illnesses thereafter. Acknowledging the presence of gender discrimination, inequality and lack of equity in food distribution and consumption in our country adds to the lacunae found in balancing nutrition intake that affects women more than men, when it comes to witnessing the brunt of this socio-somatic issue manifesting its effect on maternal, child and adolescent health eventually.

In India, we generally enjoy an abundance of culture and traditions that changes with every hundred kilometres we travel—indicating why blanket-cover programmes shelled out as centralised solutions in other parts of the world seldom work when we attempt to apply it here. Every solution in a nation that celebrates its diversity with pride needs to be tailor-made and customised, to meet specific community demands. It is amidst this situation that public-private-partnerships bloom where programmes of the government handhold the projects from the development sector to find a collective way out of issues peculiarly pertinent to various communities.

In Rajasthan, the percentage of anaemic women lofts to 47 points, where over 40.5 per cent young girls in rural areas get married in their teens. The consequence of this tryst in dynamics emerges when figures of school dropouts reach upward, as health-related issues become evidently rampant among pregnant women, lactating mothers and infants, snatching educational and economic opportunities these young adolescent girls could have had otherwise in the state.

Policies from the ground up

After realising the scale of anaemia affecting the masses in Rajasthan, a weekly iron and folic acid supplementation (WIFS) programme was introduced. Still, this alone, that even the policymakers realise, will not solve a problem that takes a much wider dimension, especially when it comes to balancing the locus of control required to make any effective and sustainable change possible. To be discussing about nutrition in a place where there is an abundance in the source of nutrition—if only we are allowed to identify them within the limitations of our situation, on our terms, and not be forced to see it from a limited western perspective—becomes a basic requirement in establishing a strong foundation based upon facts before building perspective that cumulates in progressive changes.

We may observe that our choice of food and preference largely depend upon socio-demographic factors based upon existing cultural mores and norms. That, in turn, influence consumption pattern, largely depending upon socio-economic factors of distribution, access, availability and affordability. The concept of nutrition becomes clearer when we begin to understand what we have at our disposal, that comes from the nearest farm, rather than looking upon nutrition as a far-fetched dream that can be materialised only if access to the idea of nutrition represented in pyramids on charts, often propagated by the West, can be realised.

Offering meat-based diet to balance nutrition in Rajasthan, as a remedy suggested by a few nutritionists with the western frame of mind, may divert us from understanding and acknowledging the cultural practices that make Rajasthanis proud vegetarians. Bearing that in mind, let us see what we have been growing in perhaps the toughest terrains of Rajasthan with the driest weather conditions. Studies done in the field to understand the variety of food available for an average Rajasthani reveal that the amount of nutrition sourced through locally-available millets, wheat flour, pulses, rice, bajra, sogra and milk products would meet the required diet necessities, at least, from the qualitative point of view.

What was found to be missing, though, was the quantity of intake while optimising these nutritious sources. Incidentally, observing this simple human behaviour as a structure within many structures, helped develop a simple strategy to influence better eating habits—to motivate individuals to eat in groups in the community and at home—as people who ate together, ate better. There are many under-utilised opportunities that may be spotted here. Rajasthan has a natural tendency to incline towards communal living. They live, walk, travel and work better in groups. So why not eat together? This simple idea when applied, started solving the problem of uneven distribution and discrimination as the issue of access and availability got eventually resolved as people started to eat better and healthier food—both in terms of quality and quantity—understanding the joy of sharing a meal across a table while forgetting differences.

Just as Priyanka had made visible changes in her community, a comprehensive, multi-sectoral mechanism for initiating purposeful and meaningful progressive changes is possible, when we take simple yet deliberate efforts in collaboration and with conviction. When people begin transforming the system around them they also undergo a transformation within—as strong empowered individuals capable of negotiating and bargaining at home and beyond. Dynamically complex issues pounding multiple sectors, do have simple solutions, even if they seem like a Gordian Knot. And at the end of the day, we realise it too.