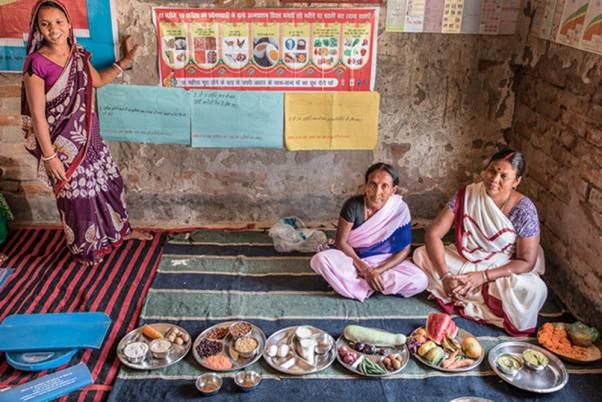 Women at an Anganwadi centre PCI

The recent report of NFHS indicates a high prevalence of overweight/obesity, hypertension and elevated random blood glucose levels in Indian men and women

NFHS 5 (2019-2020) is a nationally representative household survey providing data on population, health and nutrition at the district, state and national levels. The current round had incorporated certain improvements by including individuals above the age of 15 years in the assessment of biomarkers such as random blood glucose and blood pressure levels whereas this was earlier limited to the age group of 15-49 years in NFHS 4 (2015-2016).

Also Read| The Family Health Survey And Some Food For Thought

The survey data further shows that in 21 states/UTs, a higher percentage of men have RBG >140 mg/dl or are on medication for high blood sugar than women. This finding is in accordance to those of research studies which have found men to have a higher risk of incidence of diabetes when compared with women. Jammu and Kashmir is the only one with women having higher RBG than men. Higher RBG among men (>20%) was reported in Kerala, Andhra Pradesh, Goa, West Bengal and Lakshadweep with almost 1 in every 4 men in Kerala (27.0%) and Goa (24.1%) having elevated RBG. On the other hand, Jammu and Kashmir,and Ladakh reported only values of 8.0% and 8.3% among men respectively. Among women, only two states reported prevalence higher than 20% - Kerala (24.8%)andGoa (20.8%) while four states had prevalence less than 10%-Lakshadweep (6.7%),Jammu and Kashmir (8.7%), Nagaland (9.3%) and Meghalaya (9.5%).

The chart given below summarises the above findings. The presence of overweight/obesity, hypertension and blood glucose analysed together indicates that certain states/UTs like Andaman & Nicobar Islands, Kerala, Lakshadweep, Goa, and Andhra Pradesh stand out in the upper right quadrant. They have a high prevalence of overweight/obesity, hypertension and elevated RBG as compared to other states. This may suggest that individuals residing in these states/UTs may have a higher cardiovascular disease (CVD) risk. On the other hand, Meghalaya, Bihar and Assam show a low prevalence of all the three parameters.

Prevalence of Overweight/Obesity, Hypertension and Blood Glucose Levels among Adults 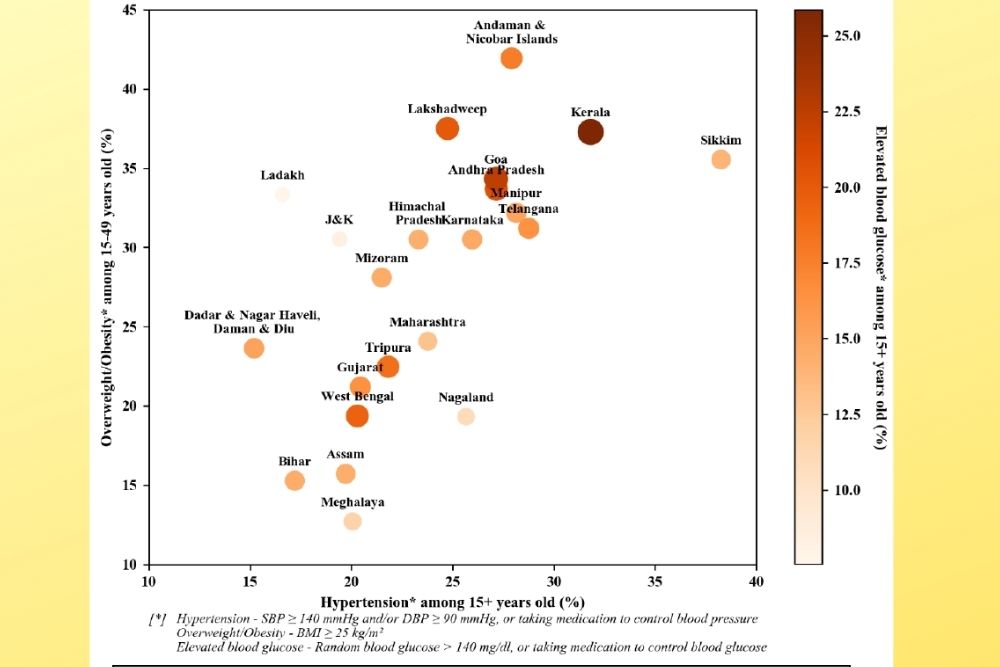 Non-communicable diseases such as obesity, hypertension, diabetes, as well as cardiovascular disease are lifelong illnesses and adversely affect the economic productivity and quality of life of the individual, family and the country at large. They add an immense burden on the existing health care infrastructure. India is still unable to control the rates of child malnutrition, anaemia and infections and the rise of NCDs will further add to the economic burden.

Thus, the states/UTs must focus on policy and programmes to lower the incidence of these NCDs as they will pose a huge burden to the existing constrained health infrastructure. The National Programme for Prevention and Control of Cancer, Diabetes, Cardiovascular Diseases, and Stroke (NPCDCS) focussing on early identification of risk factors and behaviour change should be implemented efficiently. One of the reasons behind this high in prevalence is nutrition transition which has resulted in a drastic change in dietary habits. The traditional diet comprising of fruits and vegetables, whole grains and pulses has been replaced with a diet rich in fats, refined carbohydrates and low in fruits and vegetables. Nutrition transition coupled with increase in sedentary behaviour due to automation, increased mechanisation has further increased the risk to these NCDs.

Early identification, treatment and management of these CVD risk factors as well as inculcating healthy behaviour including diet and physical activity will further reduce the burden of disease.Taking balanced nutrition keeps indicators of NCDs such as increased blood pressure, high BMI, and high blood glucose at levels necessary for the body and hence reducing risk of NCDs.