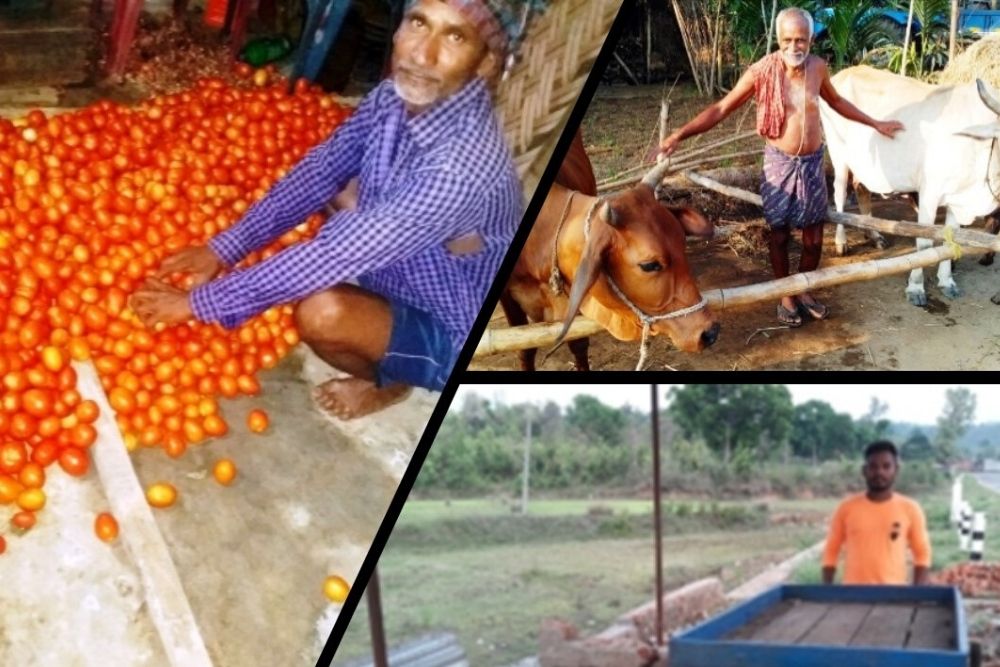 As the nation battles to contain the COVI19 emergency, the livelihoods of the most vulnerable local communities have started collapsing. Odisha faced two cyclones last year and the local economy was slowly reviving when COVID19 struck.

Take the case of Samira Mallick of Nagaripada village in Garadapur block of Kendrapada district, who ekes out his living by growing vegetables. Samira, 47 is a Dalit by caste and has a small landholding of 1.5 acres. He used to earn Rs 2000 from sale of tomatoes (@ Rs 20 a kg) and Rs 1100 (@Rs 15 a kg) from brinjals every week. Just before the lockdown, Samira used sell about a quintal of tomatoes and brinjal.

But today, the local vegetable market is only open from 6 am to 10 am in the morning. During this time, he can only sell half the produce. Because of the fear of Corona and the police, people fear coming to the market, and there are no storage facilities to keep the vegetables. As a result, the price of vegetables has dropped drastically to Rs 7 and Rs 5 per kg of tomatoes and brinjals respectively. The sale of pesticides and fertilizers have also stopped since for three weeks. Without this, Samira’s entire vegetable crop will be wiped out. Vegetable cultivators like Samira are losing over 65% of their earlier earnings each week.

There are 85 such farmers in the village, and almost 70% of the population depends on agriculture and dairy in the district. Samira says unless government helps the small farmers, they will quickly fall into a debt trap even as their produce will go waste and start rotting in the field or at home.

Samira’s neighbour from the same village, Kishore Chandra Nayak, is small farmer with an acre of land and a pair of jersey cows. With this he used to sustain a family of 7 members. Sometimes he also tends to nearby land as a sharecropper. He used to sell milk in the nearby market and used to earn Rs 8840 per month.

But the lockdown has forced this small-scale farmer to brink of poverty. For the last month, he has been unable to sell the milk to nearby traders. But with sweet shops closed and the demand for paneer declining, his sales have plummeted. Even the milk producers who used to sell milk to OMFED (The Orissa State Cooperative Milk Producers' Federation Limited) are facing a crisis since OMFED is refusing to buy milk now.

Not only has Kishore been unable to sell milk for while, he has also had to purchase cow feed worth Rs 3036 last month. There are 78 other farmers like him, who are in the same boat. Kishore says if after the lockdown is lifted small traders or OMFED does not come forward to buy milk, he will be forced to sell his cows since he will not be able to afford their feed. Another neighbour, Bhanja Kishore Das, who used to make paneer and sell it to the sweet shops, says he and family will face starvation in a week.

Rafit Nayak from Aligonda Gram Panchayat in Mohana block of Gajapati district is another example of communities which have lost their livelihood due to the lockdown. Rafit made between Rs 500 to Rs 700 each day selling panipuri, and had plans to expand his business by going to the nearby market. Instead, the sole earning member of his family—he is expecting his second child soon-- has lost all his savings and says he will have to borrow huge amounts of money to re-start his business. The support from PDS (subsidised rice & Rs. 1000- each) has helped the family, but it not enough.

But perhaps the hardest hit are the agricultural wage labourers. Bainshi Das , of Bipulingi village of Chhatrapur block in Ganjam district, is jobless and his family faces starvation. As a
ration cardholder he received Rs. 1000 in cash under the National Food Security Act (NFSA) and State Food Security Scheme (SFSS), which entitles him to 60 kg rice for 3 months, but that is not enough. Ganjam district is one of the migration prone district, and 24851 migrant labours returned to the district by 7th April.

What can the government do?

There many quick steps that the state government can take to help these livelihoods of the vulnerable people: These include:

2.Monetary support in the absence of any form of work. The government also needs to provide monetary support to households as subsistence support beyond Rs 1000/-. All vulnerable communities especially landless daily wage labourers communities must be provided cash assistance of Rs 10,680 or the monthly wage, whichever is higher.

3.Since government is allowing essential services like vegetable vending, it should allow the purchase of vegetables from the villages from the farmers.

4.These small traders who come to village to purchase vegetable should be provided passes by the police.

5.Government should allow opening of insecticides and fertilizers shops at least for a day in the village.

6.During the lockdown period, government should purchase milk from them through OMFED for at least two times a day.

-Consider buying and establishing a depot to buy vegetables to prevent losses.

-Build a storage facility in the village

-Fixing price for the vegetables to prevent losses of these small farmers.

-Support for cow feed for a month.

-The purchase of milk by OMFED needs to continue

-Ensure insurance and vaccination support for livestock at subsidised rates.

-Loans from centralized banks with little or no interest for at least 6 months to a year which can support local livelihoods like street vendors to come up again and lead a normal life.

-Support for agriculture to restart the livelihood

-Unless this is done, the cycle of loss and starvation in Odisha (and the rest of the country) will not end.

(The author works with Odisha Office of ActionAid)