Home Story Development Of An Atlas Of Indian Foods: Why Indians Need To Know What They Are Putting Into Their Mouth 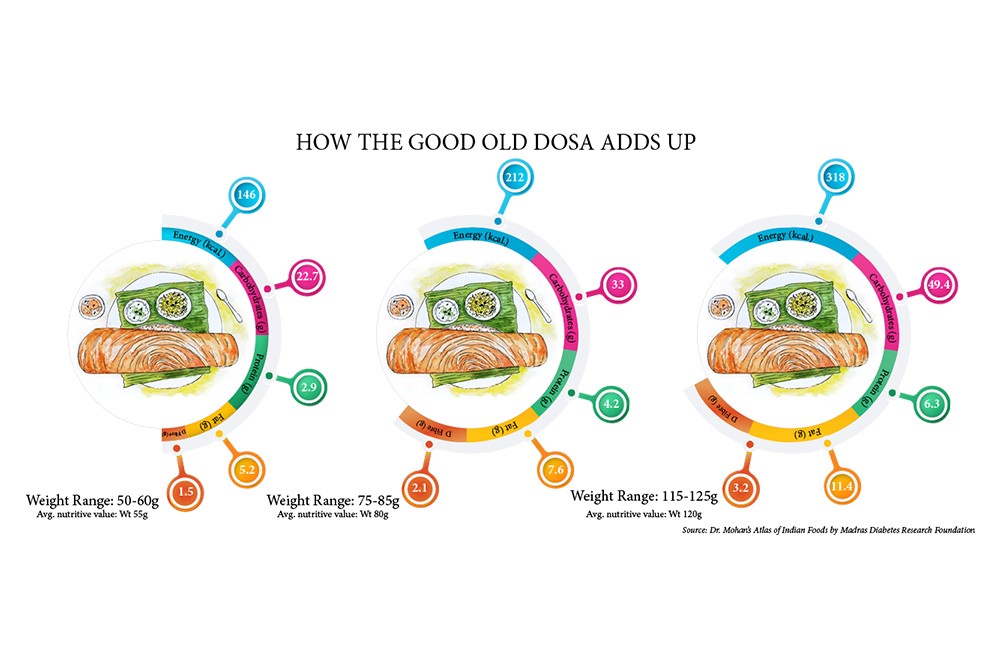 Development Of An Atlas Of Indian Foods: Why Indians Need To Know What They Are Putting Into Their Mouth

The double burden of malnutrition places India in a difficult position, because there cannot be one single nutrition health message for the whole country. One way in which the public can be educated about diet and nutrition is to know what exactly is the composition of the various foods that they eat.

India suffers from a dual burden of both undernutrition and overnutrition. Thus, ‘India paradoxically has the highest number of stunted and underweight children in the world, and on the other hand the prevalence of obesity and overweight is also increasing rapidly. The latter is not only among the rich but also among the middle class and surprisingly, even among the poor. This means that while, on one hand, there are some states of India where there is protein-calorie malnutrition, in other places there is obesity due to an excess of energy-dense junk foods being consumed. This places in India are in a rather difficult position, because there cannot be one single nutrition health message for the whole country. One way in which the public can be educated about diet and nutrition is to know, what exactly is the composition of the various foods that they eat. In the West, where one can easily assess the food intake, eg., two slices of white bread, one apples, a slice of pizza and so on as most of the food is standardised. In India, on the other hand the way the food is prepared is very complex, and hence it is extremely difficult to quantity what we have eaten.

Till recently, there was no atlas of Indian foods which gives the composition of various Indian foods. The Madras Diabetes Research Foundation and Dr. Mohan’s Diabetes Specialities Centre at Chennai took up this challenge a few years ago. A team of 4 scientists and 14 research dieticians worked on this project for almost seven years to produce the first and only ‘Atlas of Indian foods’. The Atlas was first published in 2013, and was reprinted on a couple of occasions and it is again being reprinted now. The Atlas contains colour photographs of culture-specific diverse Indian foods which have been standardised by obtaining each food item from more than five different sources i.e. various households, restaurants etc. The nutrients were calculated both from raw ingredients used in the recipes and cooked food analysis carried out at our in-house analytical lab. The nutrient data were obtained from the Nutritive value of Indian foods and the USDA.

Moreover the Atlas goes to the extent of providing the details, for eg. for a small dosa, medium dosa, big dosa and so on. For example, if we look at the pictures of various sizes of dosa (see photograph below), once can see that a small dosa (55 g) contains 146 Kcal, while a large dosa (80 g) contains 318 Kcal! 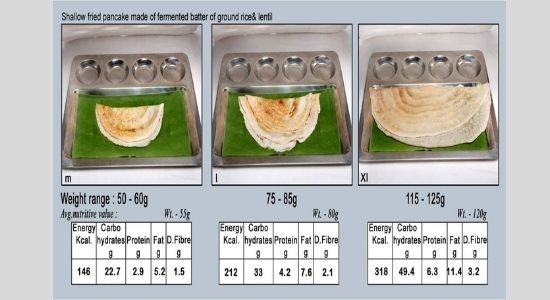 Thus, by just looking at the atlas one can get an exact idea about the size (portion) of the food, that one has eaten and then one can easily calculate the number of calories as well as the composition of the same. We believe that this ready reckoner should be used by everyone - the general public, students, doctors, healthcare professionals, teachers, and others, as it will provide accurate information about the various Indian foods. The atlas currently provides details on 247 food items and it is proposed to expand this number to make it more inclusive of foods from different parts of the country.

The Atlas will be useful for those who are overweight and wish to reduce weight, as they can plan their meals based on foods with lower calorie intake. On the other hand, since the protein content of the various foods are provided, it is also easy to supplement foods with adequate protein intake for those who are undernourished, so that their overall nutritional status can be improved.