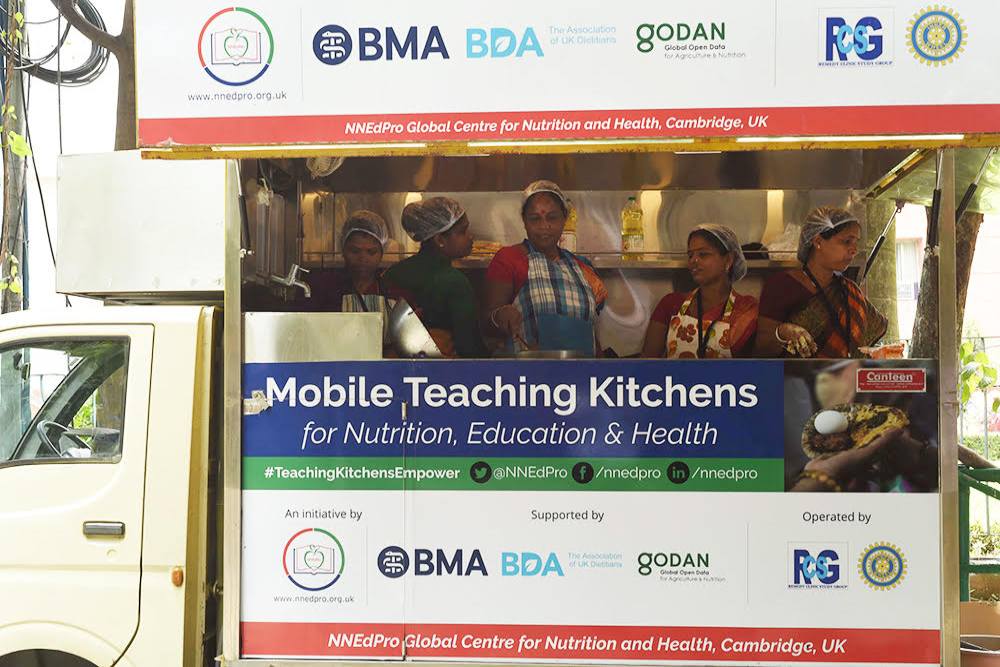 The inspiring story of a field study from the City of Joy, where slum women led the flagship project as budding micro-entrepreneurs

“Malnutrition has three sides to it and often they coexist. It could be overnutrition, which is often obesity with type II diabetes. It may be undernutrition, which is usually due to lack of proteins among other things. Or it could be due to deficiency in multiple nutrients, which means minerals. We have to have policies and also prevention and treatment in place, which are able to tailor the requirements of the changing needs of individuals.”
—Dr. Sumantra Ray, Founding Chair and Executive Director of the NNEdPro Global Centre for Nutrition and Health, University of Cambridge, UK

It was a rain soaked afternoon in a busy traffic area of Greater Kolkata on August 29, 2019. A group of enthusiasts gathered to experience the success story of an action project that has targeted malnutrition through education of nutrition to slum dwelling mothers. A Mobile Teaching Kitchen (MTK) run by slum women of Kolkata was parked in the location and eight neatly dressed women, beaming with confidence and joy, independently ran the business—explaining efficiently and articulately to their customers the nutrition value of the templates they were serving. On that day, the food template included gola roti (a flat bread made of wheat, gram flour and vegetables), split chick peas curry, egg curry with capsicum, tomato and onion, and chikki (sweets made of sesame seeds, peanuts, jaggery and ghee). 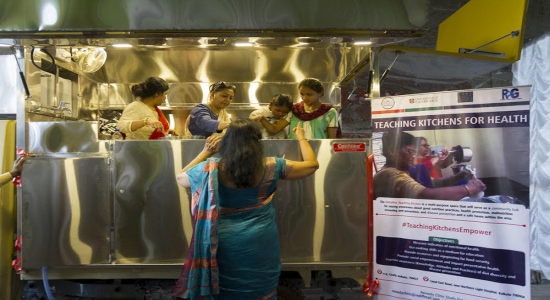 We bought the lunch coupon at Rs 40 per plate and devoured the food, sitting under the umbrella where a small plastic table and four stools were placed. The ingredients were locally sourced, the presentation was neatly laid out, hygiene was taken care of and the water served was boiled. The cleanliness of the kitchen needs a special mention. And while we ate, we indulged in engaging conversation with the budding women micro entrepreneurs, while the stakeholders, duly credited for their unfazed handholding support, facilitated. And the story unfolds thus.

The uniqueness of the social engineering initiative include a strategic partnership between health educators, researchers, key influencers and change makers in nutrition practice and policy. And the success story is a result of the meaningful collaboration of The NNEdPro Care Team, Bhavishya Shakti Researchers, Remedy Clinic Study Group health and nutrition service providers and Inner wheel club members of Greater Kolkata, committed to the cause of providing handholding support to underserved communities. A cooperative society named Bhavisya Shakti has been registered recently as a concrete outcome of the intervention.

The broad objective of the intervention was to shape future through education, awareness raising, capacity building and collaboration with a specific intent to target malnutrition through mobile teaching kitchen.

--Using MTK, malnutrition was targeted through the education of nutrition to slum dwelling mothers

As a first step forward, the project launched MTK as a nutritional education tool in two Kolkata slums (RG Kar Canal slum and Chetla Slum) in February 2017, to improve awareness of diet diversity and disease prevention by using locally-sourced food and cooking skills, with an objective to evaluate the efficacy of using MTK to provide nutrition education and assess onward transfer of information. 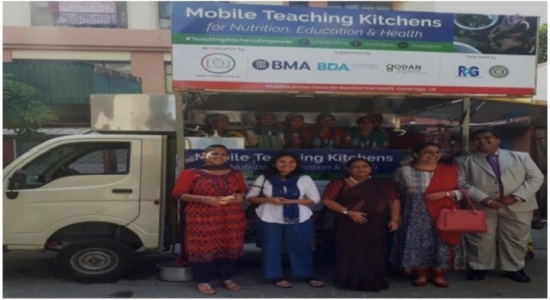 A “see one, do one, teach one” model was followed to transfer nutrition knowledge successfully to peers where markers of malnutrition were assessed before and after the programme. Food templates were developed with the help of skilled dieticians keeping in perspective measuring indicators of nutritional health, using cooking skill as medium for education, providing resources and signposting for food security, promoting social empowerment and impact preventive health, and improving awareness (knowledge, attitude and practice) of diet diversity and disease prevention. Local volunteers, trained in healthy cooking, transferred care nutritional principals through demonstration of cooking sustainable, nutritional and affordable meals. So far ten templates have been experimented in the platform, and successfully so.

Evidence suggested that knowledge transfer can lead to changes in diet and there is potential to utilise this nutritional knowledge into micro enterprise type model. The key outcome of the first action step hinted that self perceived nutritional knowledge of mothers in an Indian urban slum improved after participating in a mobile teaching kitchen. Thus, the culinary sessions were used as an effective and enjoyable education tool to enhance nutrition knowledge and practices. 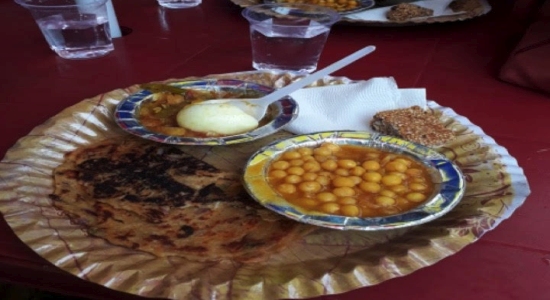 Borrowing inspiration from the gathered experience, the next step was taken to experiment the effectiveness of MTK as a micro-enterprise model with the help of the slum-dwelling women beneficiaries that could be replicable in other locations.

And progressing to a micro-enterprise model, few piloting selling sessions were conducted in salt lake, Alipore and Lake Town of Kolkata. Customer satisfaction information was collected through structured questionnaires that gave a broad assessment of the initiative in terms of its appearance, novelty, hygiene, price, professionalism, taste, van appearance, recommendation to others.

And, meanwhile, signs of women empowerment were visible everywhere including in the confidence in their approach, neatness in their outfit, articulation in their voice, and conviction in their spirit. These slum women turned micro-entrepreneurs are the torch bearers of the flagship project.

Out of the eight women present for the display that day, six of them work as domestic helps, one is a homemaker and the other is a primary school teacher in a slum school. They were representing the two slums, taken as pilot for the project and are educated till primary or secondary level.

Konika mandal, shares her experience with the project thus. “Perception about food has changed. And perception of people in the slum about us has also changed. They find us cleaner and ask us the secret behind our neat outfit. We explain the importance of hygiene in daily life as a major requirement for preventive health.” Reflecting on the poor living conditions of slum-dwellers, she adds, “We have to keep ourselves afloat within our limited capacity.” Santoshi quips, “See, I no more let my nail grow. It leads to infection.”

Pooja, a domestic help, insists that she subtly provides nutrition knowledge to her middle-class employer, “The best part is, she is quite receptive.”

Mousumi, a homemaker, glows with joy as she shares her story. “This platform has given me a new identity and added confidence to explore options to be financially independent. One can only have access to decision making if you have access to income.” Soloni, a teacher in a slum school, confirms that this micro enterprise model is designed well to combine both culinary and enterprising skill among slum women.

The aim of the project is to provide handholding support to the underserved community. Debasish, a researcher from the facilitator team insisted that if such model be replicated elsewhere, it is essential to gather baseline information from the field in a meticulous manner. Unless one understands the requirement of the context, intervention will not have desired impact on the community.

Ms Chitra Ray, a committed member from the Inner Wheel Club, confirmed that since the beginning of the pilot project two members from the club unfailingly remain present on the spot to help the beneficiaries articulate their motive. “Handholding support in the initial phase is fundamental to the success of the project. Unless foundation is strong, the entire purpose will be lost.”

My take home lesson from the project confirmed my conviction that integrating nutrition and health education along with women empowerment intervention into an agricultural programme, if well designed, can improve child and maternal undernutrition in a relatively short period of time. However, on the basis of my field observation, I would also add that Intervention in development sector may be initiated in a carefully woven fashion, only when one has the foresight to sustain the concept, confidence in its ability to execute, commitment to provide handholding support until the beneficiaries learn the essence of the intent of the action and philosophy behind it, and are able to carry it forward in a truly collaborative approach.