Home Story Are Samosas Chasing You? 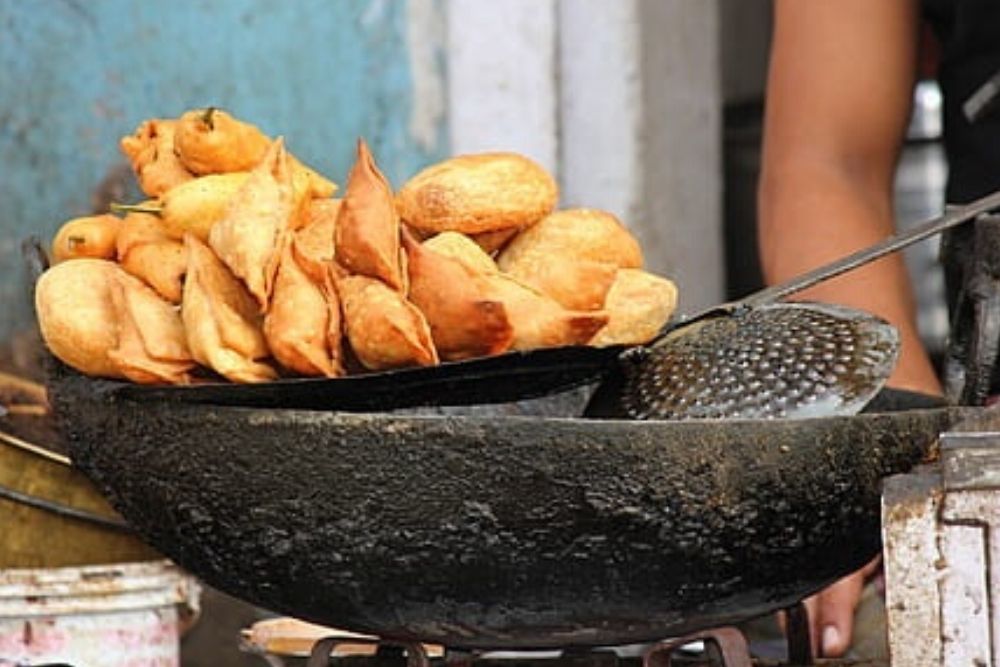 Are Samosas Chasing You?

'Samosas and other snacks will always follow you. The only way to stop indulging in them is to understand how foods cooked in polyunsaturated vegetable oils --sometimes with dangerous trans fats-- can have deadly consequences on your health..'

Let me start with a confession. For the first 57 years of my life, I had a weakness for tempting samosas, be it anywhere, such as in office, at parties or even in the marketplace.

The other day I heard a colleague of mine saying that samosa has a strange way of finding him, wherever he, is and he cannot say no to it. It was a small, official, new year get together, and the two of us were sitting in the back row. The “chamchams” and samosas came to the back row also. He could say no to “chamcham”, but not to the samosa. Then he narrated his plight: he does not want to take samosa, but he cannot resist it. Somehow samosas have the habit of finding him, and forcing him to have it. I could understand his helplessness.

For me, things changed more than one year back. Till then, I had no idea of nutrition, and had no knowledge of the difference between what looked good, and what is good. Like most of us, I used to love sweets, ice-cream, cookies, cakes and namkeens.

Slowly, I had medical issues in the form of raised cholesterol, high blood pressure and at least two prescription medicines everyday. Taking medicines in the morning and evening became a habit, and the culmination was having fatty liver Grade II in February, 2019. Then, by chance, I was introduced to the subject of nutrition and healthy food, and ever since I have gone deep into it.

I slowly realized, that most of our chronic diseases like obesity, diabetes, blood pressure, heart disease are self-inflicted by having wrong food. Not only that, the world is under the grip of lifestyle diseases. Diabetes which used to be a rare disease even in the early 20th century has become a scourge. According to the World Health Organisation, while the world had about 10.8 crore diabetics in 1980, their numbers have swelled to more than 42.4 crores in 2014. India, meanwhile has become a diabetes capital.

As for obesity, the 20th century, particularly after 1980, has seen the spread of the epidemic. To take a bad case, the US which had just 15 percent obesity in 1980, has a massive 42.2% of obese people today. Similarly, there are smaller countries where more than half of their population is obese. If you add obese and overweight people, virtually everyone is overweight and sick.

I discovered that in our food there are two major problems. Most of the food cooked outside home is prepared with vegetable oils, which have been touted as healthy, even by dietary guidelines. All these vegetable polyunsaturated oils are rich in omega 6 fatty acids, and are harmful and most probably is the reason for heart disease. The saturated fats which humanity has been having for thousands of years have been demonized as a source of heart attack, and the world has embraced vegetable oils. As a consequence, heart disease and stroke continue to be the biggest two killers in the world.

After our newly acquired knowledge, we have strenuously given up using polyunsaturated omega-6 rich vegetable oils and use only saturated fats in the form of ghee, butter and coconut oil, monounsaturated mustard oil and omega-3 rich flaxseed oil. With the realization that most of the eatables made outside home have too much sugar or vegetable oils, we have stopped eating outside home. For samosa, we know that it is definitely made from omega-6 rich vegetable oils, which in some cases have trans fats which are extremely dangerous for everyone, it has totally lost its attraction for me for more than a year.

Nowadays, when I come across samosa or anything made from vegetable oils I give it a go by without thinking for a moment. I know for sure, however tempting it may look, it is not healthy and is dangerous for my health. So that day when the tempting samosa came to me, I could say easily no to it, as well as to ‘chamcham’ though my colleague showed helplessness that samosa could find him in the back row and he could not say no to it.

Needless to say, I am much better off in my health today. My cholesterol levels are what doctors expect you to have, my fatty liver has reversed to near normal, my blood pressure is normal and my being pre-diabetic has become non-diabetic.