Home Story An A To Z Guide To What The Prime Minister Thinks, Says And Does On The Nutrition Front

An A To Z Guide To What The Prime Minister Thinks, Says And Does On The Nutrition Front 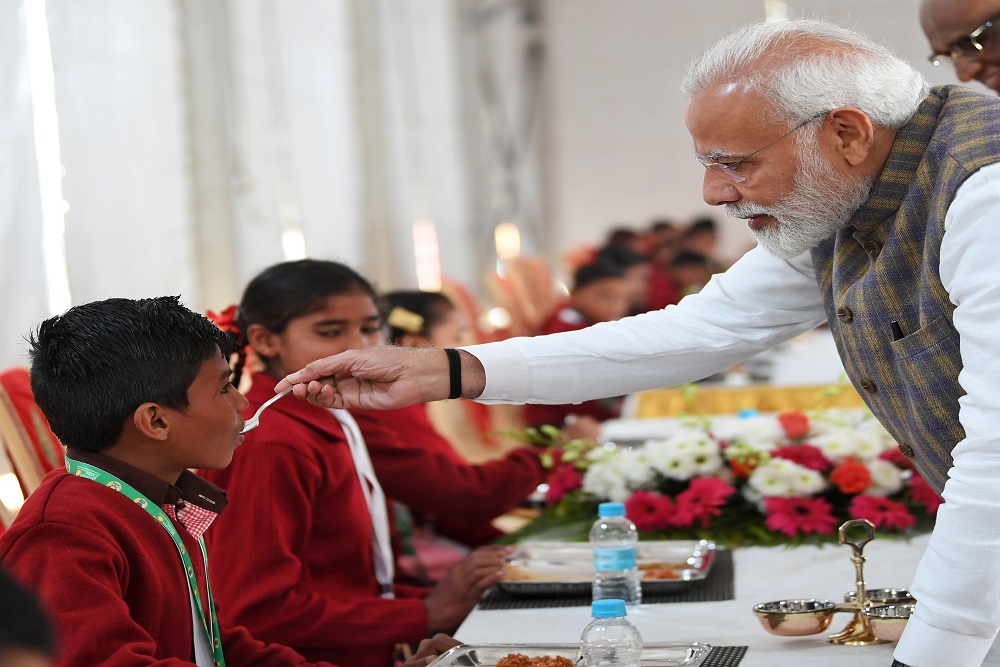 “Whenever you think of the PM, be it to criticise or to compliment, think of Poshan Mission and not Narendra Modi.” On March 8, 2018, when Prime Minister Narendra Modi launched his Rs 9046 crore flagship National Nutrition Mission in the small town of Jhunjhunu in Rajasthan, his dramatic words had women lifting their ghunghat to snap a shot of him on their phone cameras. Not just. It had nutrition gurus across the country sitting up and taking note. It was possibly India’s first admission that things were going horribly wrong on the nutrition front.

With the Poshan Maah starting from September 1, here is an A to Z guide on what the Prime Minister thinks, says and does on the nutrition front:

“Sometimes the development of the body of a child, girl or boy, stops. Sometimes the the baby born is under-weight. Lack of awareness plays a greater role in such cases. We need to get out of this problem. This is not the job the government alone. Things will change if it turns into a mass movement and the people are educated and taught.” February 2018

B FOR BETI BACHAO

Why do girls suffer from malnutrition more than boys? Gender discrimination casts its shadow. As the PM launched the National Nutrition Mission in February 2018, he expanded Beti Bachao Beti Padhao scheme, tweeting: “At the programme in Jhunjhunu today, we also marked the expansion of the #BetiBachaoBetiPadhao movement to 640 districts across India. This will give wings to the aspirations of lakhs of young girls. We are fully aware of how girls are distinguishing themselves in various fields.”

“I said camel milk is very nutritious…I was mocked and cartoons and derogatory comments were made. Today, Amul's chocolates have a huge market and the rate of camel milk is double than that of cow milk.” September 2018, while inaugurating Amul’s chocolate plant at Anand in Gujarat.

Here’s an innovative initiative from Nashik that has turned into a mass movement. And the PM takes pleasure in pointing out its success: Muthhi Bhar Dhaanya, in which Anganwadi workers collect a handful of rice grain during the harvest season from people. The grain is then used to make food for children and women.

Three-quarters of the world’s teenage births take place in India. New research shows how the health of children born to adolescent mothers is far inferior to those born to adult mothers. “Very few people are aware of the fact that child marriage is one of the reasons for malnutrition,” said the PM in February 2018.

“If the children of the country are weak then its growth would also slow down. For any infant the first thousand days of life are crucial. Nutritious food, dietary habits during this time, decide how its body will become, how it will be in reading and writing and how strong it will be mentally. If a citizen of the country is healthy, no one can stop the development of the country.”

The health of mothers and sisters is a priority for our government. We have integrated the women and child development department with the health department for this. Good nutrition is foundation of New India.” February 2019

“Earlier we heard of people getting heart attacks in the 60s but now you hear men in their 30s and 40s suffering heart attacks. Lifestyle diseases and disorders are on the rise. Small changes in our lifestyle can make all the difference.” August 29, 2019

“We should strive towards making our children healthy, with the right weight and height holistically by the year 2022 that will mark 75 years of Independence so that we can proudly declare before the world that we have achieved this in the field of nutrition.”
February 2018

The traditional first rice ceremony has turned a new corner. It has been taken up by the Poshan Abhiyaan as well as by the civil society, as a moment of community celebration. Centred around anganwadi centres, women, men and family members engage in right nutrition action for children.

“In 1942, the clarion call was Karenge Ya Marenge (do or die), today it is Karenge Aur Kar Ke Rahenge (we will do and surely do).” So said the PM, on August 9, 2017, in Lok Sabha on the 75th anniversary of the Quit India movement, calling for a movement to end poverty, ignorance and malnutrition.

In May 2018, the PM interacted with women beneficiaries of free cooking gas connection under the Pradhan Mantri Ujjwala Yojana, via video-conference, asking them to give healthy and nutritious food to their children and not rely on junk food: “I will never forget one of Premchand's stories, Idgah. "The story is about young Hamid, who does not buy sweets or gifts during Id but buys a 'Chimta' so that his grandmother does not burn her hands while cooking.” February 2018

“Millets have been a part of the Indian diet for centuries and something our forefathers ate. Post independence, the Green Revolution in the 60's popularised the production of wheat and rice and over the decades, millets have been grown lesser and lesser. Millets are called "super cereals" since they are rich in vit b, protien and fibre.”

If the dream in 2014 was that of “Smart Villages,” the PM is now talking of “Nutri Smart” villages—where communities would take charge of their nutrition requirements, integrating agriculture with natural resource management, water, sanitation and hygiene (WASH)—to check malnutrition.

In the budget speech of Union Budget 2018-19, the new scheme was announced to limit the erratic fluctuations in the prices of onions, potatoes and tomatoes. The pilot project is now being rolled out across eight states

He stretched, breathed, struck a pose with 30,000 Indians in Ranchi on the International Yoga Day this year and gave them the mantra, the “four P mantras” for a healthy life: pani
(drinking water), poshan (nutrition), paryawaran (environment) and parishram (hard work).

Reinvent and redesign the biggest social programme in the world, ICDS, at the heart of which are the frontline ASHA and anganwadi workers, who work to provide basic healthcare and nutrition inunder-served areas. In September, 2018, the PM announced a hike in their remuneration by over 50%, hailed as a "Diwali gift"

The deadline is 2022, when India turns 75. And the need of the hour is to create the same spirit that existed at the peak of India’s freedom movement, 1942–1947, said the PM in his August 25 “Mann Ki Baat”radio programme. The five years, 2017—25 are about ‘Sankalp Se Siddhi’ (commitment to fulfilment), he said.

Under Poshan Abhiyaan, the government has fixed targets to reduce stunting, wasting, anaemia (among young children, women and adolescent girls) and low birth-weight by 2 per cent, 2 per cent, 3 per cent and 2 per cent per annum, respectively.

About 30–40% of children contract diseases because of the unhygienic practice of not washing hands before meals and die. Who will make it a habit and teach the mothers to wash their hands before feeding the child? Sometimes the child puts something in his mouth. Who will tell them that the child’s hands should also be washed.
February 2018

V FOR VALUE ADDITION IN FARMING

In October 2018, the PM batted for new technology in agriculture sector as he inaugurated Krishi Kumbh in Lucknow, highlighting value addition in farming to be the answer to the problem of crop abundance that causes brings down crop price: “The government has allowed 100% FDI in the food processing sector. We all are aware that selling tomatoes will generate less income than selling tomato sauce in a bottle.”

W FOR WAR OF WORDS

Acrimonious campaigns, verbal duels, jibes and jeers are par for the course in Indian elections. The mudslinging this year, however, had a new twist: malnutrition and hunger. From “Farmers are vote bank for Congress, food providers for us,” to "Tughlaq Road Chunav Ghotala,” the PM did not mince words during campaign 2019..

What about the PM’s own nutrition? What’s the secret to his stamina? According to the PM, it is "gaaliyan," the Hindi word for “abuse”. “Pichle 20 saal se main daily 1kg-2kg gaaliyan khaata hu,” he told the assembled crowd at the Bharat Ki Baat event in London in April 2018. On a more serious note, as the PM told Bollywood actor Akshay Kumar in a candid interaction in April 2019, he eats frugal, he eats home-cooked food and he eats on time. ”If I catch cold, I drink warm water, without adding anything to it,” he added.

Think outside the box and give us an idea. That was the “it” message in August 2017 from the PM to young entrepreneurs and CEOs. As the NITI Aayog got into the act, shortlisted candidates met the PM with their ideas on a host of topics, including on health and nutrition. The point? To include worthy ideas in policy-making.

It was his first year as the PM. The whiff of malnutrition was still not in the air. Or was it? Modi reached Brisbane, Australia, in November 2014 for the Group of 20 Leaders Summit. Within hoursof landing, he stepped out to the Queensland University of Technology, to interact with agriculture scientists. What was he interested in? Bio fortified bananas. India, with its cereal and pulse based diets, faces a rising burden of zinc deficiency. Bananas fortified with zinc, vitamin A and iron could be a probable solution. Could that be the next Poshan announcement?