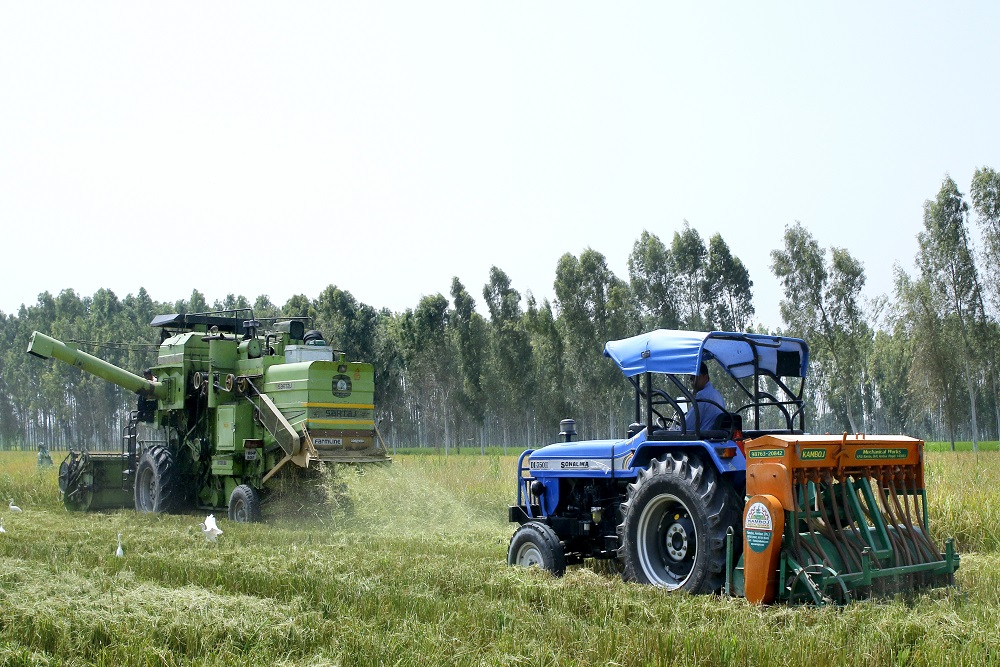 Climate change is one of the most extreme challenges Indian agriculture is facing today and will have to deal with in future. There have been overwhelming and growing scientific evidences to establish that the world is getting warmer due to climate change and such increasing weather variabilities and worsening extremes will impact the agriculture sector more and more adversely.

The growth story of Indian agriculture since the days of food scarcity (in the mid-1960s) to the present satisfactory production level of food grains has been very impressive. In these efforts, land degradation and environmental challenges have however emerged to thwart sustainability of agri-food systems. The frequent occurrences of natural disasters like food, drought, storms, hails, cyclones have led to severe hardship and farm distress. Feeding a growing population and ensuring food and nutritional security in future thus becomes a daunting challenge in a changing climate. It is in this context, suitable policy actions with scientific interventions become imperative for Indian agriculture to adapt and mitigate climate change impacts.

There has been a growing interest in India to scientifically ascertain the impacts of agriculture sector on climate change and the impact of climate variability as well as climate change on farm sector of the economy. The second Biennial Update Report (BUR) submitted by Government of India to the United Nations Framework Convention on Climate Change (UNFCC) in December 2018 mentions that agriculture sector is responsible for 16.2% of the total Green house gas (GHG) emissions. Scientific analyses have predicted that the trend could lead to a decline in agriculture production due to further climate change. Studies carried out at the Indian Agricultural Research Institute (IARI), New Delhi, have indicated the possibility of a loss of 4 to 5 MMT in wheat production with every 1 degree centigrade rise in temperature. This study has assumed that irrigation would be made available at present level, which of course may not be a possibility considering the receding Himalayan glaciers and increased demand of water from other sectors.

The Economic Survey in 2017-18 (it has an exclusive chapter that covers climate change and its impact on agriculture in India) has warned that “Climate change could reduce annual agricultural incomes in the range of 15% to 18% on an average, and up to 20% to 25% for unirrigated areas”. It has further pointed out the stagnation of growth in agriculture gross domestic product (GDP) and farm revenues in the preceding four years due to repeated monsoon failures.

The quality of food grains is also significantly affected by temperature in many crops, which could in turn have great impact on the nutritional security aspects in a developing country like
India. Research has indeed shown that the decline in grain protein content in cereals could partly be related to increased carbon di-oxide concentrations and temperature. There are also reports of quality of Basmati rice being adversely impacted due to temperature increase beyond the optimum level. The yield in temperate crops like apple has been seen to be directly related to climatic extremes. Average productivity of apples in the traditional Kullu and Shimla regions of Himachal Pradesh has often been attributed to inadequate chilling in recent decades, crucial for good apple yields. Pest and disease incidences in any crop are functions of ambient temperature and humidity. Crop -pest/ disease interactions will therefore change significantly in an era of climate change.

The author (as a part of his Masters Dissertation at the University of Birmingham) attempted to analyse the weather data for Odisha State to find out the trend, if any, on the climate variables and also to see correlation with the production of major crops. Analysis of the weather data, mainly rainfall (precipitation) figures for all districts since 1901 and temperature data since 1931 (till 2010) was made. Crop production data (for the wet, Kharif season) for past one and half decades (period of pronounced climate change impacts) was taken for correlation and regression analysis of seasonal weather variables. These analyses presented interesting results. It empirically established that monsoon onset is getting delayed (than the normal date of onset) in the recent years that may adversely affect cropping system of the state. Mean annual precipitation (rainfall) and mean number of rainy days showed a decreasing trend over the last one century (since 1901). This would obviously disturb crop choice and crop planning. Although total amount of rainfall in a year has decreased over the years, occurrence of very heavy rainfall events in the state has increased in the recent period (last 15-20 years). Similarly, the mean annual maximum temperature has shown an increasing trend in the analysis period with a decrease in the mean annual minimum temperature. All these results call for effective planning and research, as temperature regimes greatly influence the growth pattern and productivity of rice and many other crops.

Similar studies have since been carried out by researchers which has established that extreme weather events are becoming very common in the entire country and thus, necessitate suitable policy measures at all levels -- Union, States and the Local self-Governments, for framing and implementation of mitigation (and adaptation) strategies to arrest the trend.

The threat of climate change has necessitated framing of suitable policies by individual governments and international community. India has been doing a balancing act between growth and sustainability in its climate change policies and leading the developing countries to place agriculture in the ongoing negotiations. The National Mission on Sustainable Agriculture as a part of NAPCC (National Action Plan on Climate Change) since last one decade has focused to make Indian agriculture sustainable in the light of likely risks arising from climate variability.

The ICAR (Indian Council of Agricultural Research) has initiated the National Innovations on Climate Resilient Agriculture (NICRA) network project since 2011 to enhance resilience of Indian agriculture to climate vulnerability through strategic research and technology demonstration as well as capacity building of all the actors in the system. Similarly, CGIAR (Consultative Group on International Agricultural Research) Program on Climate Change, Agriculture and Food Security (CCAFS) is also promoting adaptable and resilient agriculture and food systems in many countries including India. ICRISAT (International Crops Research Institute for the Semi-Arid Tropics) has also developed a pool of climate-smart technologies. Few such approaches highlighted by ICRISAT for building climate smart villages like the watershed management approach (improving rural livelihoods by rehabilitating natural ecosystems) and the meteorological advisory and farm systems approach
(building resilience agro-ecosystems by using climate information) have gained acceptance in many project areas and being replicated elsewhere.

Addressing food security and climate challenges in a “business-as-usual” approach will make the tasks more difficult. Therefore, it’s high time that rationale of climate-smart agriculture (CSA) is understood and appreciated by decision makers at all levels. There should be structured trainings to build the capacity of officials of relevant departments to sensitize them to understand the diverse impacts of global climate change events at local levels. Similarly, defined institutional architecture has to be built into the Government system to sustain focus and integrate activities into ongoing schemes and programs aligned to sustainable agriculture practices.

The hardest political problem in climate change policy framework comes from the least appreciation of a changing climate at the level of local self-governments. Till a village Sarpanch is sensitized to tune the development strategies of a Gram Panchayat for adapting agriculture to climate variability, any efforts at higher levels of governance may not bear desired fruits. The institution of a Panchayat in Indian context has the capacity to leverage funds from a plethora of schemes. Allocations under MGNREGA can be purposefully utilized in climate-proofing projects such as farm ponds; soil and water management through participatory watershed approaches; plantation and agro-forestry; and many other eco-friendly activities that will adapt and build resilience to climate change.

Fortunately, the ICAR, the state agricultural universities (SAUs) and even the private sector have been pursuing their research works to develop new and more tolerant cultivars to multiple (both biotic and abiotic) stresses. Governments at both central and state levels must enhance funding support for development of technologies and approaches that suit local crops and ecology in a complex scenario of climate variability. Simple and affordable insurance products should be properly implemented to create safety net for the farmers, especially the small holders who are often the neglected part of agricultural community. There is also need of knowledge sharing platforms for all stakeholders to ensure wider adaptation and mitigation to the weather variabilities.

Priority has to be accorded for upscaling research on emerging areas of climate science to develop technologies that must include pest-surveillance and forewarning systems; simulation modelling and big data analytics, etc. Digital agriculture through use of ICT and emerging technologies could play an important role in helping to adopt various climate-smart interventions. Focus on agricultural research and innovation to ensure efficiency in resources (water; nutrient) use; carbon sequestration; assessment of GHG emissions from agriculture sector, etc., has to be made with enhanced allocation of budgetary support and collaborations/partnerships.

Reduction of GHG emissions from animal agriculture has to be prioritised since livestock is a significant contributor to GHG emissions within agriculture sector (about 60 per cent coming from enteric fermentation). Balanced ration/nutrition for livestock is often suggested to reduce greenhouse gases emissions per unit of animal product. Effective mitigation measures and appropriate adaptation technologies have to be taken to reduce emissions in the entire animal food chain such as land use and land-use change; feed production; animal production; manure management; processing and transport, etc. Manure management practices need to be promoted that would ensure recovery and recycling of nutrients and energy.

India has submitted its NDCs (Nationally Determined Contributions) to the UNFCC as a part of its commitments to Paris Agreement that inter-alia includes adoption of climate friendly practices for a cleaner path of development. Ministry of Agriculture and Farmers’ Welfare has delineated its intended climate actions in the agricultural sector like increasing efficiency in water use; promotion of organic farming; conservation agriculture practices; plantation and agro-forestry, etc. Specific schemes such as Paramparagat Krishi Vikash Yojana; Soil health Card scheme; Neem-coated urea; Pradhan Mantri Krishi Sinchayee Yojana; etc., are aimed to make the agriculture sector more resilient to a changing climate. Few state governments like Andhra Pradesh, Himachal Pradesh, Sikkim, etc., have initiated programs to promote natural and organic farming practices on a large scale. Enhanced solarization (and use of renewable energy) by Indian agriculture is now being seriously prescribed to reduce carbon footprints from the sector.

If we are to achieve the sustainable development goal (SDG) of zero hunger, agriculture and food system must reorient to become sustainable and enhance the agricultural productivity and incomes of smallholder farmers (India has as high as 86 per cent of its farm households coming under small and marginal category owning less than two hectares of arable land) who are most vulnerable to the effects of climate change. Moreover, promotion of consumer awareness on diversity of diets that originates from sustainable agri-food systems has to be a priority in policy agenda. Nutri-cereal and climate-resilient crops such as sorghum and millets are increasingly gaining popularity amongst a growing health and nutrition-conscious population in India and this is a good news. We have to also focus on reducing food wastage to offset emissions and ensure food availability to the needy. Suitable policies and strategies as enumerated above can help sustain growth of Indian agriculture in a scenario of changing climate.

Dr A K Padhee is Director, Country Relations-India of the International Crops Research Institute for the Semi-arid Tropics (ICRISAT) based at New Delhi. Views expressed are his own.

Ensuring Nutrition Security For Women And Children During The Pandemic

The Milk Debate Continues: Diabetics Can Drink Up