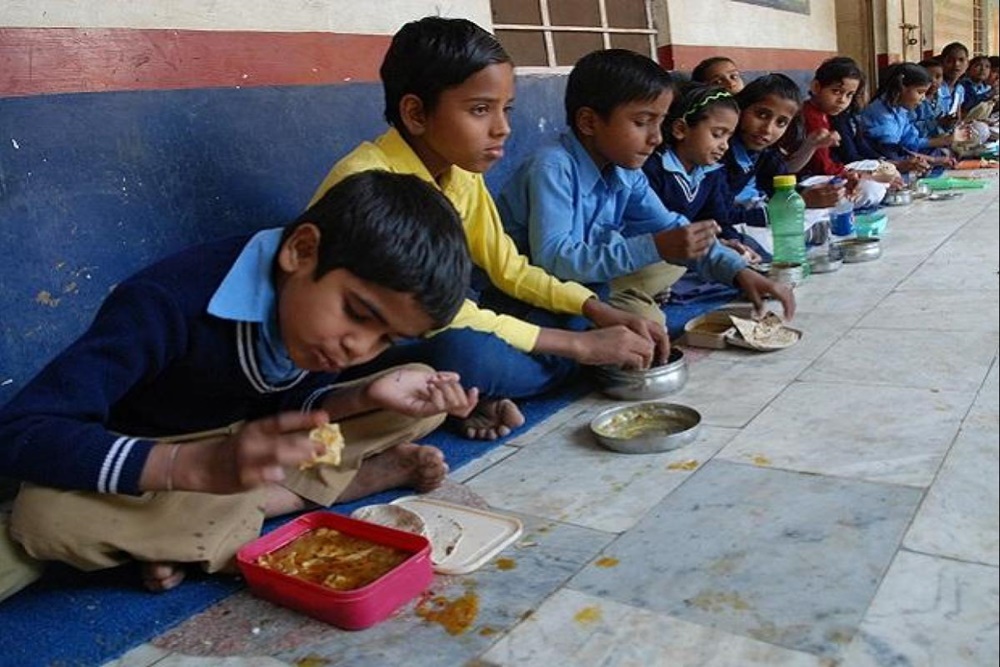 Anganwadi workers, in the context of community support and participation, have played a pivotal role in facilitating child nutrition.

With the success of the green revolution, the focus now shifted to solving the problem of malnutrition.

Child nutrition is of utmost importance in the overall health index of a nation as it directly affects the health and overall development of the present and future generations and the economy. The issue of child nutrition has been addressed in Article 47 in Part-IV of the Constitution of India, which enjoins upon the State to raise the level of nutrition of its people. However, being a Directive Principle of State Policy, its non-implementation or violation cannot be enforced like fundamental rights by the courts in India. Despite the legal impediment on enforceability, many public-spirited citizens knocked on the doors of the Supreme Court, by invoking Articles 21, 32 & 47 of the Constitution of India, which ultimately resulted in the Supreme Court interpreting and recognising the ‘right to food’ with special focus on child nutrition as a part of the right to life guaranteed by Article 21.

Up until the 1970s, newly independent India was busy solving the problem of food scarcity. With the success of the green revolution, the focus now shifted to solving the problem of malnutrition. This also coincided with the gradual transition of the Indian society from a joint family to a nuclear family system, thereby necessitating dependence on external interventions for proper health care, nutrition, and social well-being of the children.

In 2013, the Government enacted the National Food Security Act, 2013 (‘NFSA’), intending to give statutory backing to child nutrition, which was until then lying fragmented in various schemes.

NFSA accelerated food security, brought in various criteria for identifying eligible households, brought about needed reforms in problematic areas like PDS, provided emphasis to women empowerment by identifying women of 18 years and above to be the head of the household for the issue of ration cards, put in place an internal Grievance Redressal Mechanism for every State Government, clearly spelled out obligations of Central Government, State Government and local authorities about food security, etc., and brought in transparency and accountability about records relating to PDS & set up Vigilance Committees, etc. Despite the many benefits that the Act has to offer, effective implementation of the provisions of NFSA continues to be an area of concern.

ANGANWADI WORKERS: LINK BETWEEN THE GOVERNMENT AND THE TARGETED BENEFICIARIES

Anganwadi workers, in the context of community support and participation, have played a pivotal role in facilitating child nutrition. A conjoint reading of sections 3, 4, 5, 6 & 7 of the NFSA, would unerringly point to the fact that effective implementation of the aforementioned provisions of the Act largely depends on the Anganwadis, which are run by Anganwadi workers, etc., who are village level workers/ward level workers and in charge for delivery of the various services envisaged under the Act.

Their daily tasks include taking responsibility for pre-school activities for children in the age group of 3-6 years, arranging supplementary nutritional food for children of age group 6 months to 6 years and expectant and nursing mothers, giving health and nutrition education to mothers, making home visits for educating parents, eliciting community support and participation, assisting the Primary Health Centre Staff in implementation of immunization, among others.

As key facilitators of child nutrition initiatives at the ground level, they are involved in performing the work of dissemination, publicity, building awareness, and implementation of various schemes of the Government. No wonder, the strength of Anganwadi Centres has increased from 8 lakh to 14 lakh in the country.

Anganwadi workers also function as a bridge between the Government and the targeted beneficiaries in delivering a bouquet of services stipulated under the NFSA. They work in proximate quarters with the beneficiaries and their services are utilized by the respective State Governments for a wide range of activities—be it survey, promotion of small savings, providing health care, group insurance, or non-formal education.

However, COVID-19 induced lockdowns led to the closure of Anganwadis in March 2020. This abruptly snapped the delivery of services / takes home rations to targeted beneficiaries.

CLOSURE OF ANGANWADI’s CHALLENGED IN THE SUPREME COURT

A Writ Petition was filed by Ms. Dipika Jagat Ram in the Supreme Court questioning the closure of Anganwadis given the important role played by them under the NFSA Act. The Supreme Court in January 2021 promptly directed all States / UT’s, who have not yet opened, to open their Anganwadis forthwith, in consonance with the advisory issued by the National Human Rights Commission to recognize ICDS as an essential service and re-open Anganwadi Centres.

Several NGOs have since reported that despite the favorable verdict given by the Supreme Court, the beneficiaries under the NFSA are seldom receiving adequate take-home rations and that situation, in general, has not improved much.

The Supreme Court judgment in Deepika Jagat Ram case acknowledges that the Centre and States are statutorily bound to implement the provisions of NFSA. The judgment further quotes section 6 of the NFSA Act, which directs the State Govt to implement the mandatory provisions of NFSA (sections 3 to 6) through the local Anganwadis. In other words, the entire onus of prevention and management of child malnutrition and implementation of various schemes for the realisation of entitlements is placed on the local Anganwadi. It further acknowledges and recognises the important role played by Anganwadi and Anganwadi workers in the delivery of services to target beneficiaries. Yet, the judgment has stopped short of discussing the problems faced by the Anganwadi workers.

First and foremost, they are not holders of civil posts due to which they are deprived of a regular salary and other benefits that are available to employees of the State. Instead of a salary, they get only a paltry ‘honorarium’ (much lower than the minimum wages) on the specious ground that they are part-time voluntary workers, working only for about 4 hours a day.

Other arguments to deny them parity with other employees is that their work is stated to be of community participation and not as an employee, their names were not sponsored from any employment exchange for employment, they are free to contest elections, which is not allowed in the case of employees of the State, in filling up of the posts no advertisement is necessitated, nor is there any requirement to comply with any recruitment rules. Secondly, the nature of work and the working conditions of Anganwadi workers/ helpers are extremely onerous and difficult. This coupled with the lack of job security results in a complete lack of motivation to serve in disadvantaged areas or people and have limited sensitivity towards the delivery of services to such groups.

In 2007, 2008, and 2010, bills relating to regularisation of Anganwadi Workers and for conferring the status of permanent employees of the Government were introduced. However, the Government seemed to lack the will to see it through particularly in light of the additional financial burden of Rs 5000 crores it would have had to incur.

It is disheartening to note that despite more than 70 years having lapsed since independence, the last attempt by the Central Government at ameliorating the lives of these Anganwadi workers was done only in 2010 i.e. more than 11 years ago when the Bill relating to regularisation of Anganwadi workers was introduced in Parliament. The Supreme Court also missed an opportunity to nudge the Government to act in this direction, in its recent judgment in the Dipika Jagat Ram case. Additionally, instead of disposing of the matter in haste, the Supreme Court could have played a more pro-active role in keeping the Writ Petition pending and monitoring the same as it involves the crucial aspects of child nutrition.

From the above, it is discernible that there is a yawning gap in the effective implementation of NFSA. One of the major reasons for the above is the continued neglect of the Anganwadi workers/ helpers in matters of payment, job security, conditions of work, etc. Unless efforts are made to identify and tackle the roadblocks and difficulties implementation of the provisions of NFSA will be adversely affected.

Therefore, in the backdrop of the devastating pandemic, loss of livelihoods, and consequent increase in hunger, effective amendments are required to arm the NFSA with more teeth to ensure efficient last-mile delivery of services especially now when we need them more than others. Unless and until remedial measures are taken the ideals enshrined in the Constitution and statutorily backed by the NFSA will remain largely illusory.