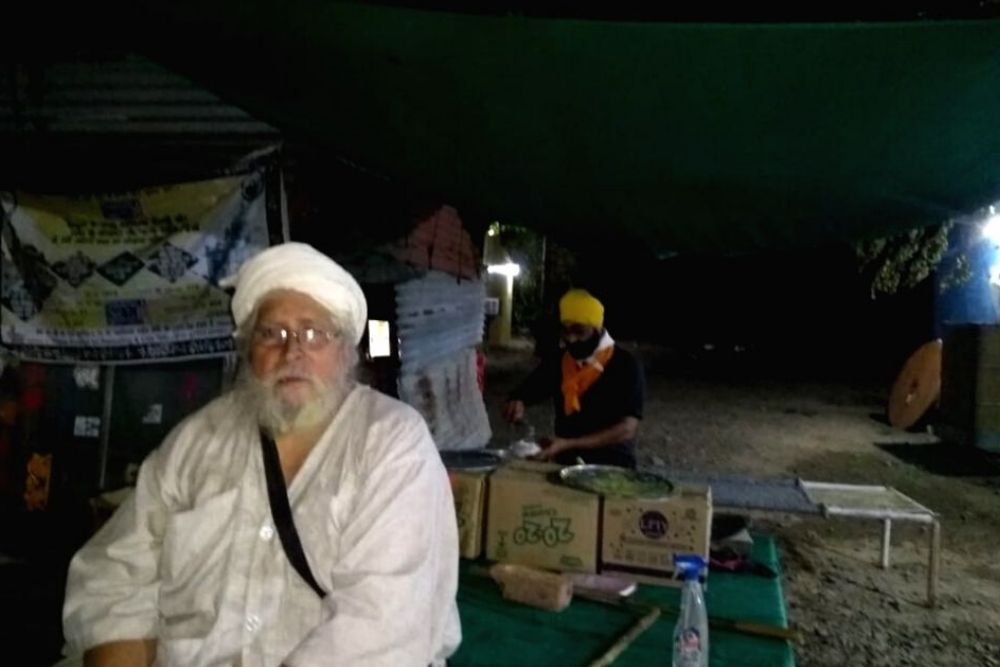 Meet Baba Karnail Singh Khaira, head of the Dera Kar Seva Gurudwara Langar Sahib, on a remote stretch of a Maharashtra highway. Since the lockdown began, it has fed over 15 lakh people, mostly poor migrants returning home, for free.

Since the past over two months of lockdown, thousands of bus, trucks, tempos and other vehicles passing near Karanji on National Highway-7 make it a point to halt at a ramshackle tin shed with plastic sheets, beside the dry and dusty road.

This is the only spot on a stretch of around 450 kms where a decent meal is available - free of cost - courtesy the services of Baba Karnail Singh Khaira, who is revered as Khaira Babaji in the region.

"This is a remote, tribal region. Behind us for nearly 150-km, and ahead for nearly 300 km, there's not a single dhaba or restaurant... So most people prefer to halt at 'Guru ka langar' and avail of our round-the-clock services," Khaira Babaji told IANS.

A simple ochre-colour board indicates 'Gurudwara Sahib', and 'Dera Kar Seva Gurudwara Langar Sahib', this tiny 'Guru ka langar' is linked with the historic Gurudwara Bhagod Sahib, Wai, located around 11 km away in a forested area, visited mostly by Sikhs.

It was the spot where the 10th Sikh Guru, Guru Gobind Singh had stayed in 1705, while en route to Nanded, some 250 km away, where he was assassinated on October 7, 1708. Nearly 125 years later, it bloomed as the world-famous 'Gurudwara Takht Hazuri Sahib Sachkhand' (Nanded), one of the Five Takhts in Sikhism.

"Since the Gurudwara Bhagod Sahib is away from the main road, in 1988 (32 years ago), this free 'langar' came up here as its branch. I was assigned to manage it with the blessings and guidance of Nanded Gurudwara Sahib's Baba Narinder Singhji and Baba Balwinder Singhji," said Khaira Baba.

A regular 'langar' for years, it was only from the March 24 lockdown that it became a saviour for thousands of hungry people including stranded migrants, travellers, truckers and villagers.

"We had hordes of people coming daily and we kept continuously cooking food for them... We welcomed all with smiles and folded hands, irrespective of caste, religion... My regular team of 17 'sevaks', including 11 cooks and other helpers were overworked, but ensured a non-stop supply of fresh, piping hot food," Khaira Baba said.

The services include breakfast of tea with hard bread or biscuits, and all meals are plain rice with tuvar dal, aloo-vadi and aloo vanga, and providing soap and borewell water for bathing to the weary visitors.

Based on the number of disposable plates in which the crowds were served, Khaira Baba was himself astounded to learn that more than 15 lakh people were fed in the past 10 weeks, plus more than five lakhs took away parcels from the 'langar', and still counting.

Another unique aspect here is feeding chapati-jaggery daily to around 250 dogs, plus cats, stray cattle and other mute animals in the vicinity grappling with a hunger crisis in lockdown.

"I was born in Meerut (Uttar Pradesh), but left home at the age of 11 to answer 'a mysterious call for service to humankind', as a kid, I helped build a bridge on River Godavari here...," he
said, offering a peek into his background.

Later, he lived in the Middle-East countries for around four years and spent another five years in Germany and other European countries organising funds for Gurudwara 'langars' and other services.

"Though illiterate, I speak fluent English, Hindi, Punjabi, Arabic, Dutch and German, besides of course, Marathi," Khaira Baba smiled with a tinge of pride.

When asked what motivates him to sit in the blazing sun with barely anybody to even talk with, Khaira Baba points at the sky and says: "It's the 'marzi' (will) of Wahe Guru... We are only his instruments in the service to humanity. See, three vehicles are donated by devotees to this 'langar'...but my only belongings on earth are the three sets of clothes, I live and sleep here, eat
the same food served to the people," he said softly.

The 'Guru ka langar' has kept two donation boxes outside in which people offer as per their desire and capacity, but it is never counted and the money is again ploughed back into the 'langar'.

Saturday was a big day when Khaira Baba personally served 'sherbet' to all the people as part of the month-long ceremonies to mark the 414th anniversary of martyrdom of Guru Arjan Dev, the Fifth Sikh Guru, on May 30, 1606.