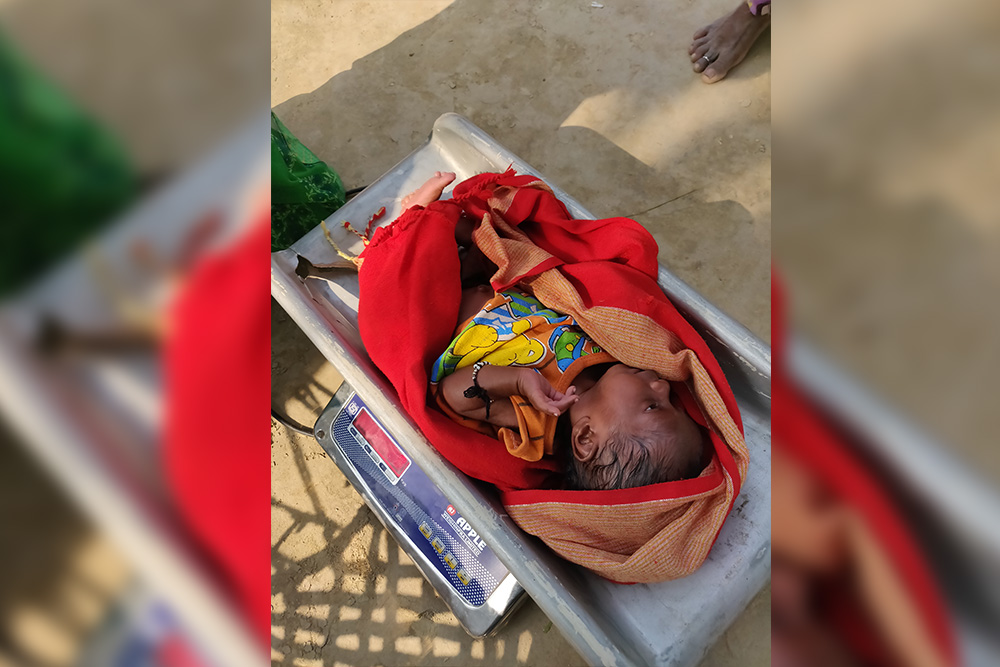 Varanasi is home to an estimated 700 children suffering from Severe Acute Malnutrition (SAM), along with about 1,500 with Moderate Acute Malnourishment (MAM), according to the district administration records.

In the middle of March 2019, the 11 beds at the Nutritional Rehabilitation Centre (NRC) in the Deen Dayal Upadhyay Government hospital in Varanasi lay empty. The well-maintained hospital floor with state-of-the art facilities, including trained nutritionists, medication and a separate kitchen and playing area for children, saw just one child admitted through the month.

Children suffering from SAM are visibly weak, have very low weight and height for their age and show severe signs of muscle wasting. Varanasi is home to an estimated 700 SAM children along with about 1,500 suffering from Moderate Acute Malnourishment (MAM), according to the district administration records, and yet, the NRC, the premium facility for the treatment of the condition, remained empty. 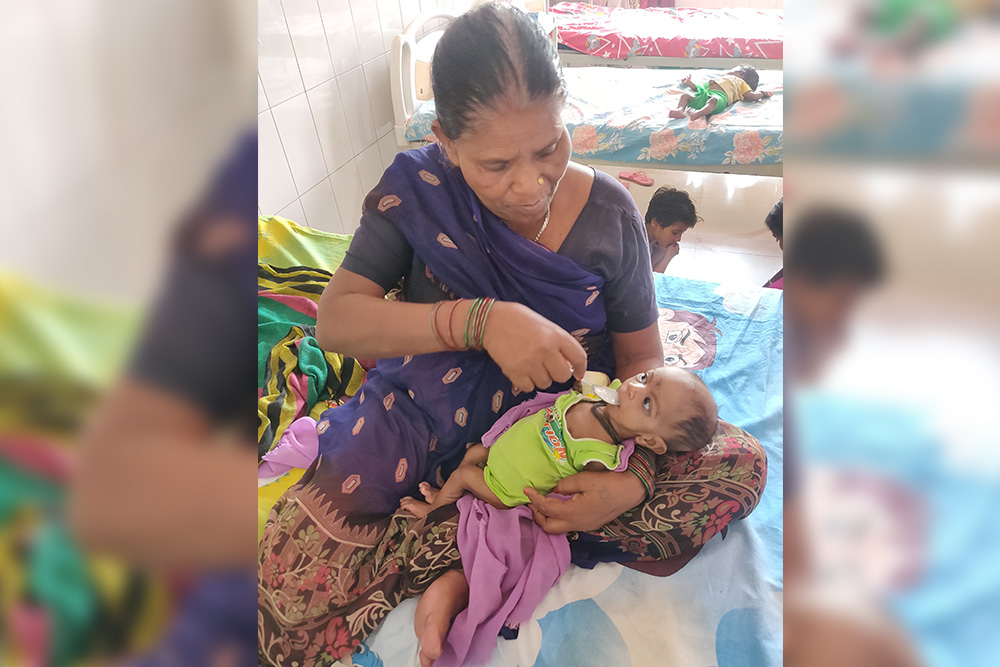 This is the problem that plagues almost all of Uttar Pradesh today. Typically, about 10% of all undernourished children can be classified as SAM. The National Family Health Survey-4 conducted in 2015 shows that 39.5% of all children below 5 years of age are underweight, while 46% children are stunted. District records in Varanasi show there are 4,992 undernourished children in the district.

As a Swasth Bharat Prerak under The Indian Nutrition Initiative of Tata Trusts, I was plagued with this problem since my arrival in Varanasi. While the number of children at the NRC did rise every now and then, the reasons had more to do with intermittent pressure from higher level officials rather than a conclusive, self sustaining model.

And yet, on every visit to an Anganwadi centre, it was apparent there were children who needed dire medical attention. A 3-month old baby, born in a Musahar basti in Shivpurva, weighed only about 2.5 kilos when the team from Varanasi’s integrated Child Development Services (ICDS) department which works on implementing the Poshan Abhiyaan went to visit. A healthy child her age weighs at least 5 kg. The baby’s father, a vegetable seller, earns Rs 5,000 a month and is often stretched to provide his family of six with the resources required in cases of medical emergencies. What was more concerning was that the Anganwadi worker in the area too was not sure about how to treat the baby’s problem. 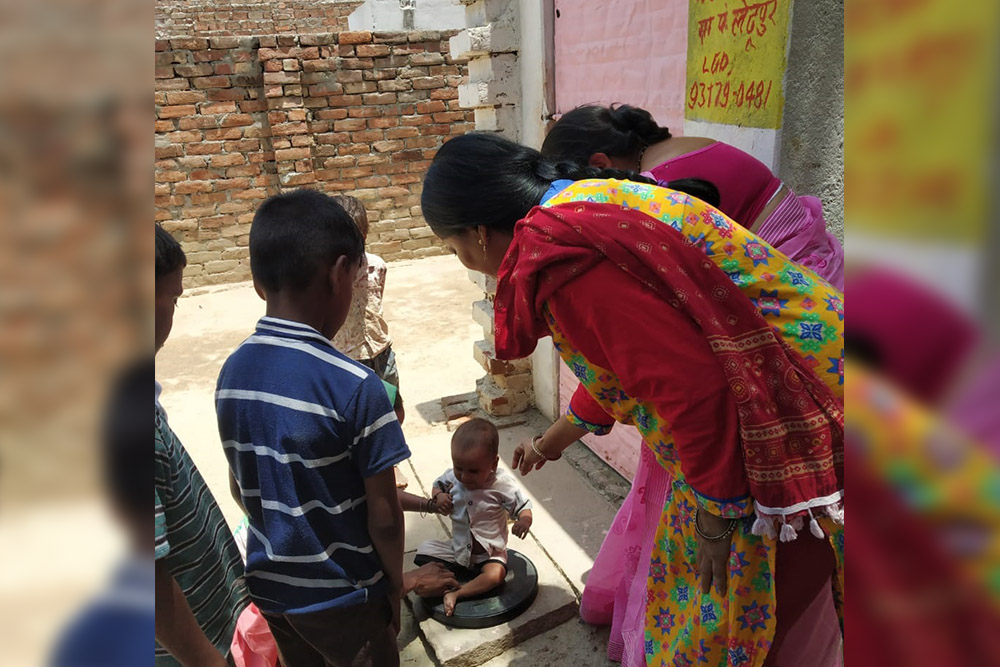 After talking to other such parents and Anganwadi workers along with Accredited Social Health Activists (ASHA) and Auxiliary Nurse Midwives (ANM) in the area, we realised that such children were not being identified correctly because of two big problems. First, there was no clear demarcation of responsibilities of different departments, such as health, ICDS, MGNREGA etc within the chain of command to identify and treat children. Secondly, there was a serious lack of knowledge amongst all ground level workers about what qualifies a child for being admitted into the hospital.

The lack of a clear process for the identification of malnourished children made us realise that in order to increase the number of admissions, we not only had to define the roles for each department and field functionary but also create a database of already existing SAM children in the area. Creating this database meant making the already burdened AWW, ANMs and ASHAs dedicate time to bring all underweight children to a common place and screen them for SAM markers. For months, this proved to be unachievable.

A breakthrough solution was finally found in March this year, when during another meeting with the District Program Officer of the ICDS, we were discussing how to best use our resources towards identification. It was then pointed out that the upcoming week-long polio drive in the district could prove beneficial. The Pulse Polio Programme mandates that all children below the age of 5 years are given polio drops through door-to-door visits by field functionaries of the Health and ICDS department. This essentially meant that the beneficiaries as well as government stakeholders for both the polio round and the identification of SAM children were the same.

A few quick meetings with the Health department before the polio round helped formulate the plan better. Over the next week, Varanasi’s 3,914 Anganwadi workers, 302 ANMs and 2,368 ASHA workers went door to door weighing and calculating the Mid Upper Arm Circumference (one of the most widely used tools to identify SAM children) while conducting the polio drive for all children below 5 years of age.

In a week, the names and details of all SAM children were available at the district office, but that was far from enough to fill the NRCs. Another main reason for the low attendance at the NRC was the fact that all children need to be admitted for a period of 14 days along with a parent, preferably the mother. This is done so that parents are taught the strict nutrition regime for children to show an improvement.

The 14-day stay also meant that parents could neither go back home to take care of the rest of the family nor go to their day jobs, often their only source of revenue. Thus, along with identifying children, it was also equally important to conduct one on one counselling with their parents to ensure that they stay at the hospital for the period required.

While the government has measures in place, such as providing the family of SAM children with a job card and a ration card to ensure that they receive both ration and a minimum wage during the time, the lack of proper identification of SAM children had proven to be a challenge.

The identification of the children enabled all the other departments too to provide such facilities. The next step was to counsel the parents about the issues around severe malnutrition and the need for spending the required time. I, with the help of the block coordinators and lady supervisors, developed a time table for rigorous counselling, especially within Varanasi City, which had ten times the number of SAM children as compared to the other blocks. This included not only explaining the benefits of the facility through previous examples but also by providing the infrastructure for the parents to take the child to the hospital. This was also helped by the Rashtriya Bal Swathya Karyakram (RBSK) team which helps screen SAM children.

In a month after the polio round, the number of children at the NRC rose by 50%, while in May the number rose by another 60%. The NRC saw 24 patients in May as compared to 2 children in March. This number is only expected to rise further since the hospital has now developed a waiting list for children from every block. Parents and the RBSK team are informed of any child being discharged so that they can bring their child for admission.

The biggest change though has come among the parents of the children themselves. The whole process has made them trust government services more, a task that often proves to be next to impossible.

(Arushi Bedi is a Swasth Bharat Prerak from Tata Trusts in Varanasi and works on implementing and evaluating the National Nutrition Mission with the district administration).