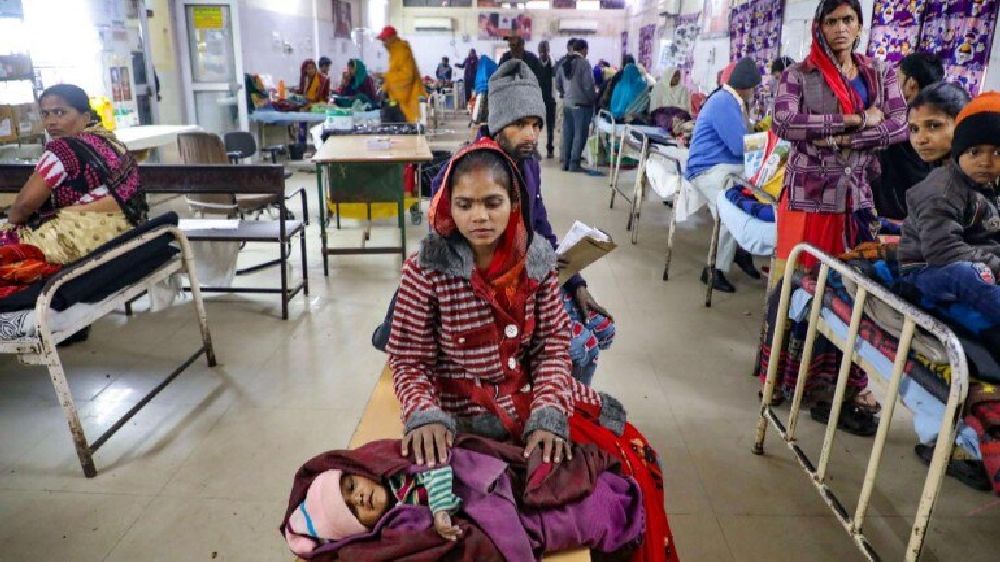 India ranked 47 in the list of 225 countries with the greatest number of infant mortality cases, according to the Central Intelligence Agency’s (CIA) 2017 estimates.

Infant Mortality Rate (IMR), the probability of an infant dying before reaching the age of one, is often used as an indicator of a country’s health and development. It sheds light on the availability and quality of health services, poverty, and socioeconomic status, and well-being of children and families across the globe. High infant mortality rates are generally indicative of unmet human health needs in sanitation, medical care, nutrition, and education.

Even though preserving the lives of new-borns has been a long-standing issue in public health, social policy, and humanitarian endeavours, infant mortality is once again on a global rise even after a slow decline. An exploration and determination of key data and metrics can shed more light on this trend and its drivers.

GLOBAL IMR VS. INDIA – A COMPARISON

The UN Inter-agency Group for Child Mortality Estimation (IGME) applies a common estimation method across all countries in the interest of comparability to tackle this problem. This method was designed to estimate a smooth trend curve of age-specific mortality rates, accounting for potential outliers and biases in data sources and averaging over the possibly many disparate data sources for a country, which can include household surveys, censuses, and vital registration data. Figure 2 represents the UN IGME’s broad strategy to arrive at annual estimates.

A DEEP DIVE ON INDIAN DEMOGRAPHY

From a global perspective, India ranked 47 in the list of 225 countries with the greatest number of infant mortality cases, according to the Central Intelligence Agency’s (CIA) 2017 estimates. Iraq, Kenya, Zimbabwe, Bangladesh, etc., had better survival conditions for infants.

But even in the Indian demographic, the states and union territories show a startling difference in their IMRs (Fig. 4). 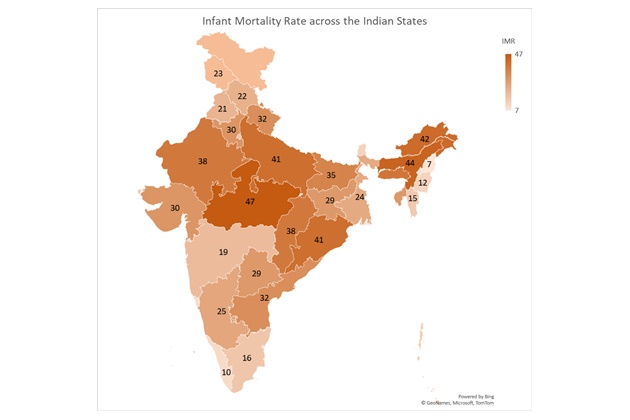 UNDERSTANDING THE DIFFERENCE IN IMR BETWEEN INDIAN STATES

We believe a universe of underlying factors drive this variance and finetuned a selection for closer study. We understood their individual relationship with IMR by calculating their correlations.

After studying individual correlations, the most significant were-

We ultimately drew from a combination of three variables – Literacy Rate and Birth Rate after running a multivariate regression using step wise selection tool of IMR with all these highly correlated variables.

Improving literacy rate and decreasing birth rate by 10% can result in a better dynamic for the Indian IMR rate with a potential 45% improvement according to our model (Fig. 7).

CAUSE AND EFFECT OF TOP TWO VARIABLES?

We can see infant deaths are symptomatic of deeper social problems such as educational disparity, rather than just medical aspects.

India has recorded a significant fall in the infant mortality rate in the last five years and may improve the situation further by tackling these longstanding social issues. Further reduction in India’s child mortality rate calls for new approaches to the problem of child mortality.

One solution could be taking a holistic approach to address the combined need for education (such as universal primary education and access to basic maternal and infant health services).

Apart from implementing concrete policies to provide education to all, there is also a need to introduce important topics in the curriculum such as contraceptives, sex education, and family planning. While it is established that a literate person is better positioned to make educated decisions on behalf of their infant, the introduction of such new topics could make important concepts related to fertility and maintaining a stable birth rate more accessible.

This research is just the beginning of an exploration of a deeply entrenched and multifaceted problem. Understanding IMR risk factors and how they vary by region and state is a crucial first step for policymakers or other non-government decision-makers. Stratified health policies that consider the measurable key facets discussed in this article and state-specific epidemiological and demographic patterns could be a doorway to a healthier India and a healthier world.

(Anoushka Khanna is an analyst at FischerJordan and Neet Shah is a partner at FischerJordan, a consulting firm that combines Strategy, Analytics and Technology practices within a single cross-disciplinary unit )