A game of ice hockey featuring a legendary Russian who has an asteroid named after him brings into focus the whimsies of the climate that is eating away at Ladakh's landscape
Jayanta Oinam | Jan 29, 2020 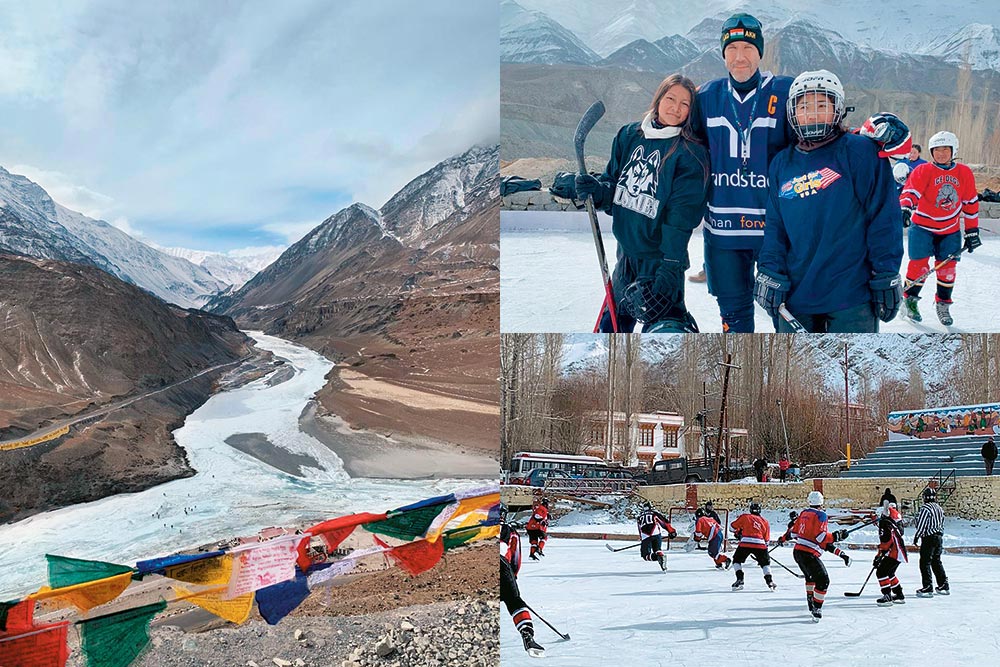 Happening on it abruptly, it seems to be a rich lick of cream appetisingly rolling on a dark crust. Till one takes in the shockingly blue firmament and the torn edges of surrounding mountains—a glacier lying in the sharpest of contrasts to its rocky underpinning. A glacier, moreover, in calamitous withdrawal. A plaque called ‘A letter to the future’, erected in August 2019, takes disheartening stock: “It is the first islandic glacier to lose its status as a glacier. In the next 200 years all our glaciers are expected to follow suit. This monument is to acknowledge that we know what is happening and what needs to be done. Only you know if we did it.”

On a windy January morning, Leh played host to a game of ice hockey featuring a motley group of stick-wielders—a legend of the game from Russia, CEO of a staffing company, volunteers from all over the world and members of both the Indian men’s and women’s national teams. Called ‘The Last Game,’ the match was more than a friendly exercise. It was a call to join humanity’s fight to save the planet.

That very day, the World Economic Forum shared its Global Risks Report 2020, with an alarm: “For the first time in the survey’s 10-year outlook, the top five global risks in terms of likelihood are all environmental”. The report, Burning Planet: Climate Fires and Political Flame Wars Rage, painted a far grimmer picture than what the ice hockey players in Ladakh had tried to indicate with its dooms­day moniker. For those who had gathered at the unfinished NDS Sports Complex on January 15, the game was not over. The fight had to involve future generations; only they know if ‘we did it’.

Eight weeks before that Wednesday, Paul Dupuis (MD & CEO of Randstad India) got a call from a friend in Singapore telling him that Viacheslav ‘Slava’ Fetisov was committed to playing The Last Game in Leh. Dupuis, a globetrotting Canadian now based in Bangalore, grew up watching Slava in action. He seized the moment. Then, the 51-year-old gave a call to action. Dupuis narrates how he drew people into the ‘game’: “Well, climate change, India, Himalayas—who’s the best person we need to talk to? Sonam Wangchuk.” They had met before. “My experience with hockey shows it builds con­n­ec­tions, and those result in movements,” he tells Outlook, about the swelling band of players.

Wangchuk, the winner of the Ramon Magsaysay Award in 2018, was more than happy to “collaborate and partner with all like-minded people”. He hosted the team on the Students’ Educational and Cultural Movement of Ladakh (SECMOL) campus, which he helped build in 1988 to “make education more relevant”.

Known for his reforms in education, the engineer from Alchi, a small village on the banks of the Indus, found the event “very interesting—a platform where sports was used to bring young people together, towards an awareness and thereby action.” According to the 53-year-old, “it was also even more meaningful because ice hockey is big in Ladakh—its hub in South Asia. So, fusing ice hockey with climate change…it couldn’t be better than that.”

The biggest draw was Slava, the legendary Russian ice hockey star who, fittingly, has an asteroid named after him. Now, the 61-year-old is making The Last Game become a global event for the United Nations Environment Programme (UNEP). He emphasises the importance of having people from “different countries, different backgrounds, and different teams”, as “we all love our planet and want to save it”.

“Climate change is affecting every aspect of our being. We’ve got to figure out a solution quickly…and hockey is a leader in promoting UN Sustainable Development Goals. The Last Game is for everyone. Only working together, as a team, can we win,” the two-time Olympic gold medallist and seven-time world champion tells Outlook.

Home to some of the most sensitive ecosystems, mountains are affected by climate change at a faster rate. The Himalayas is ground zero of life-sapping cha­nge, with firsthand, urgent acco­unts coming from Ladakhis. In fact, its very identity is imperil­led. Less snowfall and heavy rainfall contribute to erratic climatic conditions, directly affecting livelihoods—from being driven to forsake eco-friendly, traditional mud structures to being forced to change cultivating crops of choice. Even paintings and carvings in Buddhist monasteries bear the brunt of climate change.

According to a UNESCO report, nearly 40 per cent of the world’s population depends directly or indirectly on mountain resources for water supply, agriculture, hydroelectricity and biodiversity. And in the Indo-Gangetic plain, home to over 400 million people, that source is the Himalayas, with Ladakh playing an imp­ortant role in its health.

“We used to have these makeshift skates when I was a kid; we used to skate on this long stretch of frozen streams in our village. Now, I hardly see any ice there—the most drastic change I have seen,” says N.A. Gyapo, president of Ladakh Winter Sports Club. A popular figure in ice hockey circles in India, Gyapo, 58, is nonetheless hopeful of the future. “People are much more aware of climate change, especially the youth, and are more conscious of their choices.” 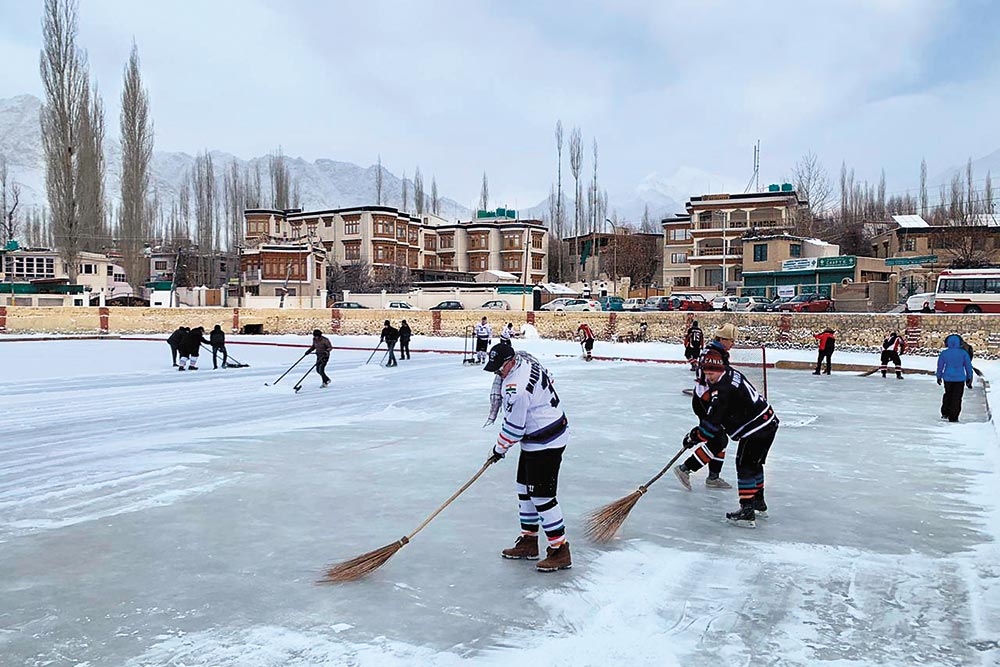 The rink takes looking after, just like Ladakh’s fragile eco-system.

Ladakh is at dangerous crossroads; the newly-minted Union Territory—a spa­rsely populated mountainous region—is likely to face greater challenges in every aspect of its survival. Nature, it seems, is working in a vicious cycle, a punishing pincer attack: if flash floods are becoming frequenter because of melting glaciers, droughts appear close on its heels as less water is likely to be available.

“We are happy we are no longer subject to the Jammu and Kashmir government, but are now being told that we have no protection whatsoever. If it’s a free-for-all, open to plunder—to the boots of hundreds of thousands of tourists, or the probing digs for the hunt for natural res­ources—it would be out of the frying pan into the fire,” Wangchuk warns.

His clarion call echoes those of other climate activists—at a time when necessity drives mankind to push the earth tow­ards destruction, what we need is more than words. A better time to draw attention to the fact that the fiery tongue has crept up to our doorsteps never exi­sted. And a game of ice hockey at one of the most fragile ecosystems on the planet might well have played its role, however insignificant it sounds. Of course, a one-off event will not help the cause.

“The Last Game is an amazing event, and when it’s done, it’s done. I believe doing something once is okay, but continuity, scalability, and sustainability is the key. So, when we finished The Last Game, I sat down with some of the locals and leaders. I met the lieutenant governor, Radha Krishna Mathur, and we discussed how we can help Ladakh. I plan to go back to Leh in the next couple of months to meet local tourism officials, along with people like Gyapo, to discuss how we can help,” Dupuis pledges.

Elsewhere in Davos, in the Swiss Alps, over the course of the last week, the world’s business and political leaders del­iberated on how to address the climate crisis. Typically, nothing tangible came out, despite climate change being the key theme.

“We will be destroyed by climate change, not the planet. This will be for us a clear indication that we absolutely need to change course.... Humankind has declared a war on nature and nat­ure is striking back in a very violent way,” UN secretary-general Antonio Guterres said rather dejectedly.

In Ladakh, those who were part of The Last Game unanimously echoed Wang­chuk’s #ilivesimply movement’s slogan: please “live simply, so that we in the mountains may simply live”. The movement was launched by SECMOL and HIAL (Himalayan Institute of Altern­atives, Ladakh) on the 150th birth anniversary of Mahatma Gandhi last year. As always, in a moment of crisis, it’s to him we turn for light.

By Jayanta Oinam in Leh