Home Story OPINION | 'The Current Of Destruction Is Strong, Even The Ganga Has Not Been Spared For Political Gains'

OPINION | 'The Current Of Destruction Is Strong, Even The Ganga Has Not Been Spared For Political Gains'

Siddharth Agarwal, who walks along rivers across India, feels the common man is being left in the lurch as urban desires will not solve the core issues confronting the rivers of India
Siddharth Agarwal | Jul 25, 2019 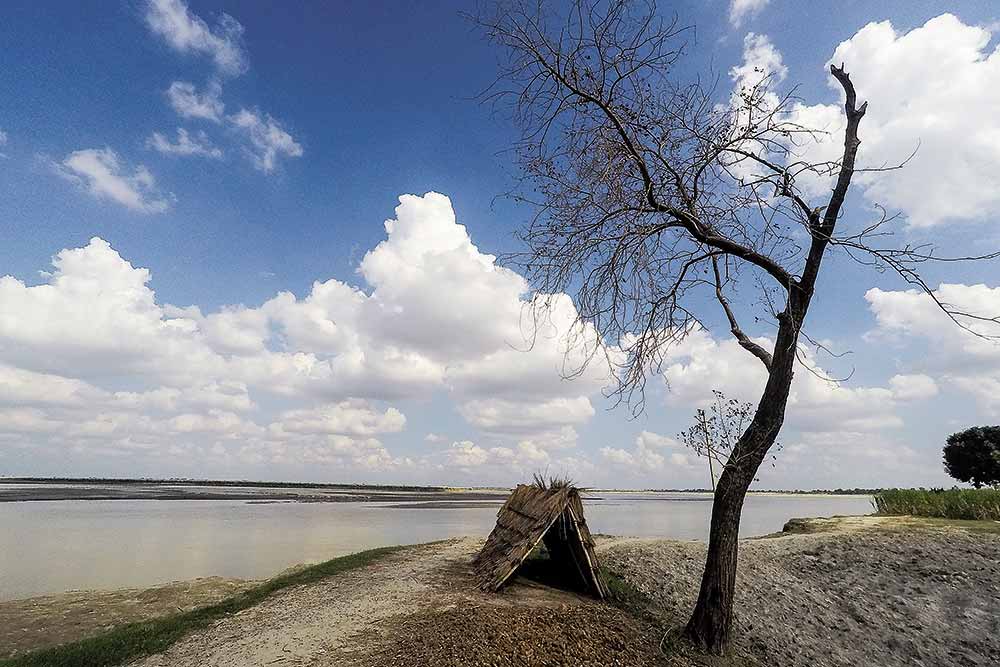 The summer sun in Bundelkhand is unrelenting, especially if you’re making your way across the prickly dry landscape on foot. At the outskirts of a village on the banks of the Ken, my companion and I stopped at a mud house on a large mound, ­exhausted and hoping to find some food and shelter. Our ­request for water confused the host. Did we want to drink at the home of a lower-caste person? We had a few gulps of river water she had stored and proceeded to the village.

At the anganwadi centre, we sat on threaded cots under the shade of a magnificent neem tree. Bands of men were smoking and playing cards on the patio, but there were no children or anganwadi workers in sight. A young boy volunteered to take responsibility for our food and pooled items from many houses to assemble a sumptuous meal. Amongst offers for more rotis and tobacco, a discussion ensued.

“There’s a dam to be made on the Ken? They are planning to divert water from the river to Betwa? Will they not leave water downstream at all? It’ll probably help control floods that devastate our villages…What we want is for a canal to go through our fields…Us fisherfolk will not get fish anymore…” The residents had plenty of questions and observations. Most had no clue that an endeavour costing over Rs 10,000 crore—the Ken-Betwa linking project—had been proposed on their river, that too to divert water to another basin. It would entail an unprecedented transformation of the landscape. Those (barely) aware were conjuring hypotheses similar to those who had just learnt about it from us. Basically, they knew little. We were accidental messengers doing the job of the state. After walking through scores of villages along the Ken, we realised that partial awareness and misinformation were the norm.

The state seemed to be taking advantage of this situation. In the past few years, the Centre has issued unfounded statements to the media regarding clearances for the project. In 2017, the NGT admitted a plea seeking a stay on the project on the grounds that there was no environmental impact assessment and public consultation, and sought the Centre’s response.

While India is witnessing the effects of climate change, the government is pushing for river-­linking projects that will lead to the submergence of millions of trees in old-growth forests like the Panna Tiger Reserve. The reserve, home to India’s national animal, is situated in Bundelkhand, part of the Ganga basin.

While elections are being fought on the promise of reviving the Ganga, the constant degradation of the river’s catchment and continued damming of its tributaries do not inspire confidence. The Namami Gange programme of the central government mentions ‘nirmal dhara’ (clean flow) and ‘aviral dhara’ (ecological flow) as primary goals. However, the government continues to push for massive hydro­power and river-linking projects, which are harmful to rivers. One look at the current scheme of things makes it amply clear that the inclination is towards large-scale projects and grand ­announcements, which offer political rather than ecological gains.

Another such project is National Inland ­Waterways, which seeks to convert 111 river stretches in India into commercial navigable routes. Of this, the section of the Ganga between Varanasi and Haldia is designated as National Waterway 1 (NW1). Its design has changed from a barrage every 100 km on a 1,600-km stretch of the river to three multi-modal terminals in that section. In 2016, before this modification happened, I sat with farmers and fisherfolk on the banks of the Ganga in Bengal, Bihar and Uttar Pradesh to gauge their reactions to the project. Walking along the river allowed for intimate interactions at various places and I gained a comprehensive perspective.

“They will run barges? But the river doesn’t have enough depth…Barrages here? Will our fields get flooded? Maybe water will be available to us year round…They don’t give us ­advance warning for the ships. We have ­already lost fishing nets worth thousands of ­rupees. Some of our boats capsized…”

Residents in Bengal talked of an increase in ships transporting coal. There were allegations regarding the exclusion of the riparian community from discussions about these developments. Authorities had not introduced warning systems for the safety of fisherfolk, their boats and nets. River banks were eroding at a pace not witnessed before in local memory. The Farakka Barrage and the increase in coal barges had transformed the landscape.

In stretches of the Ganga upstream of Farakka, residents had witnessed the test runs of barges. They talked about multiple tug boats having to pull barges out of shallow channels of the river, but were unaware that the NW1 was being set up. We sat together, drawing maps in the mud to discuss what had been proposed. It was a revelation to them.

Around the Vikramshila Gangetic Dolphin Sanctuary in Bihar, one of the most crucial habitats of India’s endangered river dolphin, locals knew of the waterway plans, but were apprehensive about the impact of dredging (required for large barges to ply in shallow waters) on the riverine ecosystem.

This trend of partial information and misinformation was prevalent in Uttar Pradesh as well. At many places, local boats had turned turtle when large barges passed by. People had been asked to relocate due to the submergence of land to build barrages and were promised land far from their farms. Thankfully, the change in design of the project has negated the need for relocation. But the biodiversity at the Turtle Wildlife Sanctuary in Varanasi has not been as fortunate. Mired in troubles for long, the sanctuary was eventually denotified in 2018, allegedly to legally accommodate the NW1 multi-modal terminal at Varanasi.

These have led to environmental ­destruction and the migration of fisherfolk. The ministry of environment forests and climate change (MoEFCC) has been lately pushing for doing away with environmental clearances required under the environmental impact assessment ­notification 2006 for dredging in waterways projects on the Ganga. This is in direct conflict with suggestions made by the expert committee of the MoEFCC itself, and the general mandate of the ministry to protect the environment and not provide fast clearances. How does this add up to the pomp and show of the Namami Gange programme, which seeks to rejuvenate the river?

We continue to buy into announcements of large programmes and schemes, and hope for change in what otherwise seems like a lost cause. Five years ago, when the rhetoric about Namami Gange flourished, even pessismists pitched in with hope. But the government’s actions have invariably disappointed. Five years is a short span for a turnaround, but definitely enough to present intent. While the work on sewage treatment plants and expanding urban sewage networks is important, it is not an end in itself. ‘Beautification’ programmes and riverfront development will not solve the core issues that ail our rivers—the ­absence of natural flow, the freedom to envelope floodplains and a healthy catchment.

We treat our rivers merely as a commodity, sucking them dry with our urban desires, relocating them at will for our benefit and tying them behind walls that myths proclaim can only be God’s doing. Legend has it the Ganga once gushed with such force that, without Shiva’s intercession, her descent to earth could wipe out the entire planet. Today, about 940 dams, barrages and weirs constrain her and her tributaries’ flow and many stretches are ecologically dead. As rivers are being continuously sliced and dredged, people along their banks wonder: will they ever be consulted—or even informed?