Centre’s proposals for single-point solutions to state subjects raise the Opposition’s hecklesThe BJP-led NDA government's plan to link ration cards with Aadhaar cards has raised a stink. In any case, food is a state subject and why is the Centre usurping that, asks the Opposition
Preetha Nair | Aug 07, 2019 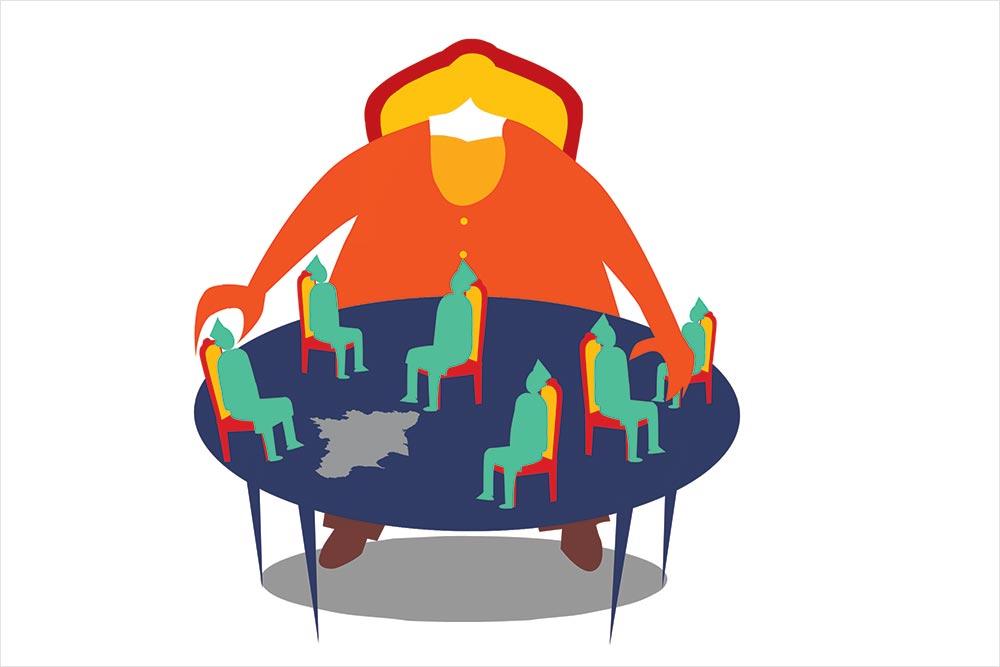 For Sabari, a 47-year-old Bhil tribal woman from Dahod in eastern Gujarat, her workplace for many years has been Ahm­edabad. A daily wage earner, she earns a meagre Rs 150 a day, struggling to sustain her five-member family. What she misses is the subsidised ration she is entitled to; back home, she just needs to visit the nearest fair price shop (FPS) with her ration card for her quota of wheat and rice. So, when the Centre ann­ounced a ‘one nation, one ration card’ scheme, Sabari was among millions of mig­rant workers who were delighted. The government says the scheme, proposed to be rolled out across India by June 2020, will enable poor people such as Sabari to enjoy the benefits of the national food security act anywhere in the country with a digitalised ration card linked to her Aadhaar number.

The scheme is, however, being seen by many—especially the political Opposition of the ruling BJP-led National Democratic Alliance (NDA)—as yet another attempt by the Centre to all­egedly tinker with the country’s federal structure, essentially by enc­­r­­oaching on and usurping state subjects. The proposal for simultaneous elections to the Lok Sabha and state assemblies, and the Union cabinet’s nod to a single tribunal for all water-related disputes among states are also seen in the same light by critics of the government. “Clearly, it’s an attack on the federal character of the country. Why would the central government infringe on state matters?” questions Kanimozhi, a DMK lawmaker from Tamil Nadu.

Not all are enthused by the one nation, one ration card scheme. Shani, another migrant worker, sees the Aadhaar bio­metrics as a hindrance. “My Aadhaar linkage is done, but biometrics doesn’t happen. So I don’t get ration. The government should give us ration by the card. Why do we need biometrics?” she says, speaking to Outlook on the phone through Sejal Dand, a right to food campaigner in Dahod. Then there are others, like former planning commission member N.C. Saxena who approves of the scheme and says that states cannot discriminate against migrants. “There should be a mechanism not to burden the states. Some sort of incentives has to be created,” he says.

The government cites the “success” of the Gujarat model of the Integrated Management of PDS (IMPDS) system, which enables beneficiaries to avail their share of foodgrain from any district in the state. Some other states have a similar scheme in place—Andhra Pradesh, Haryana, Jharkhand, Karn­ataka, Kerala, Maharashtra, Rajasthan, Telangana and Tripura. “If the government is going to ride on the portability of Aad­haar in Gujarat, then the track record of impl­ementation of Aadhaar and getting ration card is quite poor. The government needs to first sort that out,” says Dand, who has been working with migrant workers in the state for many years. She adds that the lacuna in the existing system has to be addressed before jumping into a ‘single card’ scheme. From poor internet connectivity to technological glitches and failure in authentication, migrant workers face innumerable hurdles in accessing the welfare schemes, she says.

Though the exact number of mig­rant workers within India is hard to collate—many people are seasonal mig­rants—the 2011 census showed that an estimated 450 million people, or 37 per cent of the total population of India, are migrants. According to government data presented in Parliament, more than 800 million people are beneficiaries under the national food security act.

“There are (also) millions of problems. They have to be listed one after another. The government has to figure out how the PDS is going to work, how quota is given, and how to collect data. And how will you meet one state’s quota with another? Everything is a hurdle,” says Nikhil Dey of the National Campaign for People’s Right to Information. The scheme has drawn sharp criticism from states like Tamil Nadu and Kerala. DMK leader M.K. Stalin has warned that its implementation will lead to the collapse of the PDS in his state.

Similar concerns have been raised over the idea of ‘one nation, one poll’ idea, raised in the Lok Sabha last month. While cost-cutting has been cited as a reason for simultaneous polls, experts believe that the move doesn’t augur well for democracy. Arguing that unity is not uniformity, political scientist Prof Balveer Arora says that India is a multi-level federal system and the one-poll proposal is impractical. “I don’t buy the argument on cost-cutting. If you have to defend democracy, you have to bear the cost,” says Arora, chairman of the Centre for Multilevel Federalism, Institute of Social Sciences. “The proposition that all states can be made to elect governments simultaneously is not tenable and certainly not practical. It’s against the Constitution. Each state has different problems and they vote differently,” he adds.

While Prime Minister Narendra Modi pitched “simultaneous polls” as an electoral reform, the Opposition has called it a move to crush federalism and a blow to the principles of plurality. Former chief election commissioner S.Y. Quraishi says that though the exercise will ease the burden on the EC, the move needs constitutional amendment. “We are a parliamentary democracy. Simultaneous election is like presidential election. So Opposition parties fear that federalism will be diluted. They will also be subsumed by the grandeur campaign by the prime ministerial candidates in such an election,” says the former CEC.

Though N.C. Saxena feels that the idea is good in principle, he says that practical problems need to be solved and a comprehensive study needed to be done. “What would happen if the central government falls bef­ore its five-year term? In that scenario, all 29 states and two Union territories will have to hold fresh elections,” he says. He spoke to Outlook before Jammu and Kashmir became a UT with a legislature.

The government’s proposal for a one nation-single water tribunal has also been opposed by some states on the ground of increased centralisation”. The Union cabinet rec­ently approved the Inter-State River Water Disputes (Amendment) Bill, 2019, for creation of the single tribual to deal with all inter-state water disputes. “This is tinkering with the system. It wouldn’t help. This amendment in the inter-state water dispute act doesn’t change anything significantly. Unless they look at the nature of the disputes or the nature of the river and the eco system, nothing will change” says Himanshu Thakkar, co-ordinator of the South Asia Network on Dams, Rivers and People.

In Tamil Nadu, parties have already raised concern about the single water tribunal hindering the implementation of the verdict of the Cauvery Water Disputes Tribunal (CWDT). “Why did the Central government introduce a single water tribunal?? They clearly want to interfere in the state’s autonomy,” says Kanimozhi.