Nutrition Warriors | In Naxalite Land, A Doctor Couple's Crusade To Save Tribal Communities In Jharkhand, Odisha

Prasanta Tripathy and Nirmala Nair left global careers to settle in Chakradharpur. They set up Ekjut in 2002 to provide health and nutrition training on community participation
Damayanti Datta | Jan 09, 2020 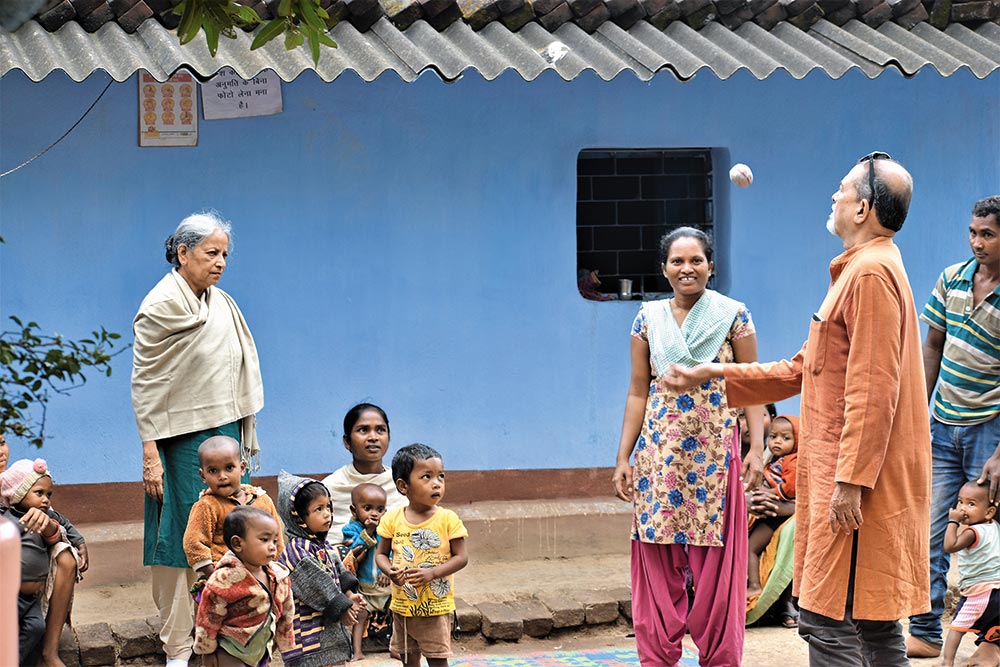 Ancient trees close in overhead on the long, undulating road from Khunti to Chakradharpur in Jharkhand, as the musty smell of red earth wafts up, waterfalls cascade down craggy rocks and forest-clad hills alternate with valleys in the distance. Yet, you are warned: it is part of the Naxalite ‘red corridor’.

There are many ways to understand danger here. One way is through the story of husband-and-wife doctor duo, Prasanta Tripathy and Nir­mala Nair, who left global careers to settle down here, jettisoning all fears and expectations, for an opportunity to solve a crucial problem and avoid a greater danger. “I am from Chakradharpur,” says Tripathy. “I grew up here. It was repaying my debt of gratitude to my birthplace.”

The greatest danger was the unrelenting grip of malnutrition on the area, spawning stunted and underweight children. Tripathy and Nair found very little data on the health status of isolated communities—Ho, Santhal, Oraon, Juang, Munda and Bhuyian—tribal communities, as well as soc­ially disadvantaged non-tribal people.

They set up Ekjut, as a non-government-acade­mic consortium, in 2002, to provide a health and nutrition training programme based on community participation that would empower mothers and result in healthy babies. Woman volunteers trained by the duo went to remote villages, enco­uraging women and adolescent girls to think thr­ough gender issues, especially maternal-new­born health, and then come up with strategies to tackle those. “At the core of the Ekjut model is the idea of unleashing community spirit,” adds Nair.

Naturally, this stunning success did not happen in a vacuum. Ekjut, along with the NGO PRADAN and the Centre for International Health and Development (University College, London), identified three districts. Between 2005-2008, they sta­­rted work with 250 women’s groups in 400 villages, where the neonatal mortality rate (NMR) stood at around 60 per 1,000 births. They can now prove that NMR had dropped by 45 per cent in three years, while post-natal depression was down by 57 per cent. Positive change was recorded in hygiene, newborn care and child ­rea­­­ring.

The efficacy of ‘participatory learning action’, as the Ekjut model is being called, was validated in 2013, after The Lancet and the World Health Orga­­nization evaluated Ekjut’s work in 600 villages across eight districts of Jharkhand and Odisha, inv­olving over 20,000 women. Data again proved its success: a 20 per cent reduction in maternal deaths and 30 per cent in neonatal deaths. Ekjut received the 2015 WHO Public Health Champion honour. By 2016, the Centre announced its decision to use the model to bring down maternal and neonatal deaths in eight states.

Tripathy and Nair are sharpening their model. From storytelling to visual cards, role playing to theatre and music—the power of community crosstalk finds new channels of expression. “It’s community partnership all along,” says Trip­athy. “Our job is to explore what more can be done.”

By Damayanti Datta in Chakradharpur