Home Story Is A Woman An Individual Or Just The Bearer Of A Child?

Is A Woman An Individual Or Just The Bearer Of A Child? 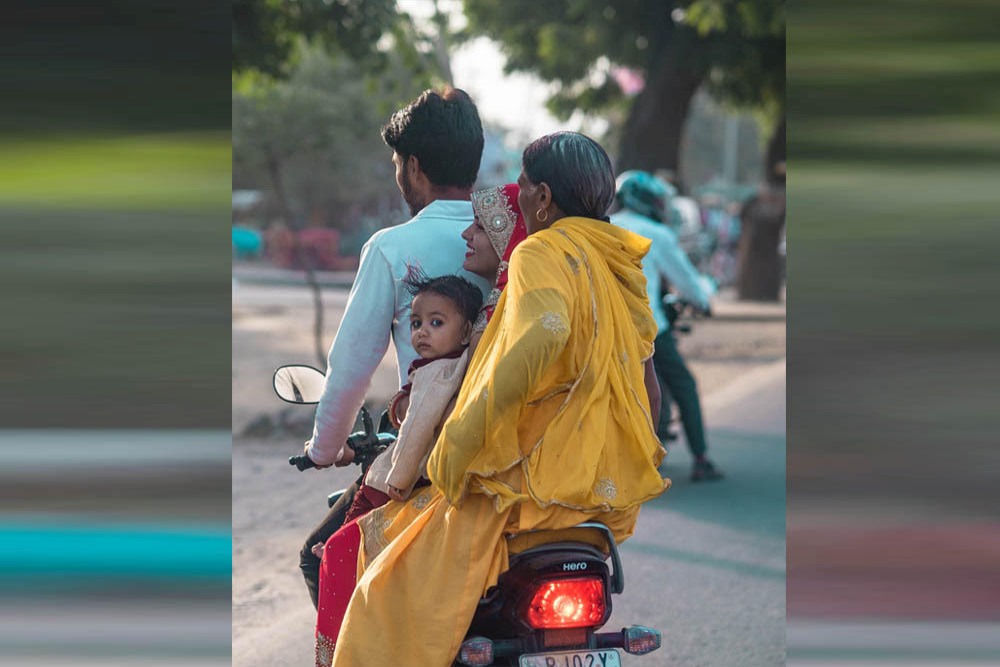 -A woman waits, along with children, until 2-3 pm, for the man to arrive and be served food first.

-A woman allocates little or no food to herself, affecting the health of the child she is carrying or caring for.

-After childbirth, the mother is no longer a priority—which is reflected in poor postnatal care compliance. The entire health system is highly women-centric, with virtually no male health staff at any level.

Gender bias and inequity impose substantial costs on a nation’s productivity, economic growth as well as social protection policies. In India and South Asia, gender discrimination is one of the most significant underlying factors behind poor nutrition.

The differential attitude towards boys and girls in India, at the level of households, communities, health facilities and in the processes and institutions that determine policies, resource allocations and decision-making, has been a much-researched subject. That this disparity has a far-reaching impact on the girl child’s health, nutrition, literacy, employment and social status vis-à-vis her male counterpart, at various stages of her life, also has been shown by various studies. Therefore, there is a need for gender equity in access to resources and opportunities.

While we know gender discrimination exists at the household level, whether it manifests itself as differential care for under-2 boys and girls, is not evident.

Gender differentials in health and nutrition indicators are traditionally viewed through the prism of disparate infant feeding practices at the household level and incongruent health-seeking behaviours for boy and girl children. The questions that need to be addressed are:

•What is the degree or extent of gender discrimination in feeding practices and health interventions for children less than 2 years?

•Are there other causes that have a profound impact and bearing on the extent of malnutrition among boys and girls less than two years?

Results of a new research conducted by the Child in Need Institute (CINI), a top national NGO, in partnership with DFID, across two districts of West Bengal—Uttar Dinajpur and Borough VII of Kolkata—under its first 1000 days care projects, is presented here.

It is a community-based development intervention, aimed at improving health and nutrition of the mother and child. The project is based on a facilitatory process that works toward bringing in behavioural change in communities as well as ensuring optimal availability and utilisation of government health and nutrition services.

The study also clearly indicates a considerably higher percentage of boys, under age two, being severely malnourished in both rural and urban project areas, as compared to girls of the same age. 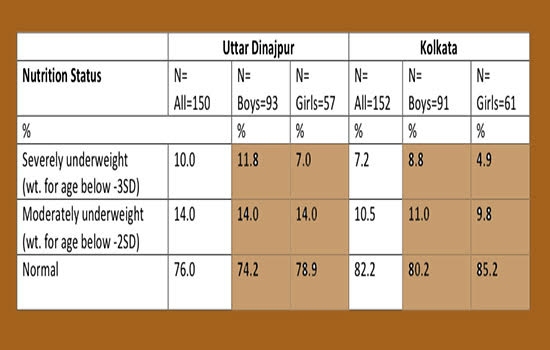 About 39 per cent women did not adopt optimal Exclusive Breast Feeding practices; Out of them, 58 per cent were mothers of boys and 42 per cent of girls. Deviations included giving water during summer months as well as supplementing breast milk with cow or tinned milk.

Most of the other sub-optimal practices, such as lower frequency of feeding (2 to 3 times), poor hygiene, more dependence on milk and biscuits rather than semi-solid or solid food is common to both boys and girls.

The weakest link in infant feeding practices is complementary feeding where behaviour change is the toughest to achieve; only discernible gender differentiation in complementary feeding practices is with regard to the initiation, traditionally onset of 6 months for boys and 7 months for girls. The practice of feeding older and younger children together also limits the food intake of children under 2 years, as well as the mother’s ability to monitor the same.

Among minority communities, both pregnant and lactating women observe fasting or ‘Roza’ during the festival month of ‘Ramzan’ leading to hospitalization of few fasting women who were extremely anemic and dehydrated.

Almost 1/4th of the women (mothers of equal number of boys and girls), conceded to having tried some form of tinned food.

Many mothers were unable to complete the nutrition counselling and care sessions, due to domestic chores and childcare responsibilities

Behind early age of marriage and first birth, the following reasons were found:

•Death of one or both parents; large families

•18 of the children were third or more in the order of birth, indicating the toll of repeated pregnancies on the women

•Other than the CINI workers, currently no other source was found for information and training of mothers

•Wide variation in breast feeding initiation from immediately after delivery to 24 hours or more, especially in case of complications during child birth

•Same lopsided approach from health services, with hospitals not even mandating postnatal care checkups in the discharge summary

•Less than 1/3rd occupancy in Nutrition Rehabilitation Center (NRC) due to several practical bottlenecks; leaving behind family and older children for such long periods of time is not feasible

•Nutrition Counselling and Care Session (NREP), is a part of CINIs ongoing efforts to recover children from mild and severe levels of malnutrition and prevent growth faltering

•Only one government-run Nutrition Rehabilitation Center (NRC) catering to all of Kolkata and South 24 Parganas; situated in the premises of B.C. Roy Memorial Hospital for Children

•Despite knowledge and awareness of the mothers, due to lack of support from health systems, the early initiation of breast feeding is not being achieved

•As up to 96 per cent of the deliveries in the urban set up are institutional; Early Initiation of breast feeding is at the discretion of the hospitals; completely beyond the sphere of influence of the mothers or the other family members

•Remarkable compliance with ANC, TT and Institutional Delivery as the entire focus is on child survival

-Out of the 2/3 of women who adopt some form of contraception, the Oral Contraceptive Pill is the most preferred option and injections
are gradually becoming popular

•For the small number of women who have undergone ligation, the entire household duties are shouldered by them without any help

•It is common practice for the woman to wait with the children until 2-3 pm, for the man to arrive and be served first

•Male Involvement in birth spacing is nonexistent-on an average, in a 1000+ population only 25 to 30 eligible couples would be adopting condom as a Family Planning method

•Majority of the families have only one meal in a day, which is home-cooked

•The extra workload puts the woman under a lot of stress and influences her state of mind, physical and emotional bonding with the infant; adversely affects her ability to practice exclusive breastfeeding irrespective of the child’s gender

•The urban slums have eateries serving low-cost, unhygienically cooked, food, with poor nutritive value; being affordable and easily procurable, families begin the day with this

•The traditional food in Muslim families is rich in oil and spices and comprises more of meat than vegetables; Since nothing extra is cooked for an under-2 child, the complementary feeding gets further delayed and compromised

•Further improvement and attention is required in early registration of pregnancy—most registrations found to occur in the second trimester.

•In general, institutional delivery is the preferred option in all families in urban slums.

•After child birth, the mother is no longer a priority—which is reflected in poor postnatal care compliance.

•Among all the institution-based health services, postnatal care needs a lot of improvement

At the systemic level:

•Recruit male health workers to work closely with the men in the community and increase male involvement in maternal and child care.

•Sensitisation of the workers at various levels, in both health and ICDS, to treat the woman as an individual, with her own rights, and not just as the bearer of the child

At the community level:

The consequences of nutritional status of a female child is a process which goes along her whole life-cycle, and without appropriate intervention, leads to intergenerational transfer, from mother to child.

CINI, or the Child in Need Institute, is a national humanitarian organisation aimed at promoting sustainable development in health, nutrition and education of child, adolescent and woman in need in India. (To know more about CINI’s work, please visit: https://www.cini-india.org/)