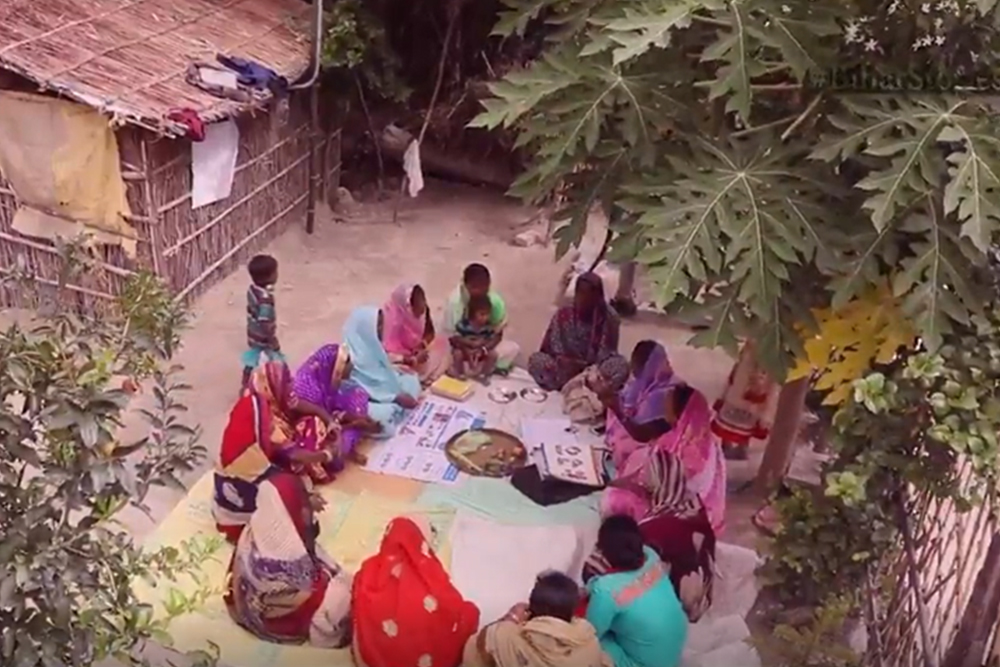 How self-help group JEEViKA is helping women realise the benefit of supplementary feeding.

Improving nutrition contributes to productivity, economic development and poverty reduction by improving physical work capacity, cognitive development, school performance and health by reducing disease and mortality. Poonam Devi, from Muzaffarpur in Bihar, showed how true this holds by associating herself with JEEViKA self-help group. She not only improved her socio-economic status through an enterprise (concrete ring-making) but also followed the recommended feeding practices for her second child, which she was not able to do for her first born. Both the efforts were complementary in nature to ensure good nutrition for the family and reduce morbidity. She could follow the complex practices related to complementary feeding and ensured diversity, which is a major challenge for most mothers due to lack of knowledge and access to diverse food groups.

When Poonam Devi, from Bargoan in Muzaffarpur district, became a mother for the first time, nearly four years ago, she followed conventional practices for feeding her daughter Sakshi. For the good part of her first year, Sakshi was fed on mother’s milk, formula milk, water, and a few biscuits each day. Proper weaning began well after the child’s first birthday, with Sakshi mostly eating a hand-mashed mixture of rice and pulses out of the elder’s plate. As a result, she was always sick and didn’t grow healthy. Poonam recalls “My daughter was given tin milk instead of breast milk. That is why she kept falling ill.” Now she could establish the causal link of nutrition and morbidity and repents for her ignorance.

Two years ago, Poonam joined JEEViKA to overcome a financial crisis in the family. Her husband lost his business as a toddy maker owning to a fall from the palm tree. With a small loan from JEEViKA, Poonam and her husband were able to begin a concrete rings-making-business for toilet pit construction, and very soon started earning profits. However, there was more to learn from JEEViKA. Through sessions and experiential learning activities during group meetings, Poonam was able to learn many new things about health and nutrition.
When her son Vishal was born, Poonam was already well equipped with knowledge about appropriate childcare and nutrition, and began practicing what she had learned in the group meetings. Until six months, she gave her child only breast milk, not even water. When Vishal completed six months, Poonam initiated weaning, giving him a variety of foods in his daily diet. Unlike for her daughter, she gave him vegetables, fruits, eggs and fish, in addition to cereals, pulses and milk. Vishal even had a personal bowl for himself to eat his food. With an active and chubby Vishal playing next to her, Poonam proudly narrates “as soon as he turned seven months I began feeding him with a variety of foods; rice, pulses, vegetables, eggs, milk, mangoes. Vishal is very healthy and active.”

Poonam’s self-efficacy was built through the multiple interventions being organised by JEEViKA at the community level. When women gathered during ‘Poshan maah’ or nutrition month (September’18) in Bargaon village, Poonam was one of the proud mothers felicitated by the Village Organization for following good practices in complementary feeding (the process starting when breast milk alone is no longer sufficient to meet the nutritional requirements of infants, and other foods and liquids are needed, along with breast milk). She won the title of ‘Purak Aahar Ratna’ or the “star of complementary feeding” and was given a bowl and spoon in which she feeds Vishal.