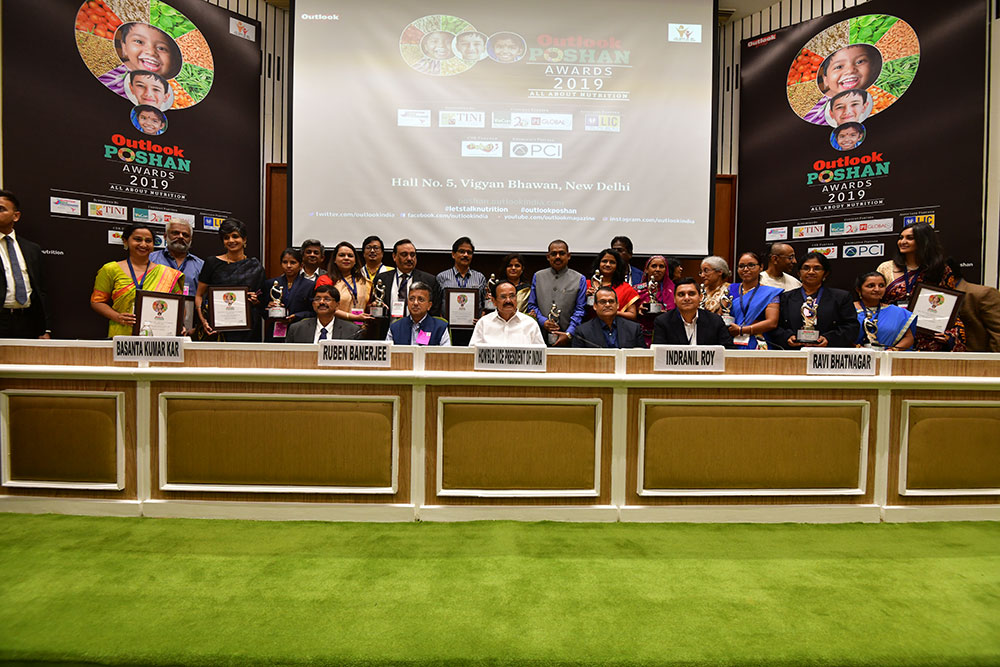 At Outlook Poshan Awards 2019, we acknowledged the contributions of individuals and institutions who have made substantial impact in the field of nutrition.

He is called the Father of Green Revolution in India for introducing and further developing high-yielding varieties of India. His advocacy of sustainable agriculture leading to an ever-green revolution makes him an acknowledged world leader in the field of sustainable food security. Time magazine named him as one of the twenty most influential Asians of the 20th century and one of the only three from India. He was awarded the Padma Shri in 1967, Padma Bhushan in 1972, and Padma Vibhushan in 1989. Prof. M.S. Swaminathan is the Living Legend at Outlook Poshan Awards 2019.

In the year 2006, Government of Odisha formed an autonomous society named as 'Odisha Livelihoods Mission (OLM)' under the aegis of Department of Panchayati Raj and Drinking Water. OLM has put in place a dedicated and sensitive support structure, to take the rural poor households out of poverty line trough capacity building, financial assistance and self-reliant institutions. As a part of Rural Livelihood Mission OLM is an independent Mobilization of poor to form their ‘own institutions’ is the primary objective of the project; for which strong institutions of the poor in the form of SHGs are constituted society working under the Department of Panchayati Raj and Rural Development. Ensuring sustainable livelihoods for the rural through improved access to financial, livelihood and other support services, with institutions of the poor plays a catalytic inter-mediating role.

It was National Health Policy,2002 and National Population Policy 2005. The pilot project was initiated by US-Centre for Disease Control (CDC), WHO in collaboration with NHM, Government of Haryana, PGIMER.in two blocks of Ambala for wheat flour fortification. The project started in 2015, and was scheduled to be implemented in three phases over a period of 5 years.

Registered under the Mumbai Act No. 29 in the year 1950, the programme has helped in creating an evidence-based model for addressing malnutrition wasting and stunting among children in the urban slums of Mumbai. Its aim is to build responsive communities and systems for improved child and maternal health and nutrition services for prevention and addressing the issue of child malnutrition in two urban informal settlements in Mumbai. It works on the principle of strengthening public health systems and improving health seeking behavior of communities.

Rural Livelihoods Project (BRLP), locally known as JEEViKA aims social & economic empowerment of the rural poor in Bihar. SNEHA's Child Health and Nutrition programme Aahar, has helped create an evidence-based model for addressing malnutrition, wasting and stunting among children in the urban slums of Mumbai. The programme works on the principle of strengthening public health systems and improving health seeking behavior of communities.

The program aims at providing nutrient requirements for national programmes aimed at vulnerable groups. NIN carried out nutritional assessment surveys on individuals as well as on families, covering different age groups and different socio-economic groups. Its public health nutrition reports have been used by policymakers and more so by the Planning Commission.

Kavita was appointed as an Anganwadi Worker under Integrated Child Development Scheme in September, 2014. Her commitment to her work reflects from the distance she travels on daily basis from Greater Noida, Uttar Pradesh to Nardan Basti, where she was appointed as Anganwadi Worker in December 2015. She has two children who are studying. Kavita has been teaching children below six years of age since she started working many years ago and she likes to work with children in this age group which motivated her to become an anganwadi worker.

She is a graduate who started working with ASHA in Majawada Village of Bhindr Block of Udaipur last year. The major challenge she found was the low attendance of Pregnantwomen the Mother Child Health Nutrition day. Trained to conduct community meetings for mobilizing them on various messages, she used that platform to reach out the pregnant women on the importance of Ante Natal Care. She tried hard and after three meetings she started getting results. Now after conducting five PLA meetings in her village she has increased number of PLWs coming to the MCHN site.

Ms Shanta Garg is a postgradate who works for ASHA in the Dulawato Ka Guda village of Badgaon block of Udaipur. During home visit, she came to know about two pregnant women, who were not registered to receive Ante Natal Care at the village health care centre. She found that their mothers-in-law were restricting them to go for the AWW centre. She started meeting mother-in-law of the women, and after few meetings convinced them to register at AWC. She is leaving no stone unturned to get every beneficiary in her catchment area avail all the services.

Melghat region, comprising two blocks, Dharni and Chikhaldhara, situated in Amravati district is home to the tiger reserve of Maharashtra. This region has the highest numbers of malnutrition and infant mortality cases. As an ASHA worker, she undertook several activities in the community to address malnutrition. Through the Mata Samitee, I was creating a competitive environment within the communities. She also organized lots of activities in the community including rally, Cleanliness campaigning and celebrated various festivals.

Another Anganwadi worker from Amravati, Reshma Shankar Dhote, focused on individual household visits and provided counseling especially to pregnant women; organised nutrition rallies, meetings with teenage groups, and awareness on various health issues on teenagers, lactic and pregnant women’s. Through Annaprashan program, the women got clarity about what kind of food should be fed to child for better health. I always give more focus on VHSND where I ensure immunization and ANC check-up through maximum participation.