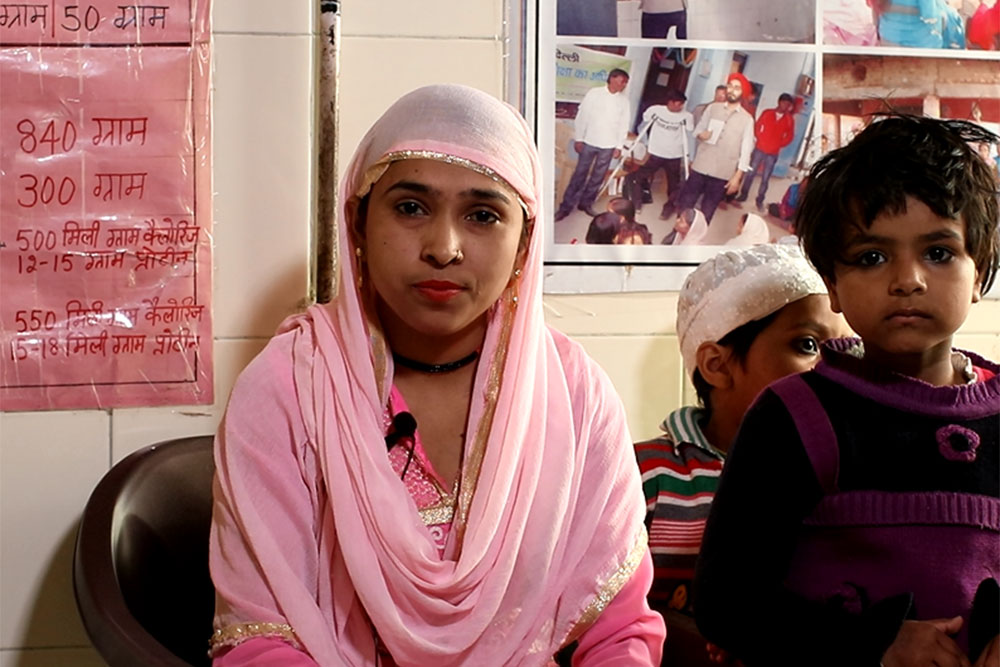 Shakeela with her kids at a NGO in Delhi.

Nutrition Warrior: Meet Shakeela, A 25-year-Old, Who Saved Her Child From Malnutrition

When Shakeela's second child, Aliya was born, the baby was detected as moderately malnourished.

Shakeela is a 25 year-old-woman living in Nardan Basti in Lal Kuan, Delhi.

She is a home-maker and her husband is a daily wage labourer. Both of them are migrants from Jhansi in Uttar Pradesh.

When Shakeela's second child, Aliya was born, the baby was detected as moderately malnourished. The reasons could be many, including lack of awareness regarding the proper nutritional needs of children, unhygienic surroundings and lack of care during the pregnancy. In September 2014, when Aliya was almost a year old, her weight was around 1.5 kg lower than normal. She would also regularly fall sick and suffer from loose motions and cold.

Like Shakeela’s family, most of the other families of her locality, populated by domestic helps and daily wage earners, have very limited means and most live on incomes that classify them as Below Poverty Line (BPL) households. Shakeela doesn't enjoy much support from her in-laws either. She looks after her three children all by herself, while her husband toils to earn a livelihood for the family.

It was for Aliya's treatment that Shakeela got involved with the Anganwadi Centre and Matri Sudha, an NGO that works with undernourished children and their mothers. She learnt about the specific foods that she should feed Aliya and those which she should herself avoid for her daughter's health. And more than anything, Shakeela through such association found the support of people who would guide her and help her daughter overcome malnutrition.

While breast-feeding Aliya, if Shakeela ate rice the baby would get loose motions. If she ate something sweet, it would again affect Aliya's health. With advice from Anganwadi workers, Shakeela decided to give up on rice and sweets altogether till her daughter's health improved significantly. And it started showing results.

Aliya gained normal weight by 2016, and now she is a healthy child who attends school regularly and plays with her brothers at home.

Shakeela's case is also a lesson in spousal support. While her in-laws didn't offer her any help for dealing with Aliya and her two other children, her husband would step in to help her whenever he could, if he was not working.

Even after Aliya regained normal weight and her malnutrition was successfully treated, Shakeela didn't give up on her association with the Anganwadi Centre and similar awareness groups.

She is now always at the frontline on the issue of helping families tackle malnutrition among children and is much sought after in her locality for providing advice on nutritious baby food.

Shakeela is determined to see her children through school. She walks 4 kilometres every day to drop Aliya to school and pick her up.