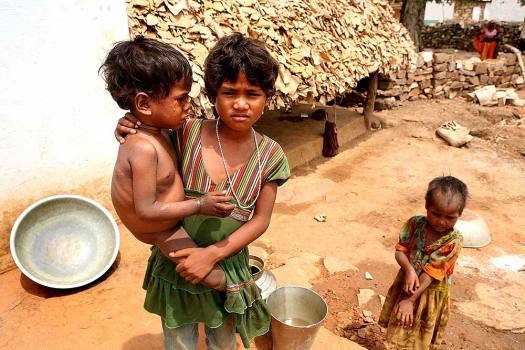 The 2018 Global Hunger Index ranks India at 103 out of 119 countries. File Photo/Outlook

Growing Malnutrition: An Emergency Staring India In The Face

With a population of over 1.25 billion, 22 official languages and half a dozen major religions, India has always been a country with a unique blend of paradoxes. With a total Gross Domestic Product (Nominal) $2.848 trillion in 2018, India has become one of the fastest growing economies of the world, leaving even France behind. There is numerous data to substantiate our claims on accomplishments. Our glorious traditions, rich history and heritage, vibrant and secular democracy, multicultural, multilingual peaceful co-existence have given India a special place on the global map.

However, today, even after seven decades of Independence, India ranks poorly in terms of its food and nutrition security indicators.

As India aims high in the global economic pecking order, a sobering factor troubling its grassroots needs urgent redress: malnutrition, under-nutrition and the resultant stunting – all of which can prevent the country’s upward soar.

According to the Global Nutrition Report (GNR) 2018, one third of the world's stunted children live in India. India has the largest number of children who are stunted at 46.6 million, followed by Nigeria (13.9 million) and our neighbour Pakistan at 10.7 million. 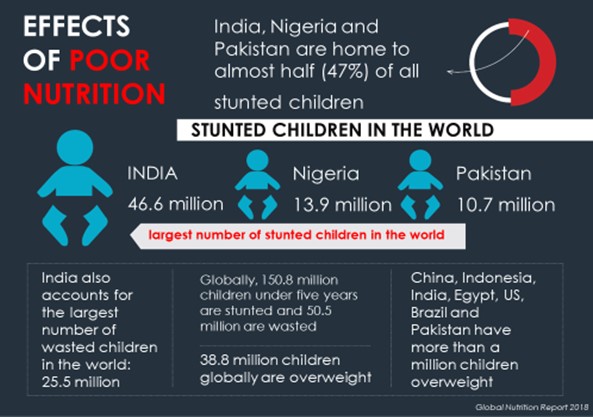 In another report, the 2018 Global Hunger Index ranks India at 103 out of 119 countries. With a score of 31.1, India suffers from a level of hunger that is serious.

Data from the National Family Health Survey (NFHS) IV says that around 38.4 per cent of children under 5 years are stunted in the country. Increase in childhood wasting in 10 years -- from 19.8 per cent to 21 per cent (NFHS-III and IV) remains a critical concern with rising moderate acute malnutrition and severe acute malnutrition. Micronutrient deficiencies, also known as ‘hidden hunger’, remain high. It has also been reported that 20.6 per cent women and 18.9 per cent men are obese and overweight (NFHS-IV) and India runs the risk of an impending epidemic of obesity, diabetes and other non-communicable diseases related to poor nutrition. Thus, with both under-nutrition and rising obesity India has a double burden of malnutrition which indicates a broken food system that needs urgent attention. 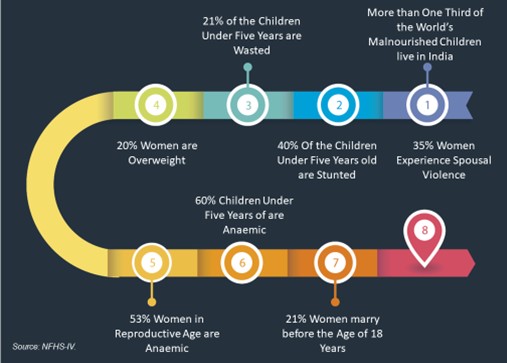 Women play a strategic role in ensuring sustainable food and nutrition sovereignty and security. The right to food and nutrition during first 1000-days of the child- the first window of opportunity and among the adolescent girls- the second window of opportunity, have a profound impact on a child’s ability to grow, learn and thrive—and a lasting effect on a country’s health and prosperity.

However, in India, 26.8 per cent women marry before the age of 18 and 28.8 per cent married women face domestic violence. This has implications on the food system and decision and control on accessing safe and nutritious foods. The patriarchal system and its overarching impact on women is the single largest obstacle to attaining food and nutrition equity.

Breastfeeding and complementary feeding from the birth up to two years of age remain a critical factor on child nutrition. However, it is found that only 54.9 per cent children in India aged 0-5 months are exclusively breastfed and 8.7 per cent children aged 6-23 months receive an adequate diet demanding focus on demand generation safe and nutritious food through social behaviour change communication.

Over 53 percent women of child-bearing age and over 58 percent of children under five are anaemic (NFHS-IV). Stunting is widespread across majority of the country’s districts. In 70 percent of the districts, stunting rates are over 30 percent, and in more than half of these it exceeds 40 percent, while in more than a tenth of them the stunting rates are over 50 percent.

Around 57 per cent of under-five children suffer from Vitamin A deficiency, and more than 13 million infants are susceptible to iodine deficiency disorders (UNICEF, 2009).

A fourth of the country’s districts exceed the national average for the prevalence of all three indicators of under-nutrition - stunting, wasting and underweight. It has also been reported that 20.7% women and 18.6% men are obese and overweight (NFHS-IV). India runs the risk of an impending epidemic of obesity, diabetes and other non-communicable diseases related to poor nutrition. With both under-nutrition and rising obesity India has a double burden of malnutrition that needs urgent attention.

It is estimated that the annual gross domestic product (GDP) losses from low weight, poor child growth and micronutrient deficiencies average 11 per cent in Asia and Africa, greater than the loss experienced during the 2008–2010 financial crisis (GNR-2016).

Malnutrition is a silent emergency engulfing the nation and good nutrition has the power to empower the present and future generations. The demographic dividend which is strangulated in infancy due to poor nutrition can suddenly start blooming with good nutrition.

Due to poor physical and cognitive ability, for generations, certain sections of the society continue to remain under abject poverty and marginalisation and continue to serve as unskilled and semiskilled labourers throughout life. This results in poor income and living a life of indignity and in poor health conditions. Malnutrition during the first 1,000 days of life -- starting from pregnancy to the first two years -- is one of the underlying reasons.

Micronutrient deficiency, popularly known as hidden hunger such as deficiencies in iron, iodine, vitamin A, Zinc, Vitamin D and Calcium can cause mortality and morbidity. It has severe consequences – like low cognitive development, lowering of IQ, reducing physical work capacity, adverse maternal and neonatal outcomes, reduced individual earning and ultimately losses to GDP.

Studies also suggest that not only are chronically undernourished children short in physical stature, but the development of their brains — their “grey-matter infrastructure”—is also stunted.).

Although recent rates of decline in under-nutrition in the country are encouraging, India’s burden of under-nutrition remains very high and is pervasive. One fourth of its children are born with low birth weight, 35.7 per cent of children under five are underweight (weigh too little), 38.4 per cent are stunted (are too short) and 21 per cent are wasted (are too thin) (International Institute for Population Sciences, 2015-2016). 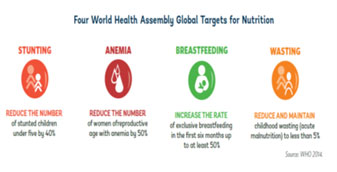 On the UN Sustainable Development Goals (SDGs) front, India is on track to meet the World Health Assembly (WHA) targets for exclusive breastfeeding and ‘no increase’ in the overweight category, but it will not meet the targets for reducing stunting and anaemia unless new approaches and concentrated action are undertaken. 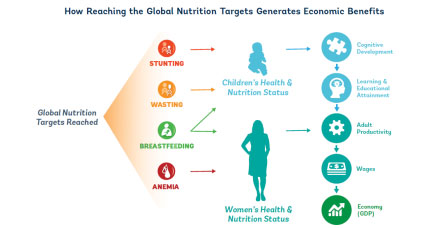 Urgent, concerted and comprehensive action on several fronts is called for to ensure that India’s children realise their full potential - physical and cognitive, and the rising trend of obesity and overweight is arrested and reversed. Only then can the country meet its World Health Assembly and Sustainable Development Goals.

After the depressing data, the good news is that India has the highest level of public investment in food and nutrition security through its public funded programmes and has entrenched the right to food and nutrition in its constitution and law.

In recent years, India has also achieved substantial gains on the nutrition front. Although at the all-India level there are problems, but as per the last National Family Health Survey, states like Arunachal Pradesh, Tripura, Chhattisgarh, Punjab and Mizoram, Gujarat, Odisha, Delhi and Assam have shown exemplary success in reducing stunting. Similarly, Meghalaya, Mizoram, Bihar, Jharkhand and Kerala have shown success in reduction of wasting while Sikkim, Assam, Chhattisgarh, Odisha, Rajasthan, Bihar and Jharkhand have shown success in reduction of anaemia.

India’s POSHAN Abhiyaan; Prime Minister’s Overarching Scheme for Holistic Nourishment (erstwhile National Nutrition Mission)) with a measurable target to achieve the goals for a mission malnutrition-free India is a move just in time. It targets the reduction of stunting, under-nutrition, anaemia (among young children, women and adolescent girls) and low birth weight by 2 per cent, 2 per cent, 3 per cent and 2 per cent per annum respectively.

The Abhiyaan would in fact strive to achieve fast-forwarded reduction in stunting from 38.4 per cent (NFHS-IV) to 25 per cent by 2022. A number of state governments have their own flagship programmes on nutrition with a very high level of policy and political commitment. All these are bound to change the very nutrition landscape of India.

The programme would go a long way in achieving the target of Suposhit Bharat, Sashakt Bharat.

Awareness about the need for proper nutrition has spread across villages in India. For example, in Chiranjipur Village in Bachhwara block of Begusarai district in Bihar, women community change leaders of Sangam Village Organization have received high accolade and appreciation for spreading the message of good nutrition. What could proper nutrition achieve for their sons and daughters: the answers ranged from a good groom for their daughter who has grown tall thanks to good nutrition, or not having to go to the doctor at all, or the son meeting the stringent physical requirements needed to join the army or police.

Though the beginning to the end of malnutrition and under-nutrition has come over 70 years after Independence, it looks a promising one indeed. To take advantage of the demographic dividend and transform the country, India needs a nutrition revolution with women at the forefront.

(Basanta Kumar Kar is the Country Director of the Project Concern International/India. He is the recipient of prestigious global ‘Transform Nutrition Champions’ award for outstanding contribution to nutrition in South Asia and ‘Odisha Living Legend’ award for contribution to public policy around nutrition. For his decades long contribution to champion the cause of sustainable food and nutrition security in India and globally, Kar is also known as the ‘Nutrition Man’.)