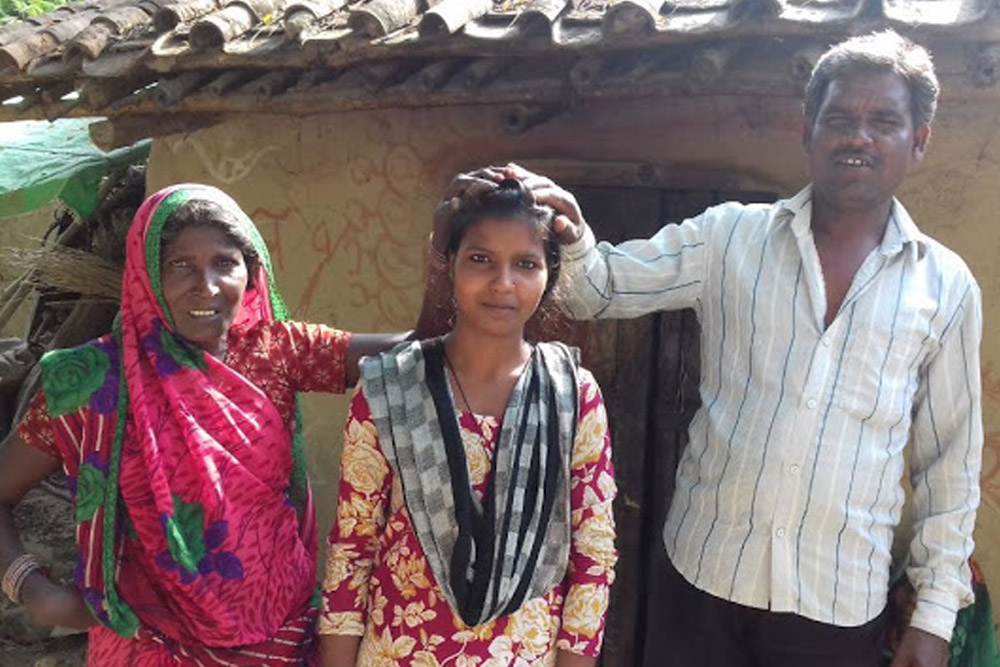 In 2017, the People’s Vigilance Committee on Human Rights (PVCHR), with the support of Child Rights and You (CRY), adopted 50 villages and a couple of slums to work on the issue of child survival (maternal, neonatal health and nourishment) in the most marginalised communities in four blocks of Varanasi district.

Kotali Nut lives in Aura block of Varanasi district in Uttar Pradesh. Kotali and her husband Mannu Nut have a monthly income of around Rs 3,000 which is very difficult to fulfill basic needs. Ever since they were introduced to kitchen gardening last year, they are able to include nutritious vegetables in their meal which has had a positive effect on their health.

There was a vacant plot behind Kotali’s house, in Nonari nut ghetto, Phuwarikhurd of Aura block, where she did kitchen gardening, sowing different types of seasonal seeds like sponge gourd, squash, pumpkin, snake gourd, bitter gourd, ridge gourd. She began her kitchen garden in July 2018, thanks to the efforts of People’s Vigilance Committee on Human Rights (PVCHR), and is happy with the result.

“Before we used to eat rice, roti with salt. But now we have a lot of green vegetables with our meals after we began kitchen gardening. It effects our health as well,” she said. Kotali produced around 54 kg of different types of vegetables -- like 15 kg of sponge gourd, 32 kg of squash, 4 kg of pumpkin, 2 kg of ridge gourd and 1 kg bitter gourd. 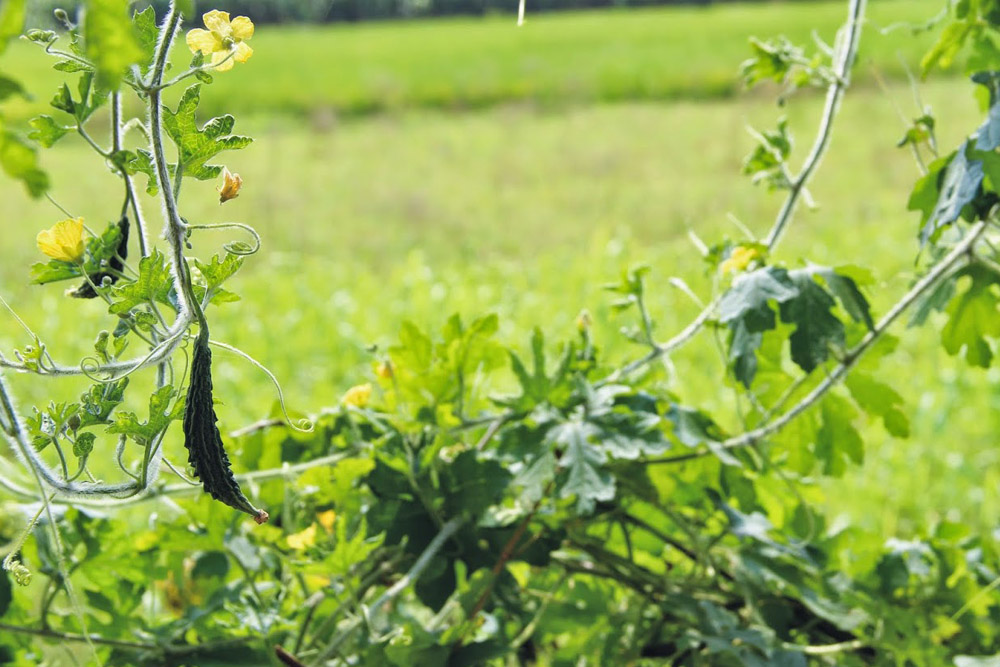 The story is the same with Jarina Nut, wife of Bholai Nut, whose monthly income is around just Rs 2,000-3-000. Like Kotali, Jarina also took to kitchen gardening and is sowing different types of seasonal vegetables. Jarina says she produced 39 kg of green vegetables. “We had enough fresh vegetables everyday for our meals. It is very tasty and healthy,” she said.

Kabutara Nut, wife of Nandu Nut, has a kitchen garden where they grow different types of seasonal vegetables. They have also a hen coop in their home. Initially they were scared thinking the hens would damage the sown seeds, but PVCHR workers informed them about how to protect their land by covering it with bamboo fencing.

Nandu’s son Rajiv helps him to protect the land and in weeding and sorting. Regular follow-up by PVCHR helped to sustain their enthusiasm. They produced 29 kg of vegetables.

In the Musahar ghetto of Phuwarikhurd, Aura block of Varanasi, Sanju and her husband Sushil grow vegetables according to their taste. Sanju says her husband helps with the kitchen garden, sowing seeds, in manuring, weeding, sorting and also protects the land. “When the garden started producing vegetables, we had different types of veggies daily in our meals. We never bought any vegetables earlier because we can’t afford it. Now we share vegetables with our relatives and friends,” said Sushil.

There are 13 Musahar families in the Musahar ghetto, Aayer Village, Harauwa block of Varanasi district. They work as labour. Six men work as a carriers in a hardware shop, some others ride tractors and one family works in a brick factory. A woman also works as a daily wage labourer. They sow crops and graze in other lands for money. They don’t have their own land, but they have some land near their homes where they started kitchen gardening with different types of seasonal vegetable seeds.

In 2017, the People’s Vigilance Committee on Human Rights (PVCHR), with the support of Child Rights and You (CRY), adopted 50 villages and a couple of slums to work on the issue of child survival (maternal, neonatal health and nourishment) in the most marginalized communities in four blocks of Varanasi district. The Right to Survival is one of the four child right categories in the United Nation Convention on the Rights of Children. Survival Rights include the child’s right to life and to fulfilling the needs of a child to lead a happy life. These include nutrition, shelter, adequate living standards, and access to health services for a healthy and happy childhood.

After entering the village, PVCHR did a baseline survey and focused on group discussion to understand the Knowledge, Attitude and Practice (KAP) of the community. Based on the KAP mapping, they prepared strategies based on their interest and influence. The PVCHR team explained how the major problems identified in the baseline surveys were stereotypical thinking, superstition, and lack of trust in the government-sponsored healthcare schemes. The below-par presence of the health Sub Centres, Primary Healthcare Centres, Community Healthcare centres is the main hurdle in the realization of health services for pregnant women and their children.

These communities faced apathy from the village heads and did not get access to various government schemes. Due to lack of knowledge and resources, adolescent girls use dirty cloth during periods instead of sanitary pads. The adolescent girls have no source to obtain information regarding the biological changes in the body and were left to follow longstanding and illogical concepts. 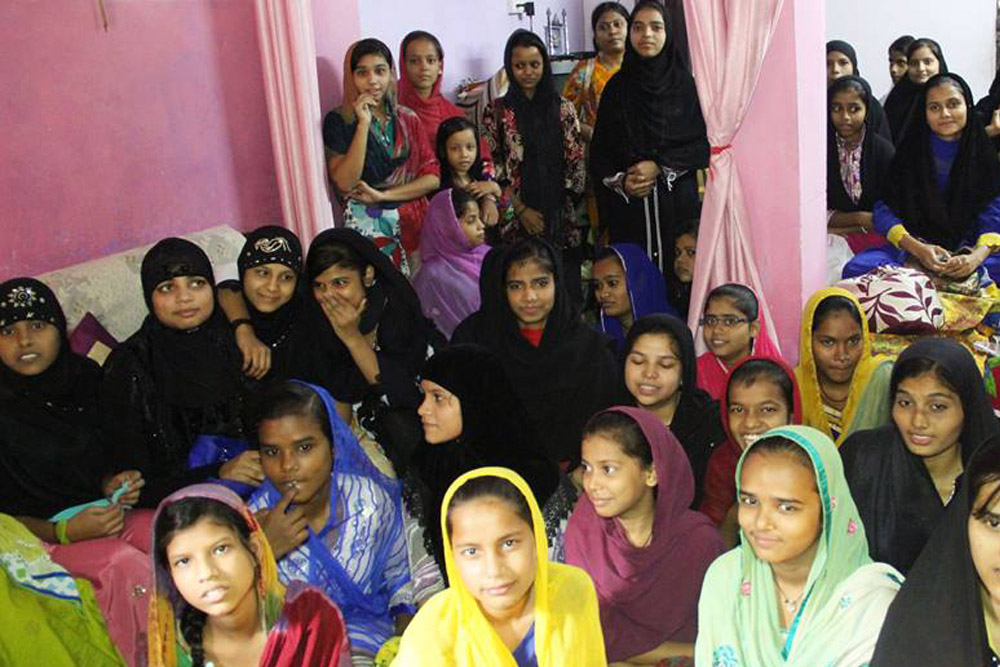 The changes and developments in the bodies of adolescents also affects their health. Adolescents mainly suffer from anaemia and weight loss or low weight. Lack of information is the primary reason behind that. During the analysis of the sample survey conducted across 20 villages in Varanasi, we found that, due to ill-treatment and negligence in the government hospitals, 19 families out of 20 were facing a severe debt crisis.

PVCHR organized a meeting with marginalized people and encouraged them to utilize the vacant plots of land near their homes. They were informed about the importance and process of kitchen gardening.

A Girl Adolescence and Nutrition Fair was organized by PVCHR with the support of New Zealand High Commission in Harauwa Block level in October. The main purpose of the fair was to inform people about various issues related to adolescence such as Reproduction Health, Menstruation, Infection, Personal hygiene and Nutrition.

In the fair for adolescences, issue-based posters were displayed. Posters created on the basis of issues came from meetings and folk schools with girls and their family’s members. Adolescents were aware about the reproduction process, menstruation process, personal hygiene, health, reproductive health and nutrition. The main slogan of the programme through the posters was information to adolescent girls, about reproductive health, nutrition and love. Also, they were told they must care about their health and wear sanitary pads during menstruation. Girls should increase their iron intake by eating green vegetables. The adolescent girls were encouraged to freely speak on menstruation. The girl focused on the slogan, the messages, information and posters and also discussed among each other.