India is the second largest producer and consumer of potato in the world. In the past five decades, potato production has steadily increased from around 8.3 million tonnes in 1980 to 48.6 million tonnes in 2017, an increase of more than 500 percent.

In the past ten years, the production has increased more than 60 percent with both area and yield contributing to the increase. The national average potato yield in 2017 was around 24 tonnes per hectare. However, there is wide variations in yield level within India, ranging from 31.5 tonnes per hectare in Gujarat to 10 tonnes per hectare in Assam. Among different constraining factors for yield growth, the limited availability of quality seed material is considered as the most important factor for lower yield levels in eastern states. The high cost of seed (Rs. 60,000-75,000 per hectare), which accounts for 40-50 percent of the total cost of production, has been a key deterrent for small farmers to take up production in many of these states.

In India, potato seeds are produced in Punjab using seed plot technique and aeroponic technology and transported up to 2,000 km to potato growing states of eastern and southern India. The high transportation cost is borne by the poor farmers who have to pay high seed prices as well. To make matters worse, the high price does not guarantee high quality, thus making it difficult for small and marginal farmers to invest such a large sum in seed purchases which accounts for nearly half of the total cost of production. The spread of aeroponic technology has been limited to Punjab because of its high capital requirement and long gestation period of nearly four years. before any return comes in.

If a low-cost technology can be made available to produce seed potato at cheaper price then these eastern and southern states have immense potential to increase potato production by improving productivity and lowering cost of production. The soil and environment in many parts of the eastern and southern regions are suitable for cultivating potato seed in rabi season (October-March) and in some areas like Hassan in Karnataka and Koraput in Odisha it can be grown in kharif season (July-October) also. Specifically, the northeastern states could be potato seed hub supplying seeds to West Bengal, Odisha and Bihar.

In six weeks, one mother plant can be multiplied to produce 8 plants (Figure 1) and the number goes to more than 15 in 12 weeks. These cuttings are transplanted on the seed bed and once rooted, are moved to net houses or open field for producing mini tubers or seed tubers. This low-cost technology has been practised in Vietnam for decades. 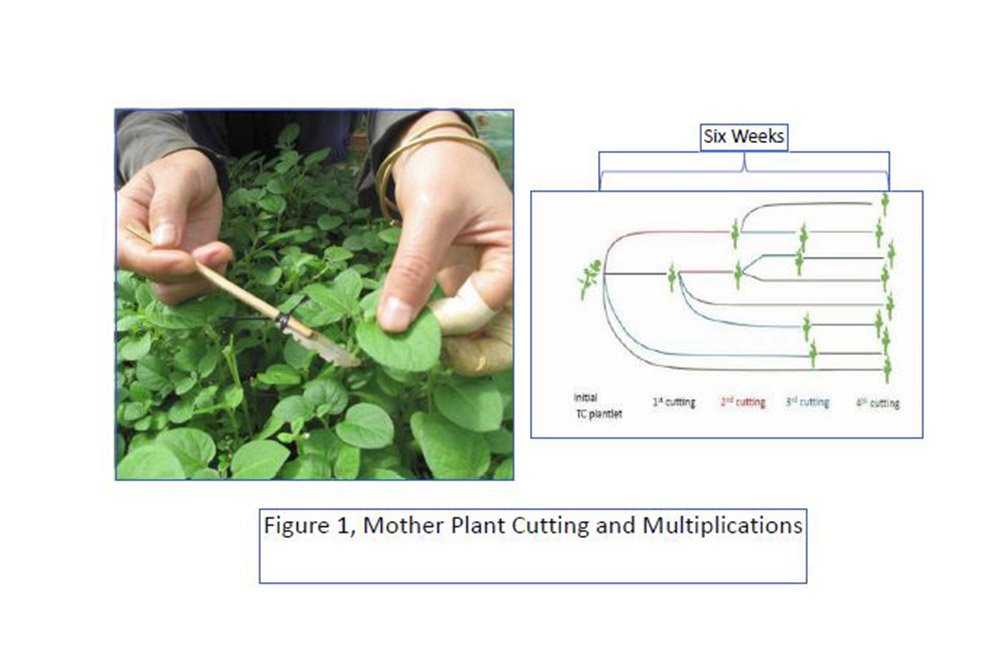 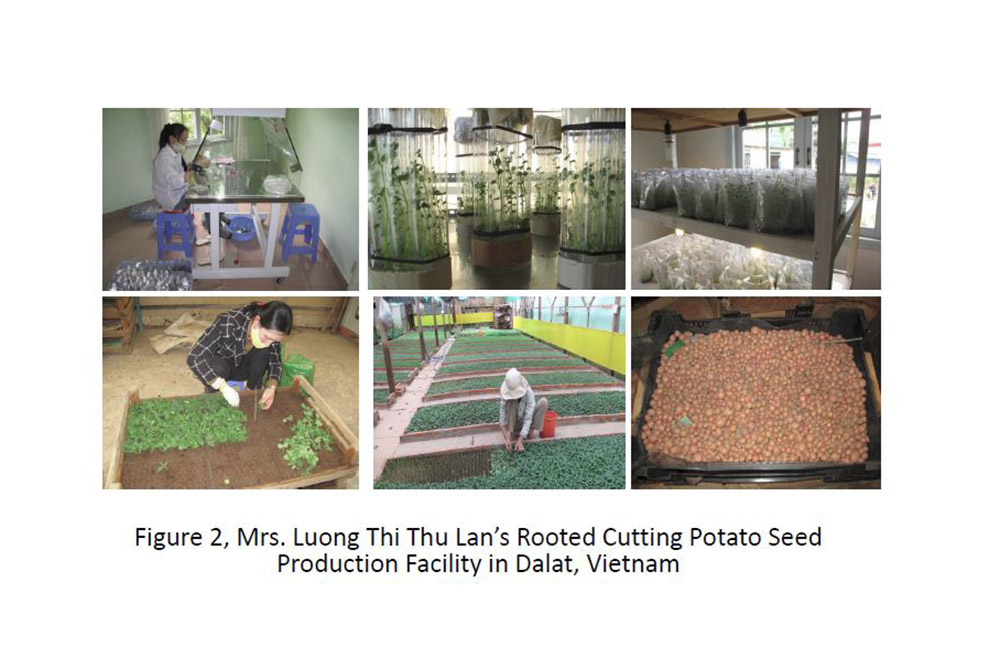 The cuttings can also be transported in flower boxes in 3-4 layers with a sheet of clean plastic between the layers as developed by CIP (International Potato Center) scientists in Africa. These seed tubers are further multiplied and sold to farmers as seed potatoes. Some farmers even directly use the rooted cuttings for producing tubers in the open field. There are even farmers in Vietnam who have set up small tissue culture facilities, screen houses for mother plants and cuttings and finally net houses for transferring rooted cuttings for mini tuber production. Figure 3 shows the apical cutting potato seed production facility of Mrs. Luong Thi Thu Lan’s in Dalat, Vietnam who has been operating the facility for many years now. 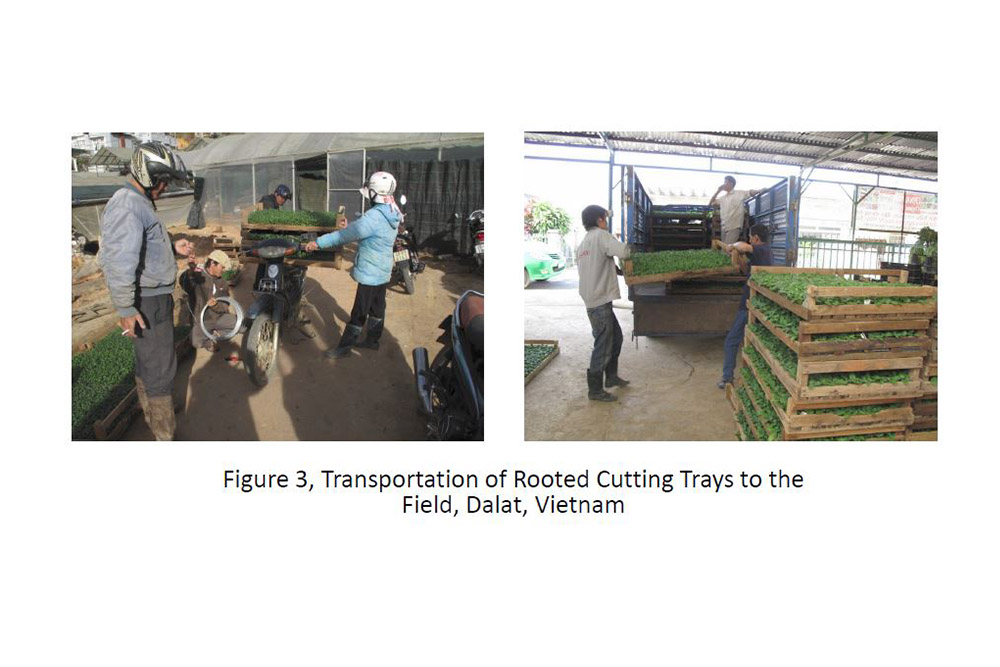 Based on our back of the envelope calculation, a rooted cutting plant is likely to cost around Rs one or even less, and 25,000-35,000 cuttings are needed per acre. Each cutting can produce 7-10 tubers and sometime even more which are multiplied 2-3 times before being sold to farmers as seed.

Demonstrations and Scaling up of Apical Rooted Cuttings

We are setting up an apical rooted cutting facility in Bengaluru in collaboration with the University of Horticultural Sciences (UHS) within their Bengaluru campus. This will include tissue culture facility that will include 20,000 in-vitro plants of popular varieties, 500 square meters temperature-controlled screen houses to produce more than 100,000 cuttings per season and 10 units of temporary net houses with each 0.25 acre to produce seed tubers from cuttings for further multiplications in the open field.

Unlike in Dalat where cuttings are planted in open field as the climate there is most congenial with very less vector load, we plan to grow them inside temporary net houses to suit local conditions of Bengaluru and Hassan. In some other parts of India, it could be possible to grow these cuttings in open field like Dalat. Similarly, a facility is also under construction in University’s Hassan research station. We plan to set up several such facilities in Koraput, Odisha, Central Potato Research Institute (CPRI) Shillong research station.